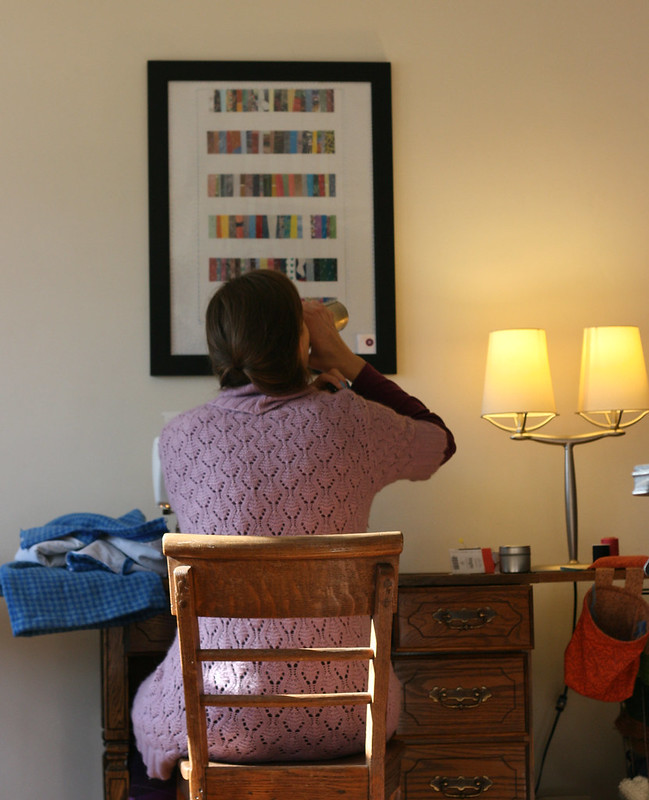 Drinking coffee and getting to work

I usually reserve Monday mornings for blogging and for projects, but often it’s just the blogging and maybe some photography that happens.  When I planned out my time to start this blog, I found little pockets where I could write posts, but still haven’t found my rhythm for continuing to make new work, write posts, and take care of my family.  This year is for attempting to figure some of that out.

I realized that I was sort of stuck with my creative projects.  There was one that had me stumped, and when that happens I tend to avoid working on things.  It sort of feels like a roadblock to getting anything done.  My roadblock was some vintage pants I was altering.  So, after gathering advice and thinking about the problem for a long time, I decided to take the easy way out so I could get them done and move on. 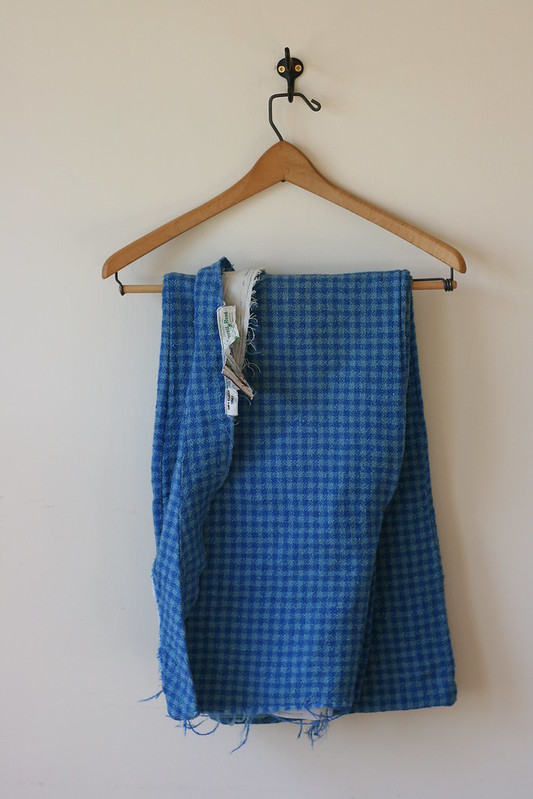 The pants in question

I got these pants pre-kids and, even then, they were snug.  In fact, they met their demise when I wore them one day, sat down, and split the butt seam.  (Luckily, I was on my way home, so I didn’t have to figure out a creative fix at work.)  Anyway, in the end, I decided to let out the seams, but that meant that my waistband was now too short.  I tried adding an extension to it, but it wasn’t quite long enough, and there were some other reassembly problems that I ran into.  That was when I decided that the most important thing was being able to wear them again.  So, I finished the top edge with single-fold bias tape that I already had, which also makes the waist less high and more comfortable for me. 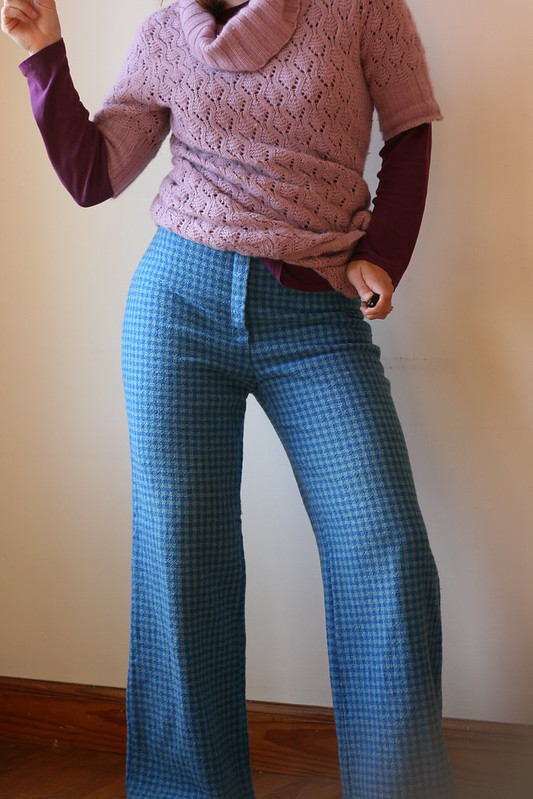 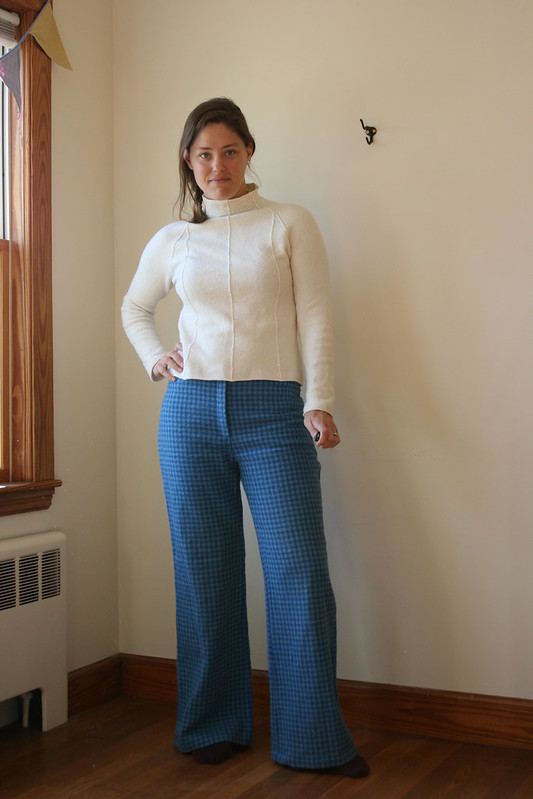 It’s so nice to have these wearable again, just in time for the colder side of fall and the coming of winter.  They were, I think, originally meant to be ski pants, so they are made of handwoven wool from Ireland, and are lined inside.  I won’t say they are the most slenderizing pants out there, but I love that blue on blue check, and that they are warm and cozy.  I also think fashion is more fun if it’s just a little bit weird.  🙂

I have a little bit of a long-sleeved shirt shortage, so I’m trying to alter some shirts I got last winter to fit better.  These two are going to be sewn together and then reverse appliqued a la Alabama Chanin. 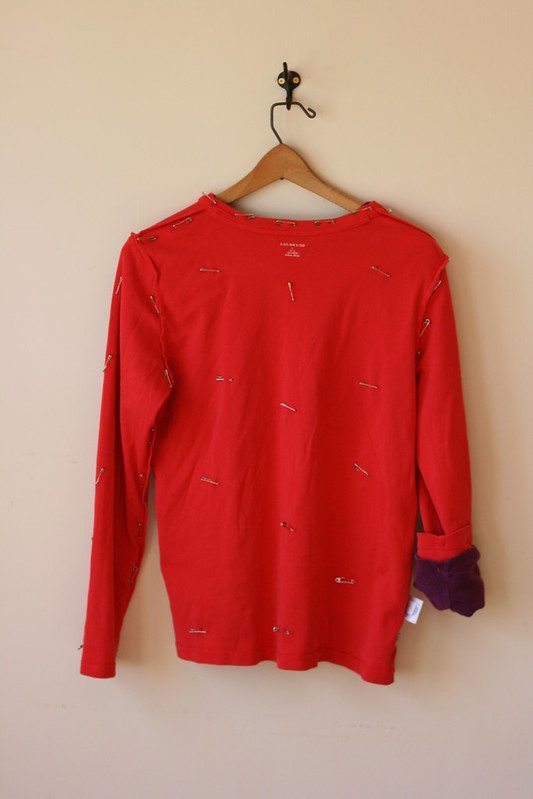 You can see the other shirt where I folded up one of the sleeves.  Both shirts came from Lands’ End.  They are basic t-shirts and are the same style.  Both are inside out and safety pinned to one another so they can be sewn together. 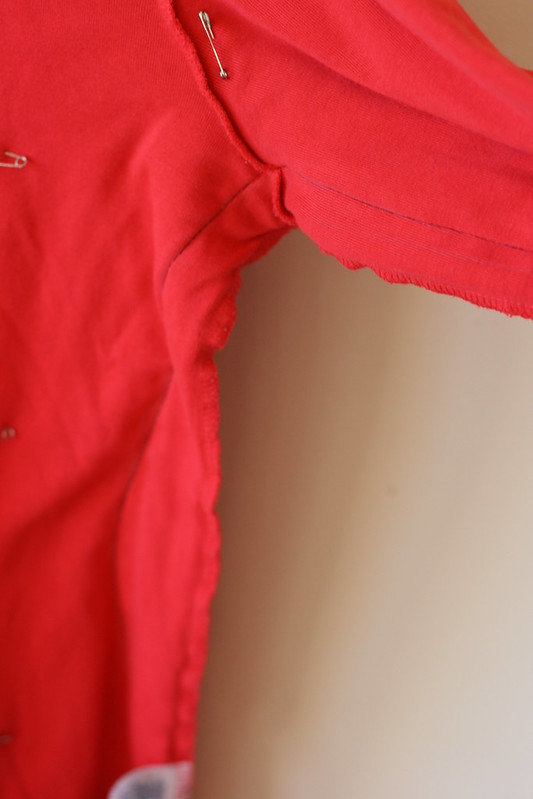 Here is a detail after sewing.  I used the t-shirt/bolero back pattern piece from Alabama Studio Sewing + Design by Natalie Chanin as my guide for the side seams.  I laid it over the pinned shirts and used chalk to trace around it.  Where the side seam touched the armhole, I tapered to the wrist opening (you can sort of see that above).  Once the two shirts were sewn together, I cut off the excess fabric.  Next, I’ll work on doing the reverse applique.  I’ve made a lot of the patterns from Alabama Studio Sewing + Design as basics in only one layer of fabric to test them out (although I have been using my machine, rather than hand-sewing them….I hope Natalie wouldn’t be disappointed 🙂  ).  I’ve really come to love and trust her patterns and working with knits, which I was always afraid to do before I discovered the Alabama Chanin books.

The other project I worked on was a muslin (test garment) for a shirt pattern I’m developing.  I mentioned before that I had gone through Design-It-Yourself Clothes by Cal Patch.  While I’m starting to get the basic ideas, I still need a lot of practice.  I’ve made a button down shirt pattern before, but wanted to make another pattern and then make some variations from there.  This is the test garment for the initial pattern.  Here it is so far: 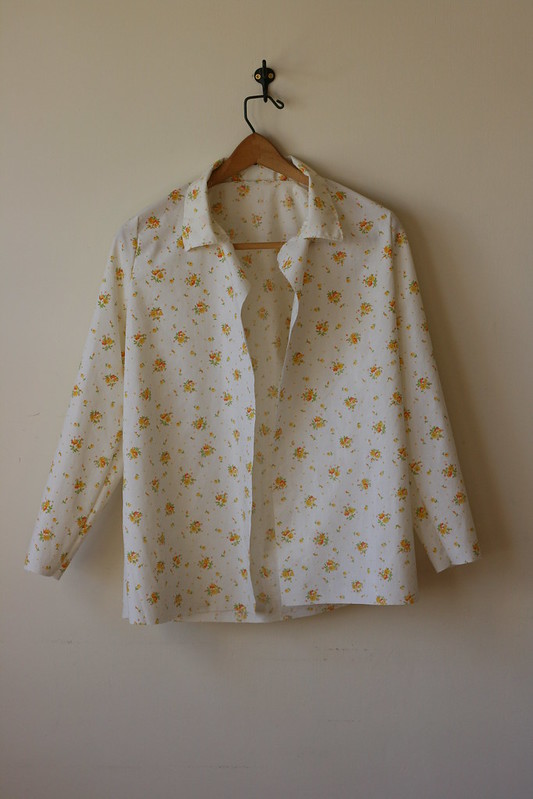 I found a cute sheet to use as my muslin fabric at the thrift store, so I’m hoping that even if this isn’t perfect, it will still be wearable and I’ll get two shirts out of the process.  Once I put the cuffs on, I think I can try it out.  I’m not great at fitting and transferring my corrections to my pattern, but I’ve been reading up on it, so I need to give it another try.  I loved the first shirt that I made, but it wasn’t fitted as well as it could have been.  It’s all progress, right?

Hopefully I’ll make some good headway on these projects sooner rather than later so I can share them with you as they get finished.  I’m looking forward to showing you how they turn out!