One of my current sewing goals is to learn to make button-down shirts.  I’ve tried drafting one before, courtesy of the instructions in Cal Patch’s pattern drafting book, but I wanted to learn how to sew one from a commercial pattern and, hopefully, fit it.

My first long-sleeved attempt is Simplicity 1538, View A, minus the studs they recommend on the front yoke.  I made a size 16 in the bust and graded out to an 18 for the waist and hips. 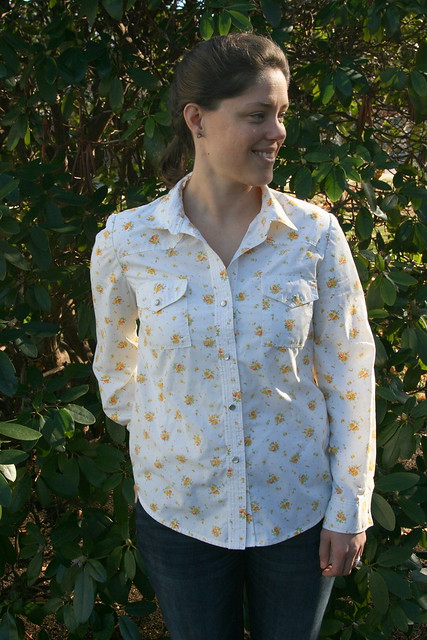 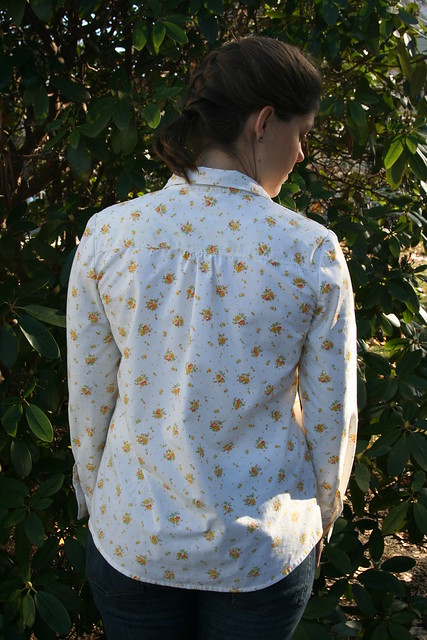 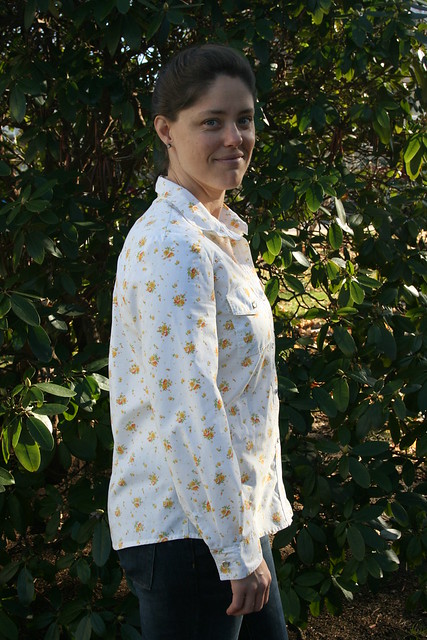 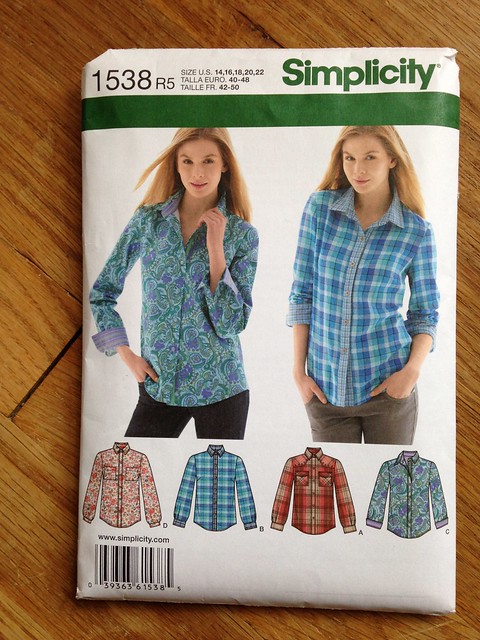 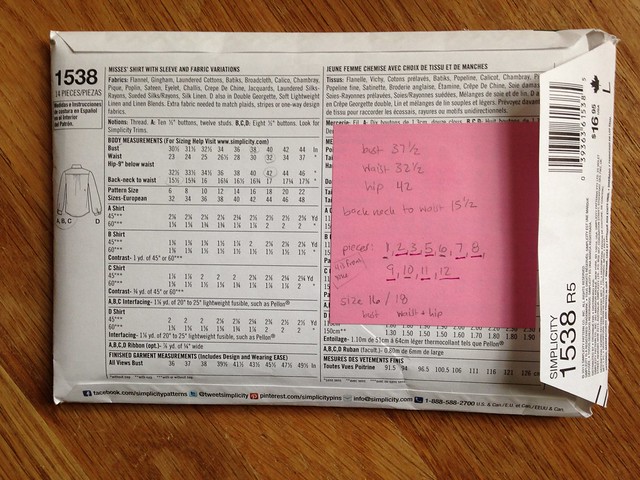 Because this is my first attempt at this pattern, I found a bed sheet in my stash that I liked, and used that for fabric.  It seemed like the best way to go before trying out more costly fabric.  Interfacing came from my stash, but I think the time is soon approaching when I’ll actually have to go out and buy more of that!  The buttons (and they are buttons, rather than snaps) were a drama all their own.

These are the same buttons that I used in my orange shirt, and I had one left.  I really loved how it looked on this shirt, so I went to Joann’s to get more.

And they had one package of three buttons.

So, several days later, I drove down to another Joann’s and looked through all their buttons.  I didn’t see a single package.  I was nearly ready to leave with my other supplies, when I decided that, since I had come all the way down here, I should just ask.  And I got the lady who stocks the buttons!  She explained how the buttons were organized and helped me find what I needed.  They actually had four packages that I had managed to overlook.  I know!  Sad on my part.  I only needed two packages…but I bought all four since they were on sale (and I was worried something would happen and I would need/want more).  So that’s my story.  😉

Now back to the pattern!  The fit is great, except…the shoulders are too narrow for me.  You can see the strain at the edges of the yoke and in the shoulders in the front.  The next time I make this, I’ll try out a broad back adjustment.  I’m tempted to do it on this pattern and try turning it into a popover shirt, which would mean cutting the front piece on the fold, rather than as two pieces, and inserting a partial placket down the front.  I know they are kind of sewing-blog-trendy at the moment (check out Dixie’s and Sallie’s), and I pretty much got sucked in.  Now I want one, and I keep envisioning some of my fabric in popover form.  It doesn’t hurt that Indiesew just posted a tutorial on putting in a partial placket.  Maybe it’s destiny.  😉 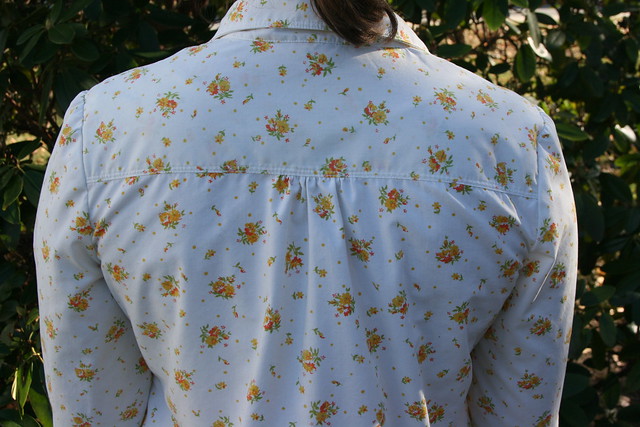 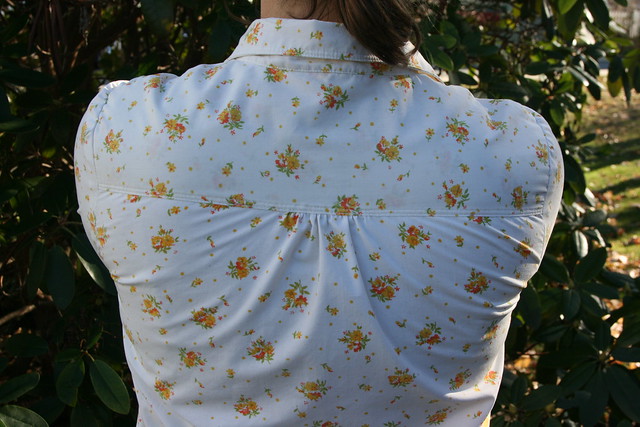 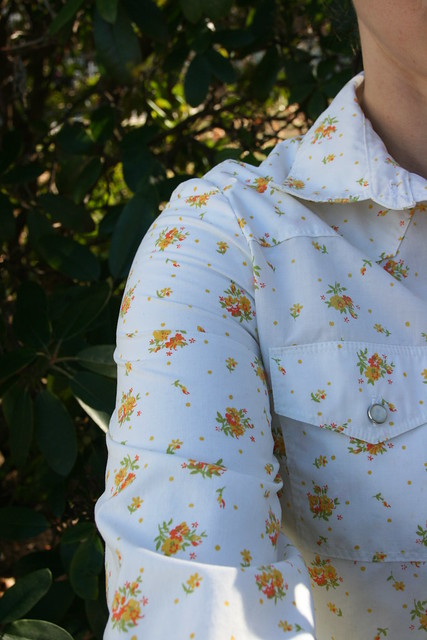 Despite the shoulder width problem this is a very wearable shirt.  I really like it, and it fits my style.

The one change I might make to the directions is on step 47 (yes, there are A LOT of steps–I will never take a button-down shirt for granted AGAIN!).  It tells you to press under 5/8″ on the neck band facing, but I think next time I’d try just pressing under 1/2″.  When sewing from the outside, I didn’t catch hardly any of the facing in my top-stitching , and I had to go back and sew the facing down by hand.

Despite that, making this shirt was fun and I’d do it again.  It was a billion steps, but skill-wise, it was at my level, and I’m proud of my work.  The inside looks great with a few French seams and a few bound seams (similar to the orange shirt, but just a little better), and I think the topstitching turned out well, too.  Also, the way they have you do the yoke is pretty darn cool. 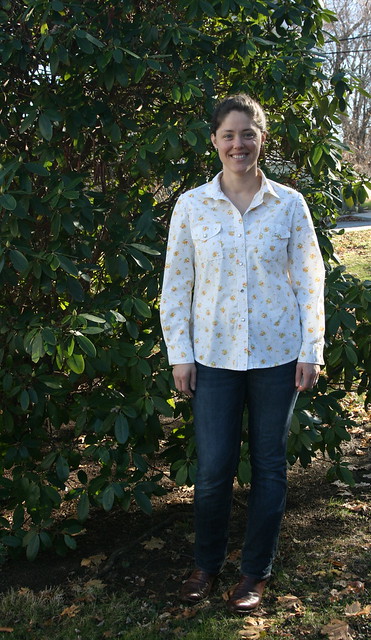 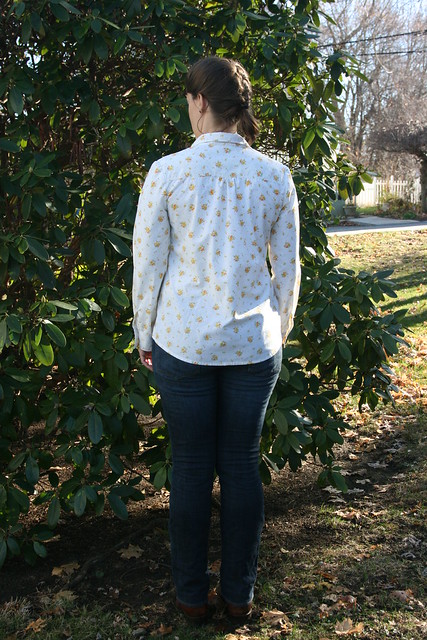 I’ve traced out a pattern for a princess seam button-down (I blame Lladybird/Lauren–she makes me want to copy her ALL THE TIME.), and I’ve been looking into the popover option.  These plans may get sidetracked by Christmas and *gasp* sewing for others, but we’ll see if that really happens.

In case you want a look at what is tempting me to sew for someone beside myself, you can check out Thread Theory’s Jutland Pants and their Strathcona Henley.  Maybe I’ll actually sew something for my husband!

The other big temptation is the new sewing patterns for girls that Megan Nielsen just released.  I was a pattern tester for the Mini Tania Culottes.  Check out what I and others made in this post on Megan’s blog.  She also released patterns for Mini Virginia Leggings and, my favorite, the Mini Briar Sweater and Tee.  I think that Mini Briar pattern is calling to me, especially since Megan gave her testers all three patterns as a thank you.  I love a new pattern!

© Lisa Poblenz and Pattern and Branch, 2019. Unauthorized use and/or duplication of this material without express and written permission from this site’s author and/or owner is strictly prohibited. Excerpts and links may be used, provided that full and clear credit is given to Lisa Poblenz and Pattern and Branch with appropriate and specific direction to the original content. Please do not reblog this content without permission.