Hi, friends!  Today will be a little different, since I have a knitting project to share!  Like many sewing people, I also like to knit, although after a few sweater disasters (for the most disastrous, click here), I’ve slowed down considerably.  Before I really came to sewing, knitting was my passion, but for the past three years, I haven’t done much of anything in that arena.  I’ve been missing it, though, so the search has been on for a pattern that is fast and easy enough to do while watching TV or chatting with other people, but also interesting.  And I think I found it:  the Chunky Cable Knit Hat, a free pattern by Lula Louise. 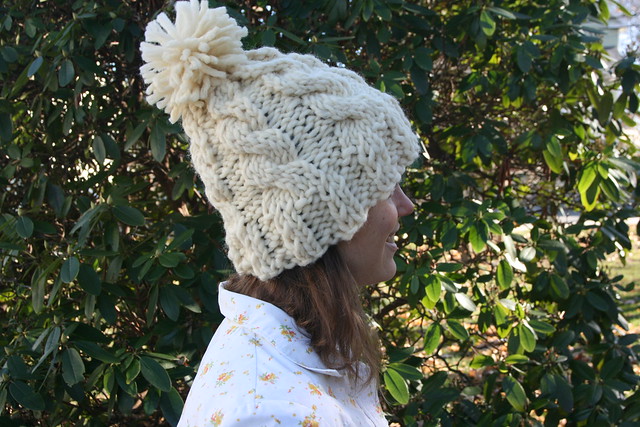 I can’t remember exactly how I found this–it may have been through Google or Pinterest, but it was just right.  I still have some great chunky yarn left from this awesome yarn sale in Vermont, and I wanted a fun, super bulky, chunky hat. 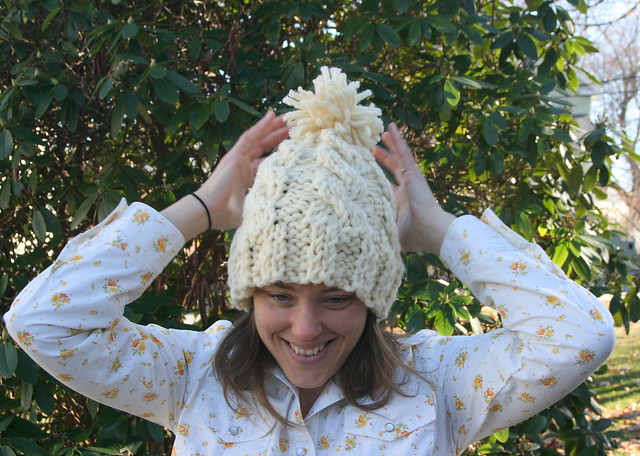 I’m so thankful to my husband for taking these pictures.  (Thanks, Babe!)  We had just taken the pictures for my button-down shirt, when I realized we could get these done, too.  This explains the awesome hairstyle I’ve got going on, but then, once we had taken all our pictures and were ready to run back inside (it was getting cold, and we were hungry), we realized one of our daughters had photo-bombed all of our pictures, and we had to shoot them again.  That really endeared my husband to blog photography.  Now it is his favorite thing!  OK, no.  That’s a lie. 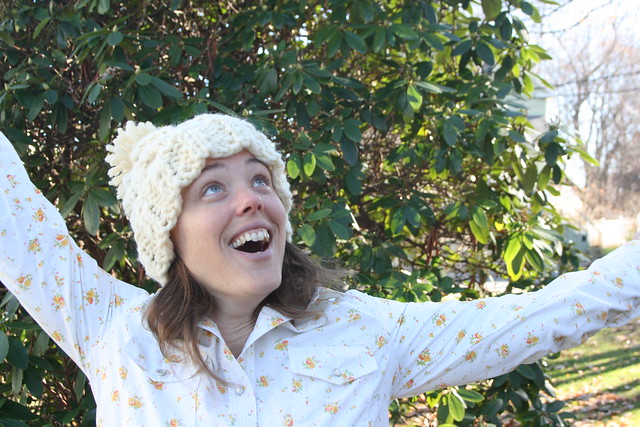 This picture shall be titled I love taking blog pictures!

Now we’re just getting silly.  Let’s get back to the pattern at hand. 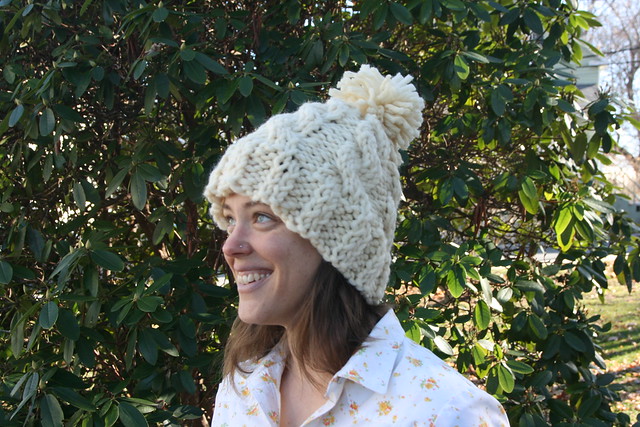 We should talk details.  Because I tend to knit all things that are elephant-sized, I made the small.  This was a good choice for me.  I used size 13 needles, and my chunky wool yarn from the Yates Farm Yarn sale (you can see a post from another blog on this sale here).  I have minor cabling skills, and these were just right for me, especially as my knitting skills are pretty rusty. 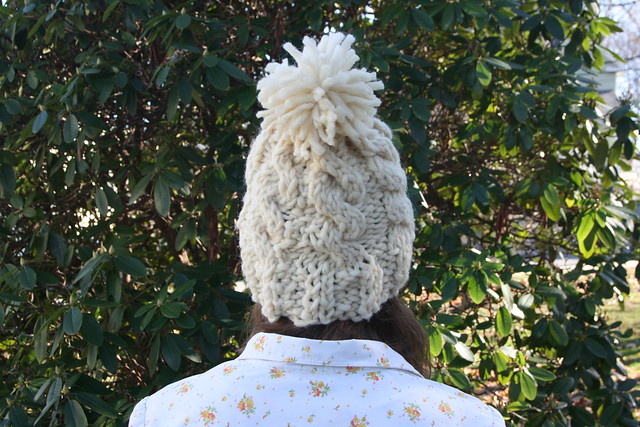 The pattern is knit flat and then you sew it up at the end.  You may be able to see my seam in the back in the picture above.  This probably took me two shorter nights of knitting. 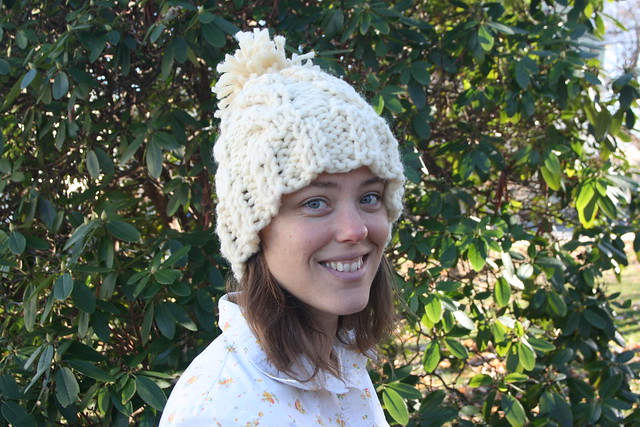 After I was done I also remembered one reason I stopped knitting so much.  I’ve gotten into the bad habit of knitting with my shoulders hunched, so I had a huge tension headache the next day.  Time to redevelop good habits! 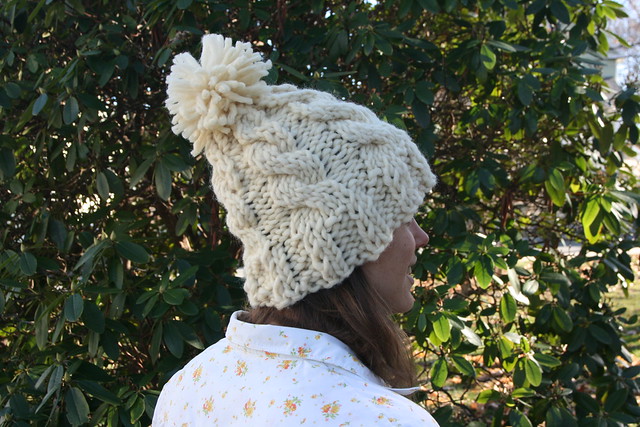 The pom-pom on top was really fun to make.  Now I’m on a bit of a pom-pom kick.  I made this one removable by tying it onto the hat with some string in case I ever need to clean the hat and want to protect the pom-pom. 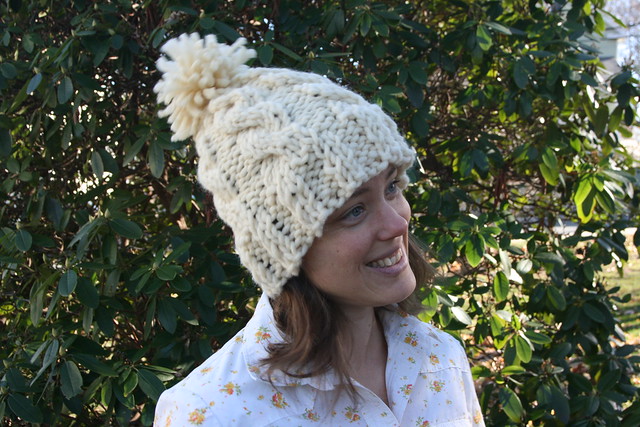 The only issue I had with the pattern was what I think is a typo in the small size directions on Row 9.  I think that after “p2tog*,” it should say “repeat to end”  rather than just “p2tog*, end”.  As far as fit, I do have to push it onto my head just a little bit.  I don’t know if this is because of the pattern or my knitting, but the ribbed section is a little looser than I would like, so maybe I will run a few rows of elastic thread through it at some point.  Once I push/pull it on, though, it’s nice and cozy. 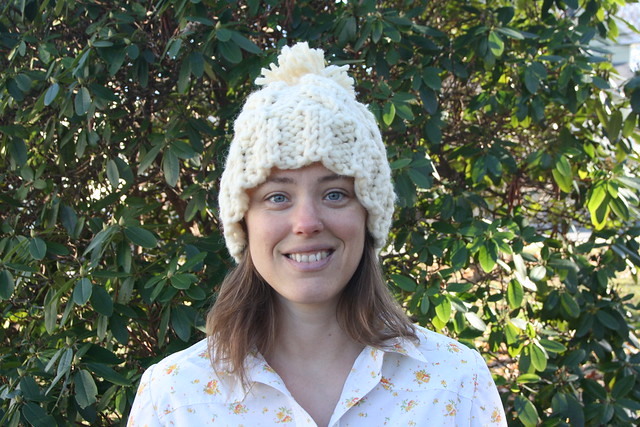 So, my final analysis is that I like the hat a lot and would knit it again.  This is a really fun free pattern because it knits up quickly and would be an easy first cabling project.