Hey…I bet you guys are going to be super surprised…I made Simplicity 1538!  Again! 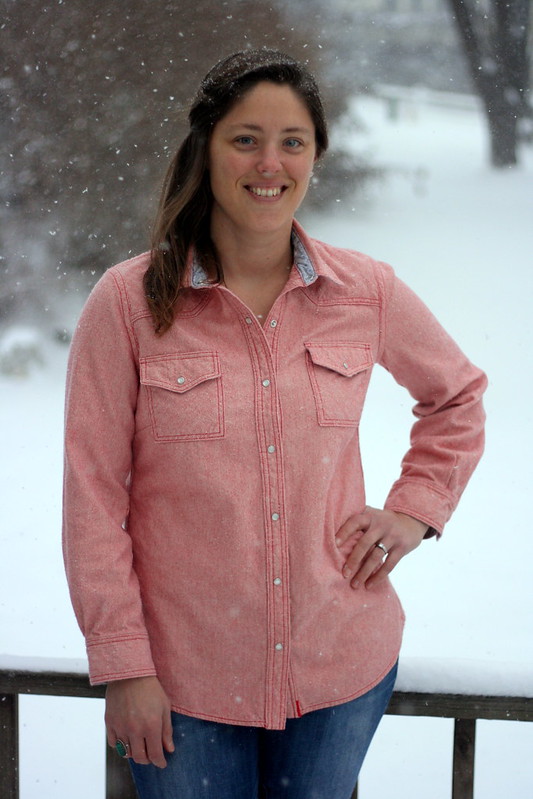 It’s good to know I finally have a TNT (Tried ‘N True) pattern.

This version is made from Robert Kaufman Shetland Flannel in the Peach colorway with pearl snaps from Pintuck & Purl.  Thread, pattern, and interfacing came from Jo-Ann Fabric.

This shirt has the same added length (two inches) that my last one had, but for this version, I also used the pockets and front yoke in View A.  I swapped out my favorite buttons that look like pearl snaps for actual pearl snaps, something I’d never worked with before. 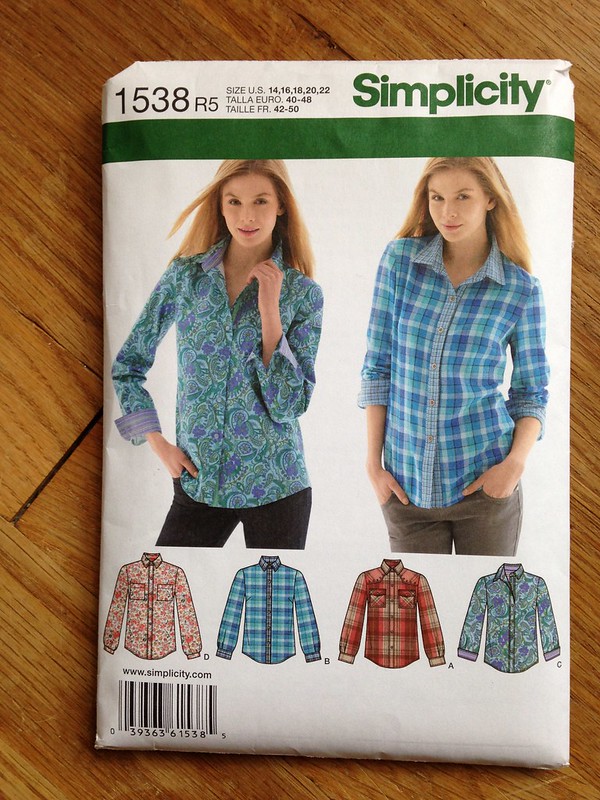 Here are my notes.  This fabric has a very subtle right and wrong side.  It’s actually made up of red and ivory threads, and one side is a little lighter while the other side is a little redder.  I chose the lighter side as my right side.  Either would look great as long as you are consistent (or intentionally inconsistent, I suppose).  It also feels like a lighter weight flannel than the Mammoth Plaid I used for the last shirt, although it’s the same weight according to the Robert Kaufman website.  It also feels a little bit softer to me.  I did prewash and dry my fabric, but it may not be a bad idea to throw this one in twice, just to be safe.  When I finished the shirt, I noticed that the front near the bust is very slightly tighter than I would like.  You can see it in the picture at the top of the post.  It could also have been the addition of the front pockets and yokes or maybe, as Maggie at Pintuck & Purl pointed out, the difference between using pearl snaps and buttons.  Who knows?  It’s not something that will keep me from wearing the shirt, but it’s definitely interesting. 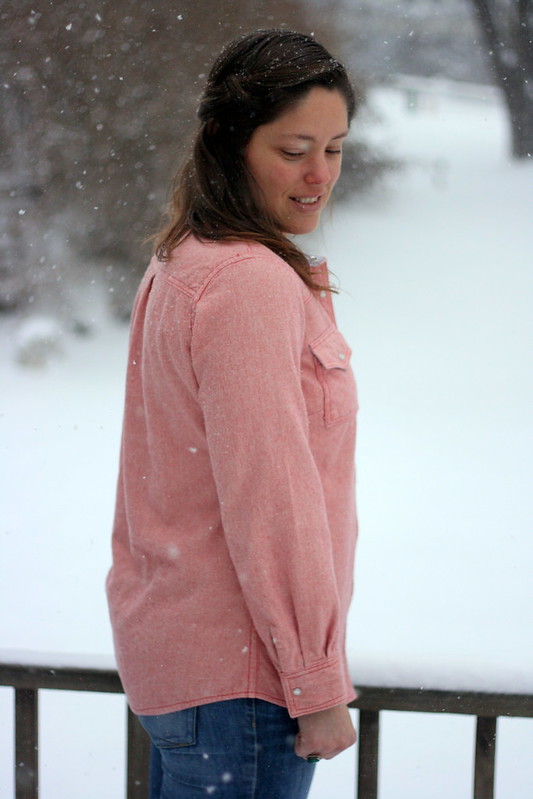 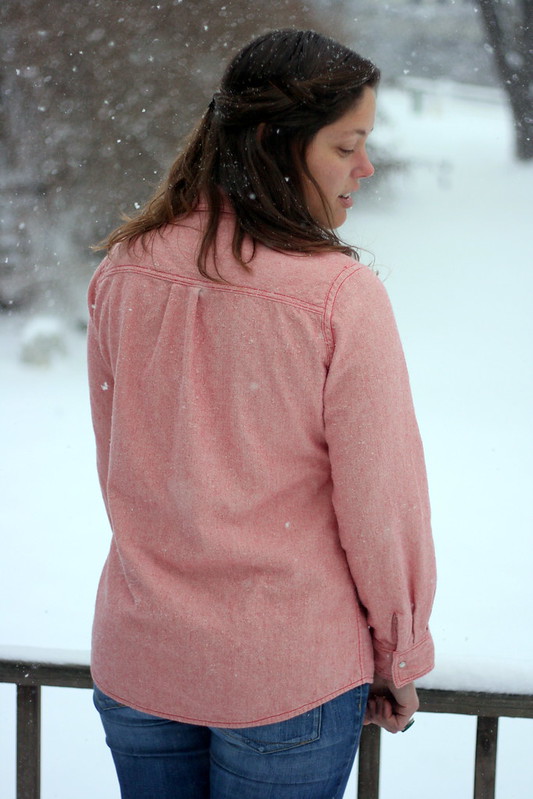 During construction, I used flat-felled seams for my arm and side seams.  They definitely aren’t perfect, but I think topstitching and seams like these are just some of those things that take practice.  Overall I tried not to get too picky and only ended up redoing my topstitching in one or two places. 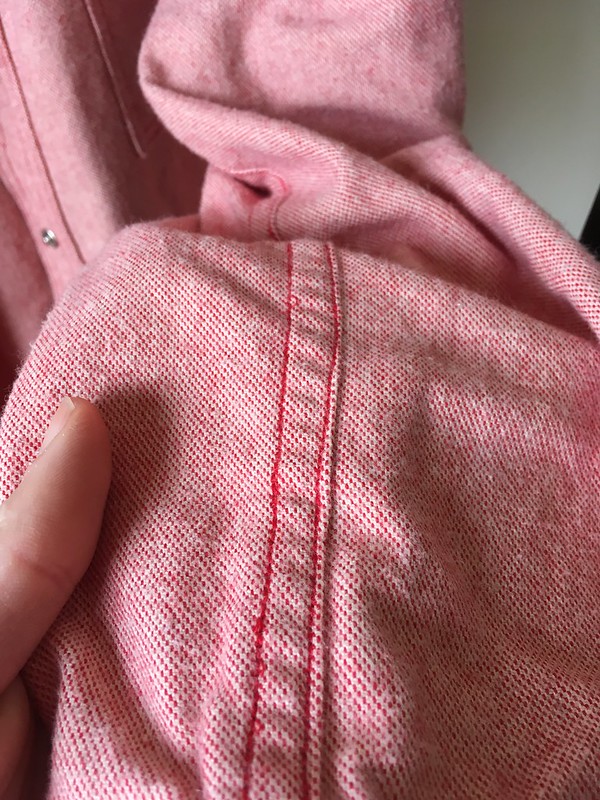 I also tried out the triple stitch on my machine.  I know Lauren of Lladybird has talked about loving that more than using topstitching thread, so I thought I would give it a try.  It really does create a beautiful stitch. 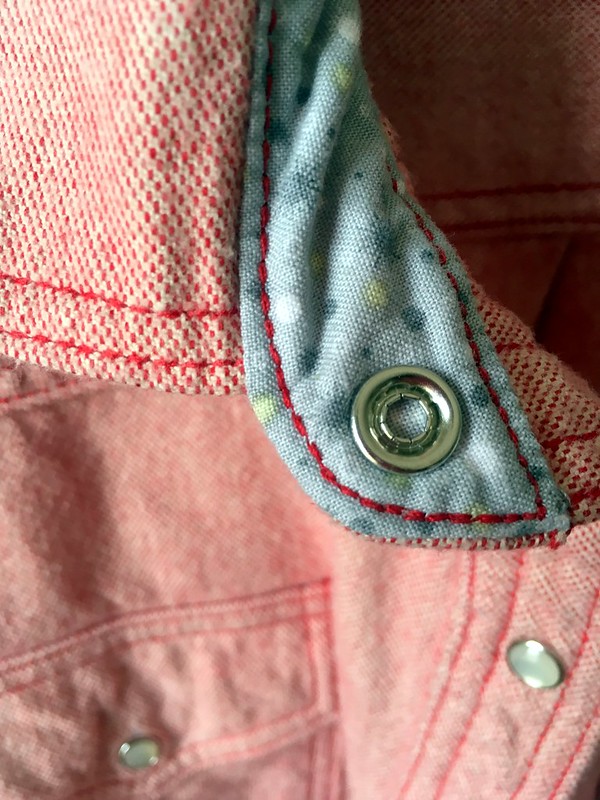 For another interesting detail, I used a coordinating quilting cotton for my cuff and collar stand facings as well as for the undercollar.  I wish I had more of these quilting cotton prints.  I won a few in a giveaway around the time I started to sew, and they coordinate with so many things.  Unfortunately, I don’t even know the company, designer, or line they are from.  Do any of you? 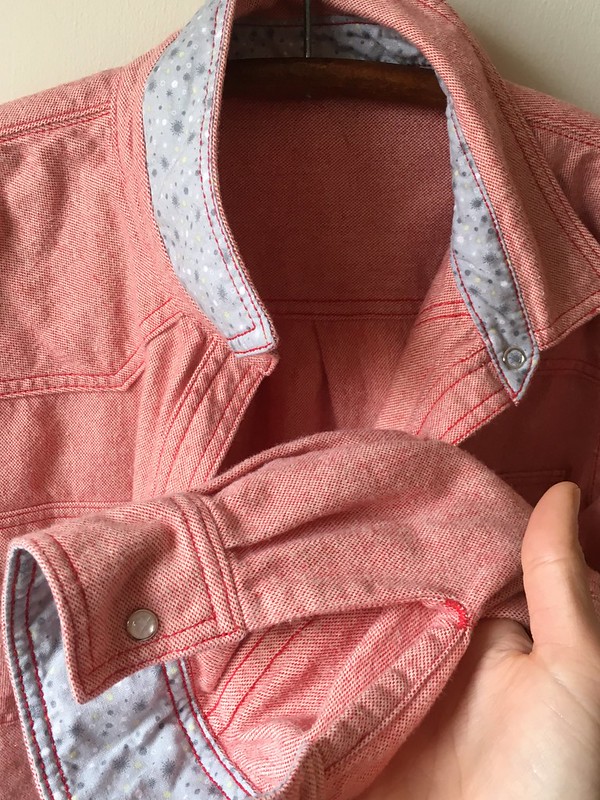 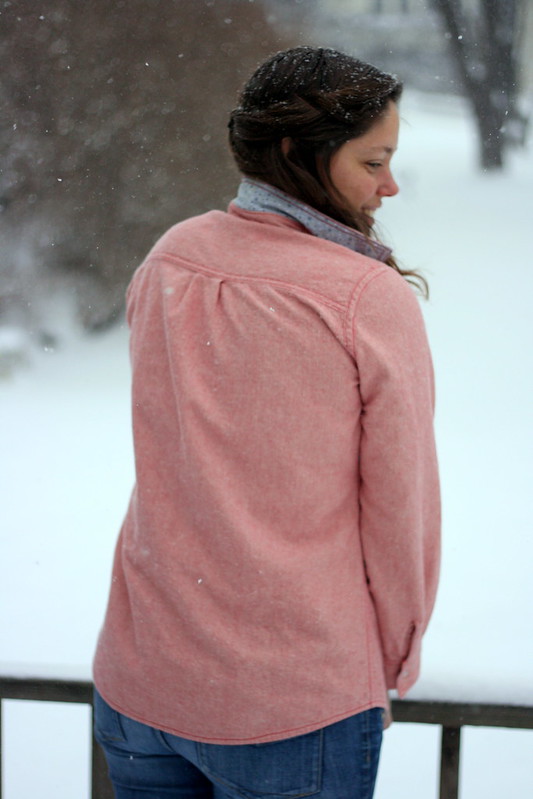 By the time I took this picture, the snow was getting to be a little much, but it gives you the idea.  Below is a clearer picture. 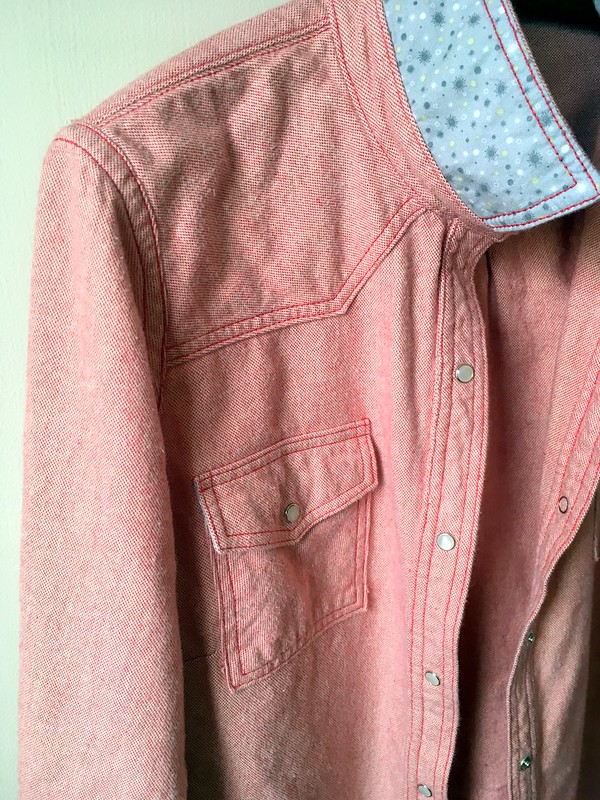 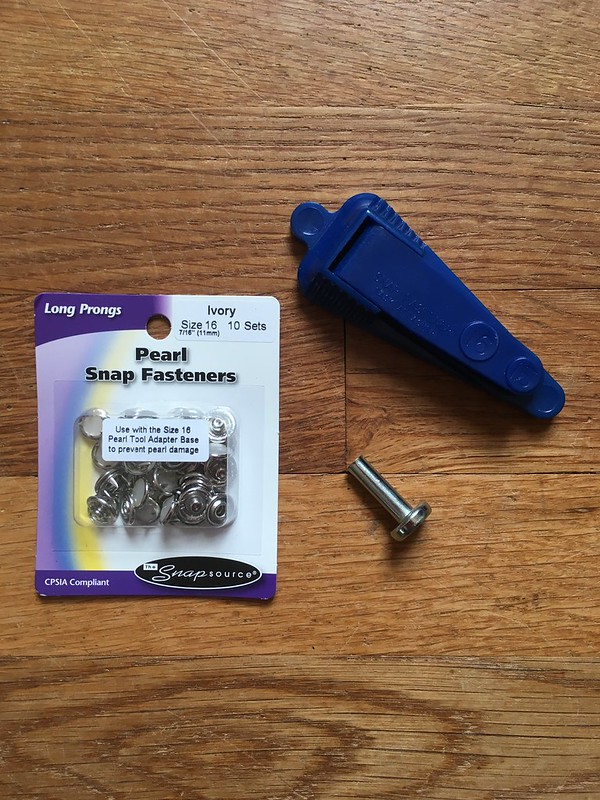 I used size 16 ivory snaps for this project.  I was given the gift of my husband’s grandmother’s sewing things when she passed away, and I found two different kinds of snap setters among the bounty.  One is this blue plastic setter.  I looked around on youTube for a tutorial on how to use it (which was harder to find than I expected), and I gave that a try on some scrap fabric.  I also tried out this metal setter using directions on the back of some vintage snaps.  That was the tool I liked the best, and the instructions were excellent.  I got all of my snaps in without too much trouble with the exception of my first one, which cracked due to insufficient padding underneath it.  Lesson learned on that one! 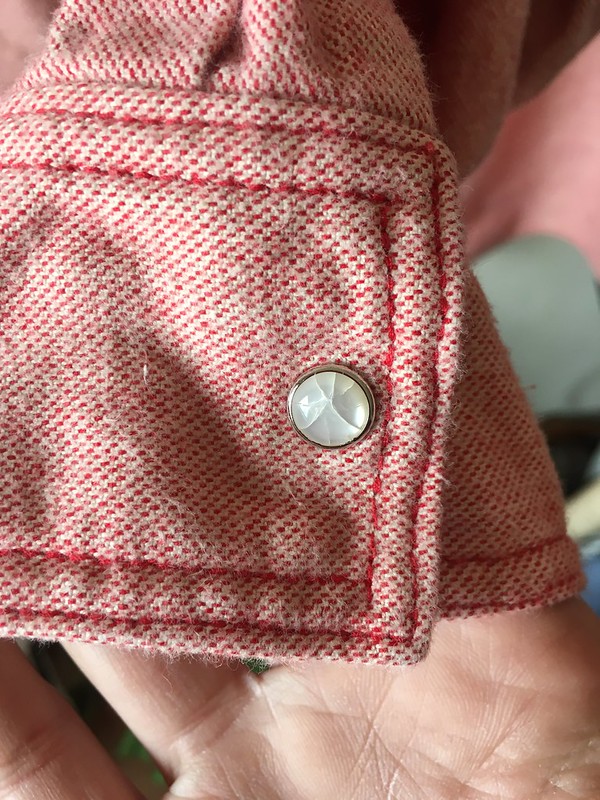 So here’s my shirtmaking question for you.  When you are putting in your cuffs or collar, if you are instructed to pin the facing down from the outside and then topstitch from the right side, catching the outside and the facing in the topstitching, are you successful?  If you are, how do you do it?  I’ve given up and now I just hand-stitch those facings down and then topstitch on the outside because I could never catch the whole facing.  Thanks for any help you can give on that!

That’s it for this shirt!  I have some more Robert Kaufman flannel that I was going to use to make one more, but I’m trying to force myself branch out.  We’ll see what happens!  My latest thought is maybe Simplicity 8014.