Since the scope of this blog is sewing and creative projects, I’ll just say this before beginning:  we’re well here.  I often suffer from anxiety, but by God’s grace, I have been largely calm and peaceful.  I’m thankful for many things, not the least of which is good creative work to do in uncertain times.  Creative work may seem frivolous and secondary to some, but it can be both a necessary and a wonderful gift.  So let’s talk knitting today.

I don’t always put my knitting projects on the blog, since I keep this space largely for sewing, but this project represents a lot of problem solving and (good) hard work, and I want to share it. 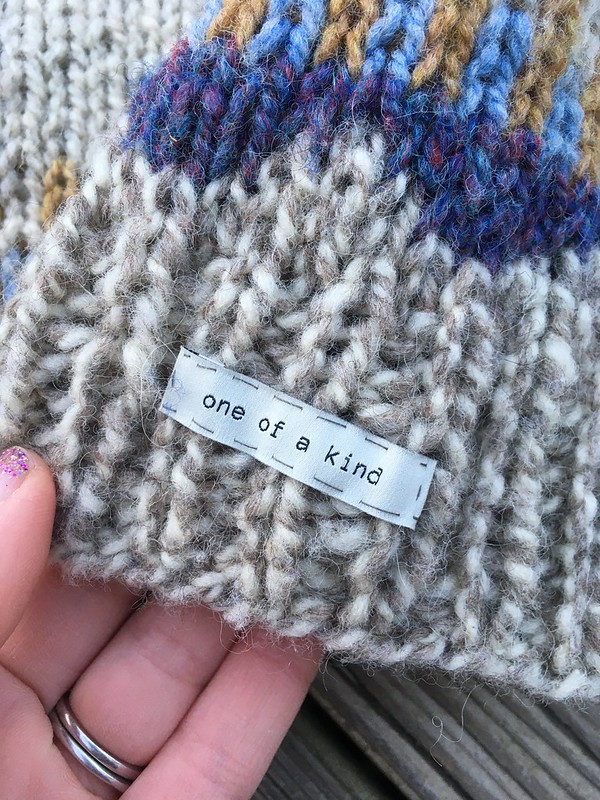 So, here was my problem:  I have many partial and complete skeins of 14- or 15-year-old wool yarn from Yates Farm in Vermont in a worsted weight that knits up like a bulky.  I love this yarn, but I have lots of colors and not many skeins that are the same color.  It’s also a slightly scratchy yarn and isn’t great at the neck or ankles although it’s lovely to wear over another shirt.  I’ve been pondering just what to do with it for years.  Maybe the best way to use it was a colorwork sweater, but it had to be something without a high neck that could use a lot of partial skeins and a lot of different colors.  Hm…  What could I make? 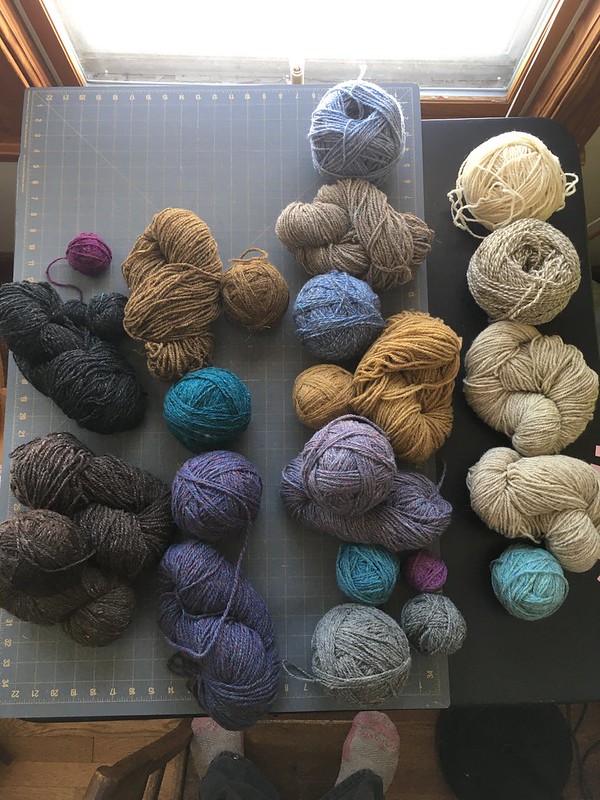 I had fallen in love with the Strange Brew book by Tin Can Knits and had it in my library. 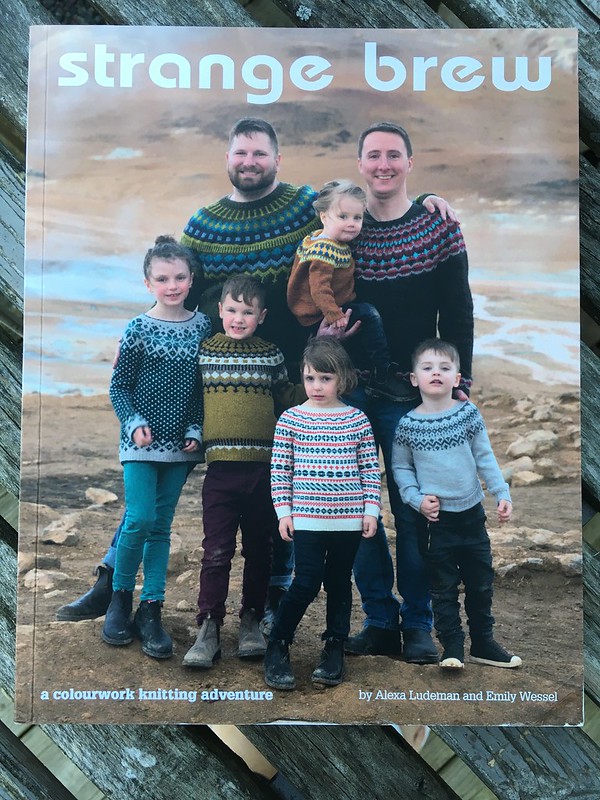 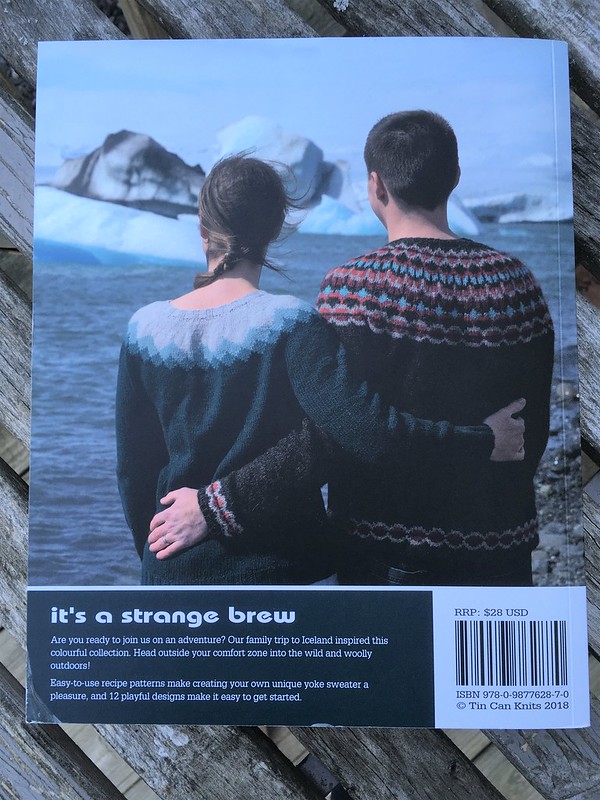 This book is filled with patterns for colorwork yoke sweaters as well as hats and cowls.  Not only does it contain patterns–it tells you how you can design your own sweater or change up the existing patterns.  It’s my favorite kind of craft book:  projects, inspiration, and reference information.  A lot of the design aspects of the book are still a bit beyond me, but after ages of mulling things over, I thought I might take my favorite design, the Marshland Sweater, and modify the colorwork a bit to have some of my favorite elements in it. 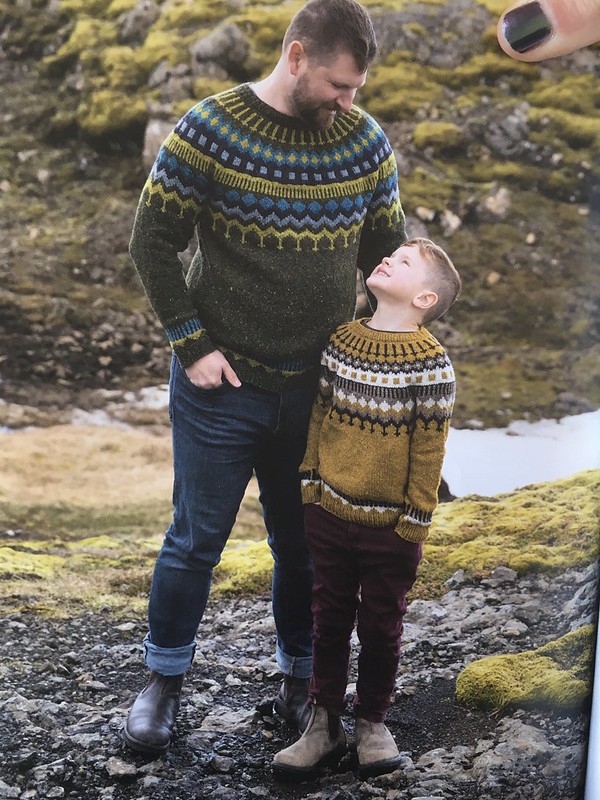 I studied what I liked best in the existing pattern and in other colorwork designs and changed up the color charts a bit.  Since I don’t have experience designing knitwear, several of my rounds had three colors in them instead of the usual one or two, but I managed ok.

To throw yet another complication in, I needed to be able to knit this sweater at a different gauge since my yarn was knitting up thicker than a standard worsted.  In order to figure out gauge, I took the advice in the book and made a hat.  I wasn’t worried about it fitting anyone–if it did, it would be a bonus.  Instead, I used it as an opportunity to try out some colorwork patterns I had been doodling in a notebook and to see if I could make a fabric that I liked…and what would happen to that fabric if I washed it in the washer and air dried it.  In the end, the hat was not really wearable, but it WAS informative. 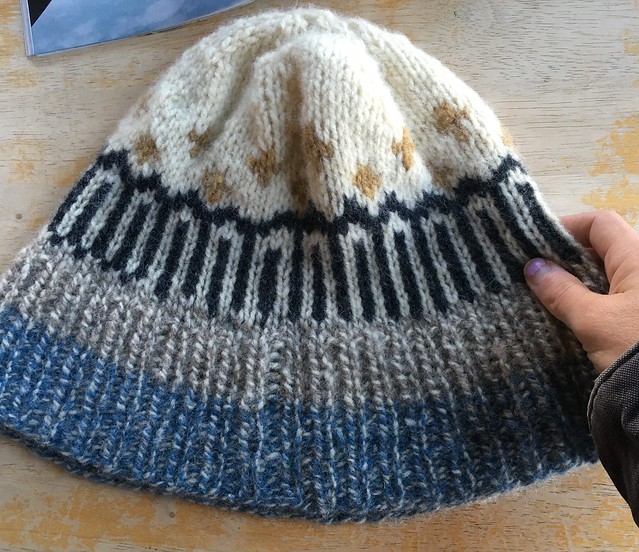 From there, I measured my stitches per inch and used the formula on the Tin Can Knits website to figure out how that gauge could be used to knit the Marshland Sweater.  I wanted a big, warm, comfortable winter sweater with plenty of ease and length.

Here’s what I ended up doing:

Then, I got knitting!  I had one pretty massive mishap where I overlooked a key instruction and knit beyond where the armholes were supposed to be.  I knew I would have to rip back quite a bit.  And then I realized that I had made another huge mistake–way back an inch from the beginning, I had messed up during the increase rounds, and I would have to rip back almost to the beginning.

The thought of just dropping a match on the thing leapt through my mind.

Instead, I put the sweater down and quit for the night.  The next day, when my family was at work and school and I wasn’t so tired, I ripped all the way back to the point where I had made my first mistake.

I had a goal of knitting at least one round a day, and that really made this sweater move.  I cast on on December 30, 2019 and, even with my huge mistakes, finished binding off on February 26, 2020.  I couldn’t believe it.  I’m not a very quick knitter, so this was lightning speed for me. 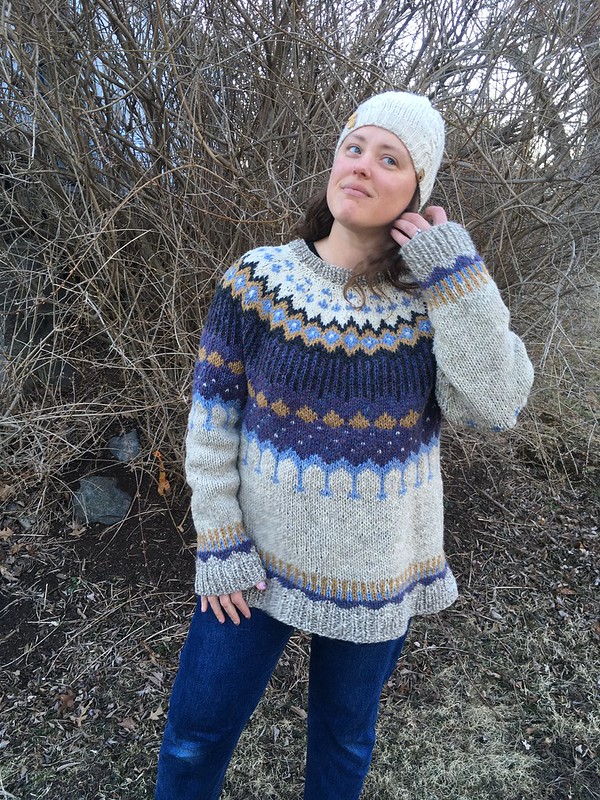 After that, I just had to block it (which I did in the washing machine using this tutorial) and weave in my millions of ends.  It was finished a few days later!  And I love it!!!!! 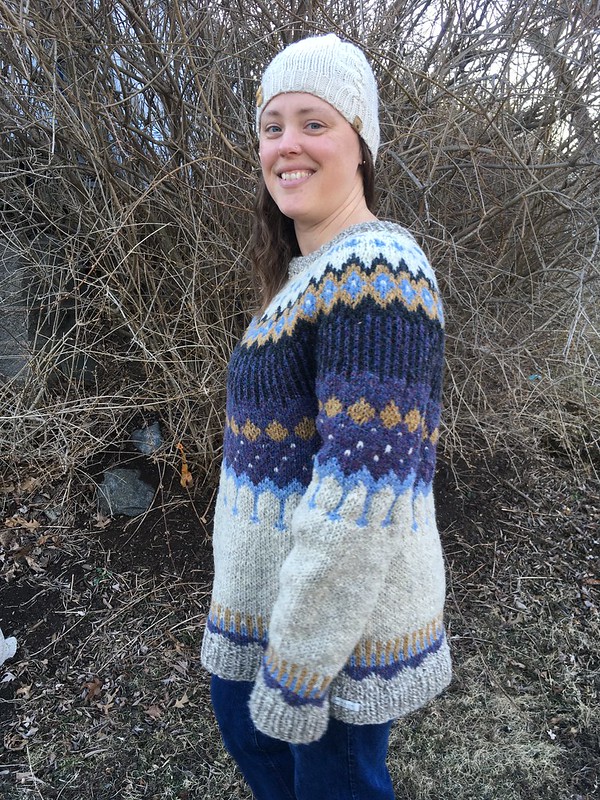 I left the sleeves long to increase the coziness factor and did the same for the overall length of the body.  I’m SO HAPPY with how all the colors look together and how it fits.  It’s big and warm (but not too warm) and perfect.  Theoretically, even if I wash it in the washer and air dry it in the future, there will still be plenty of ease.  I haven’t had the guts to try that, so hopefully I’m right. 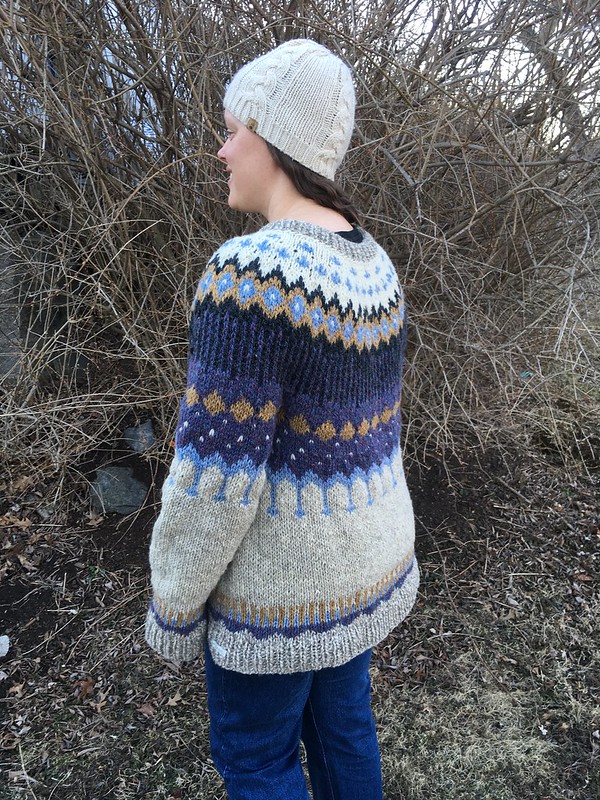 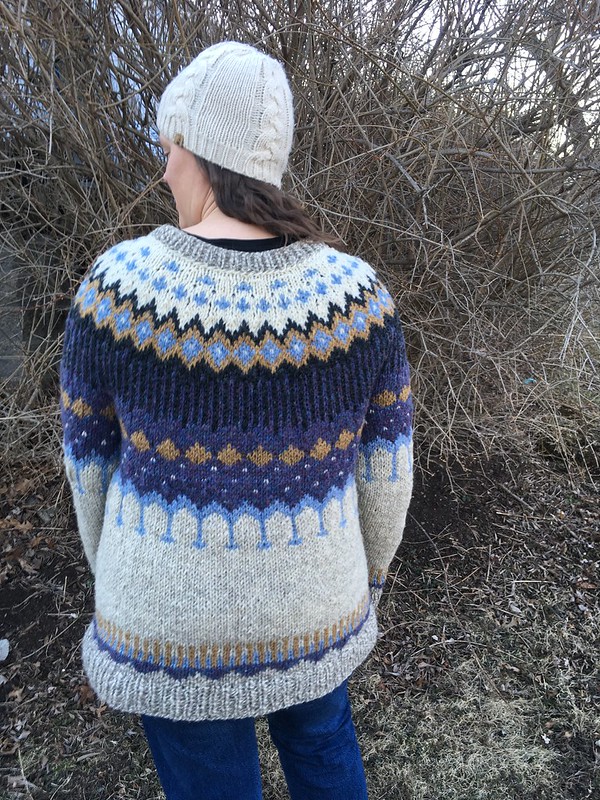 I have had this yarn for so long and have been at a loss for just what to do with it for so many years.  I still have quite a bit, but now I have a good idea of how to use it.  As spring seems to be on its way, and I want to get some wear out of this sweater, I have worn it multiple times per week each week since making it.  Between wearing this and my newly completed cardigan, I have had a lot of wardrobe repeats, but I am so happy with both of them that it’s a joy. 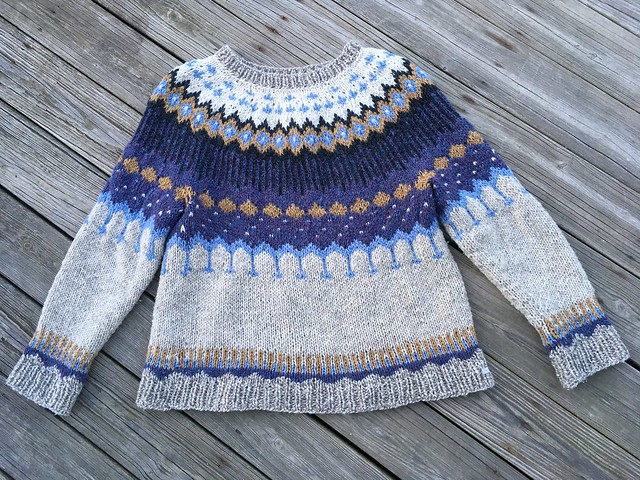 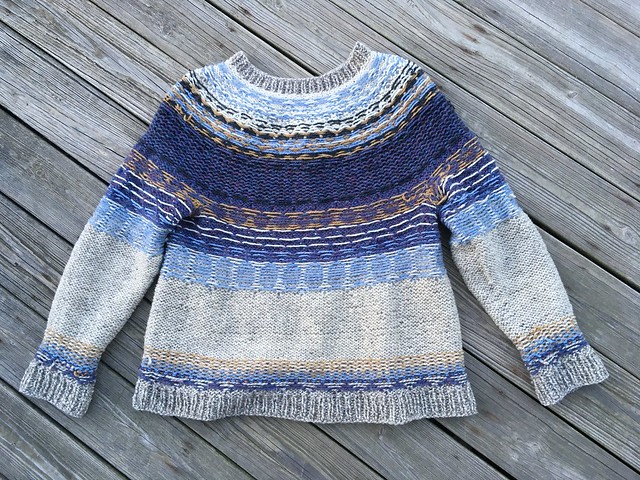 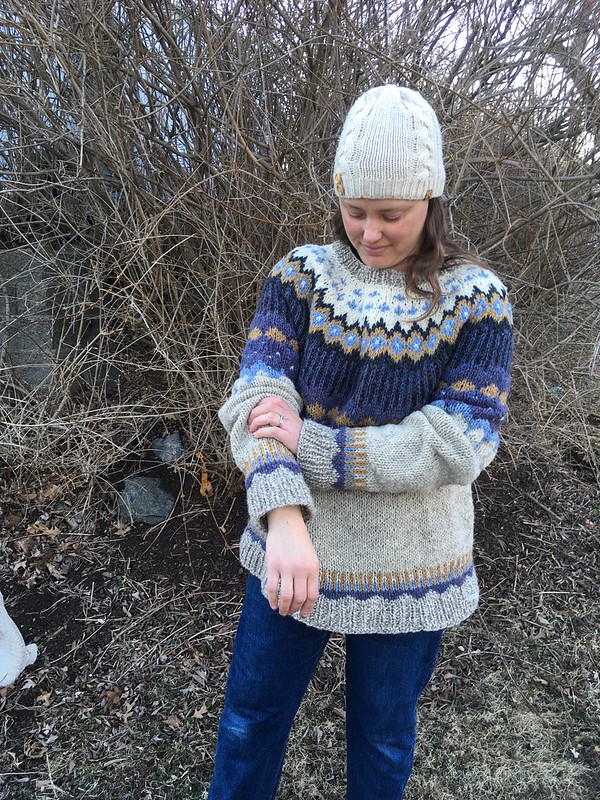