It’s time for another garment from my 2017 Summer Sewing list!  McCall’s 6848, View C is a top I’ve made before (in pre-blogging days, maybe?)…and one that I love!  I really wanted to make this simple top out of a flowy fabric to wear to work and church as well as with casual bottoms.  When I saw that Fabric Mart had black silk crepe de chine on sale, I knew that I had found my ideal fabric. 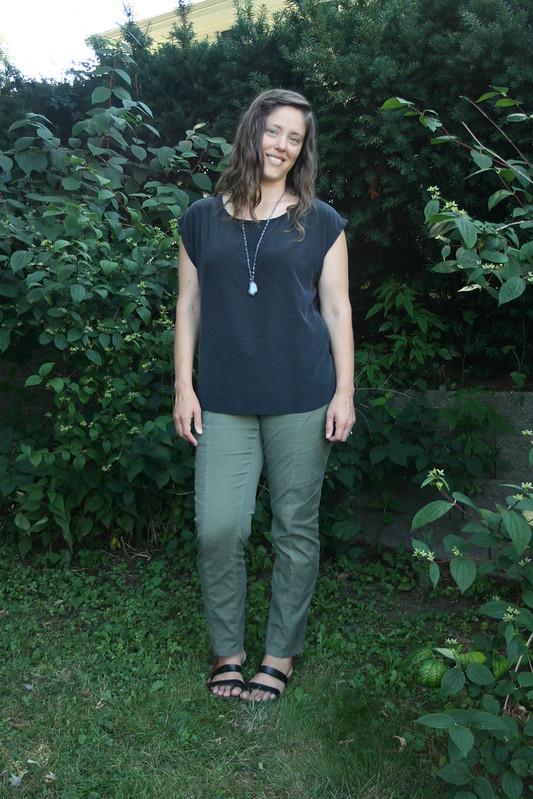 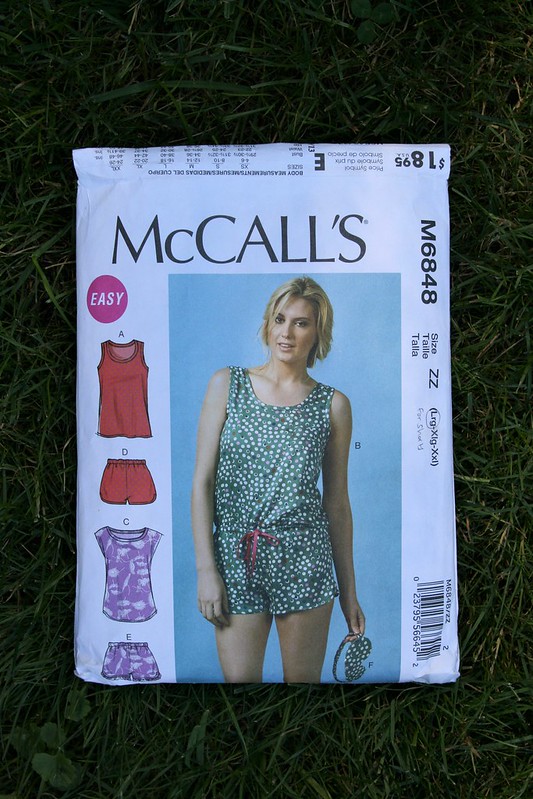 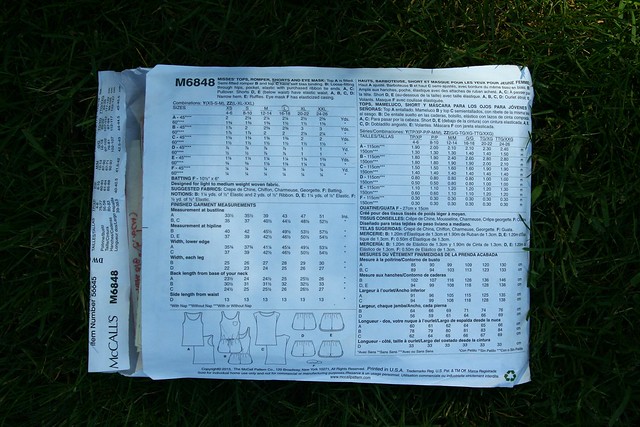 Now I know that silk is often viewed as a fabric that needs a lot of special care, but that is really up to you.  If you want to dry clean your silk, you can, but you can also throw it in the washer and even the dryer if you want to.  It does change the look of the fabric a bit if you wash it, but it doesn’t damage the fabric in any way.  So, while I actually prefer the look of the prewashed silk, I knew that I wouldn’t dry clean it due to cost and inconvenience, so I prewashed and dried. 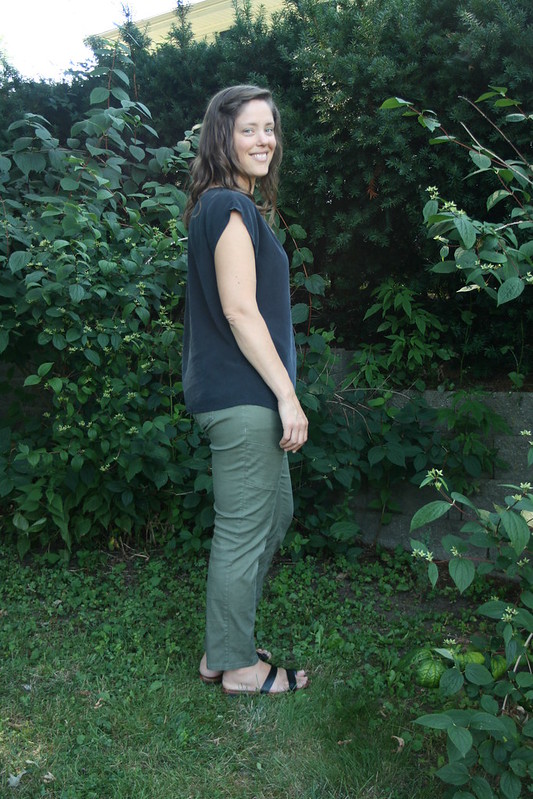 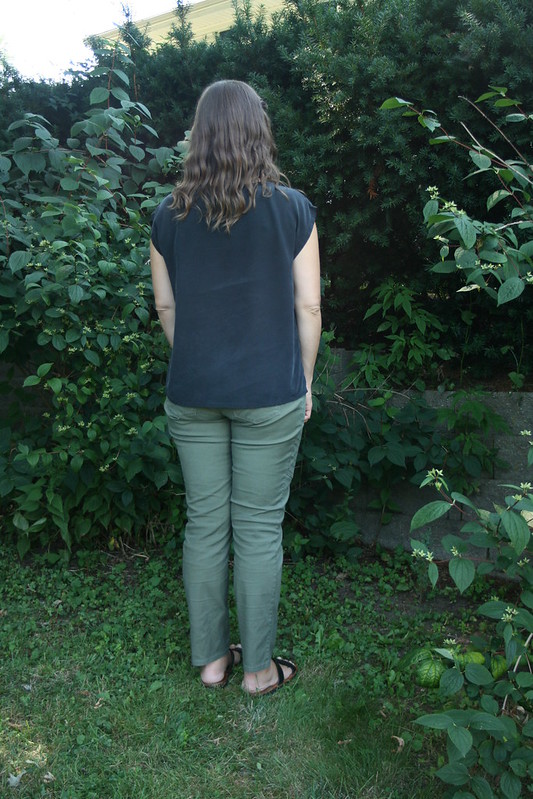 Sewing up this pattern was really fast and easy.  I made it in a size large this time.  It only has three pattern pieces:  a front, a back, and a neckband.  It was easy to sew the side and shoulder seams with French seams, and the neckband encloses the raw edge around the neck.  For the sleeves, I just did a basic hem with the raw edge turned under so that it was enclosed.  Fast and easy with no exposed edges left to fray in the wash! 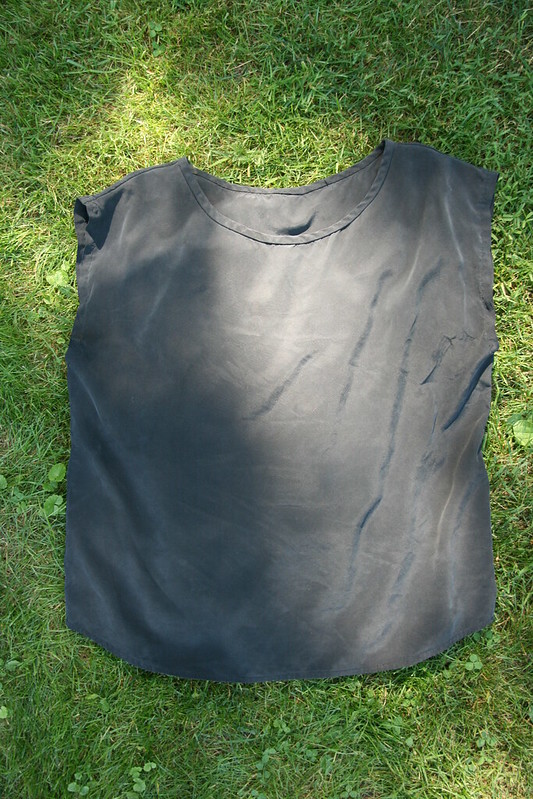 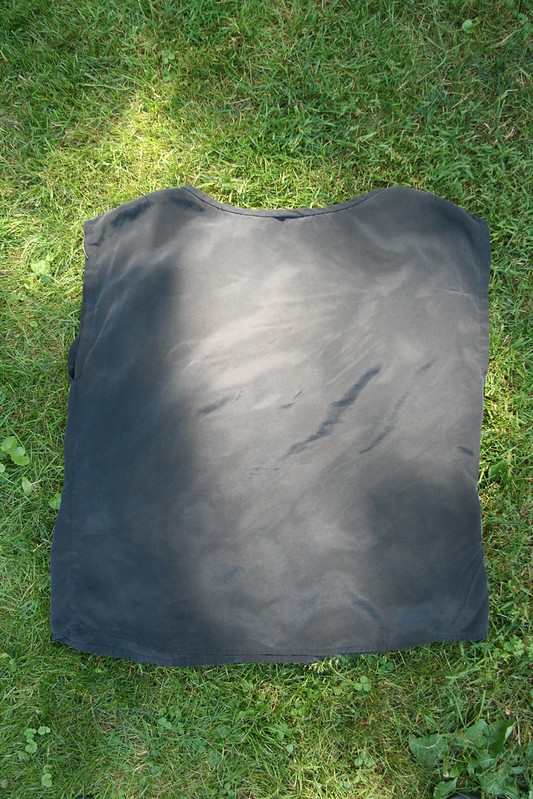 I love the boxy cut and drape of this shirt and, while I wear it as an everyday shirt rather than as pajamas, I can feel how lovely this would be as a silk pajama top.  If you are looking for a basic drapey, boxy shirt pattern that is quick and easy, this is for you!  I’ve already got another cut out in rayon.  Highly recommend! 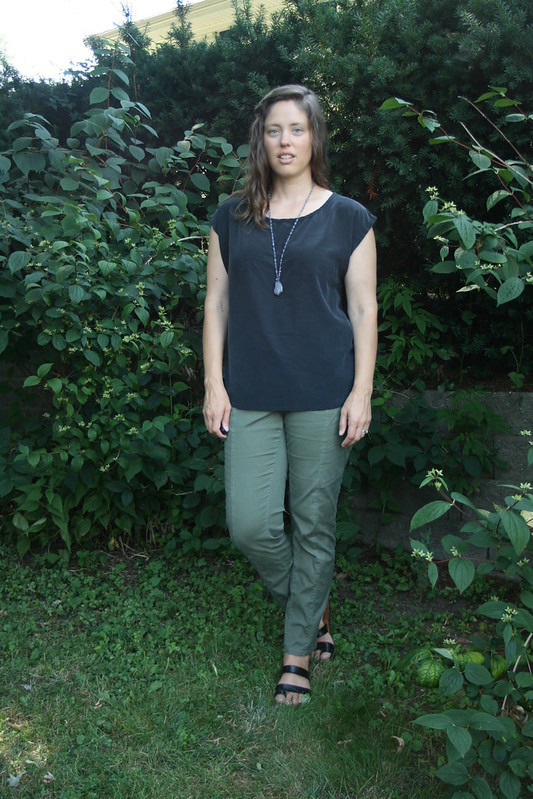 Hi, sewing friends!  It’s been awhile!  I planned to take all of July off from the blog, but had to stretch it a little longer.  We had family in town and I had no time to take pictures!  I finally rectified that, though, so it’s back to your regularly scheduled sewing posts. 🙂

First up is something I finished back in June.  It’s the Eucalypt Woven Tank Top & Dress Sewing Pattern from Megan Nielsen Patterns.  I have had this pattern for ages and have been wanting to make it, but haven’t until this summer.  I made two different versions of the tank in the same fabric. 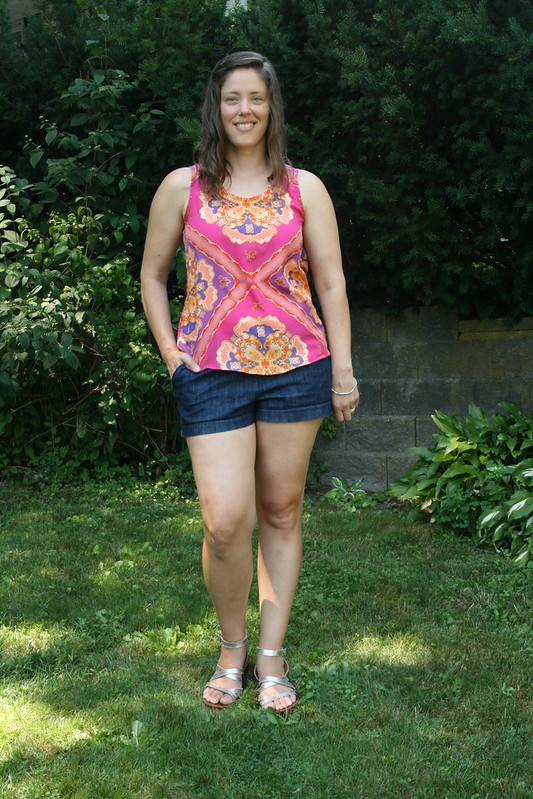 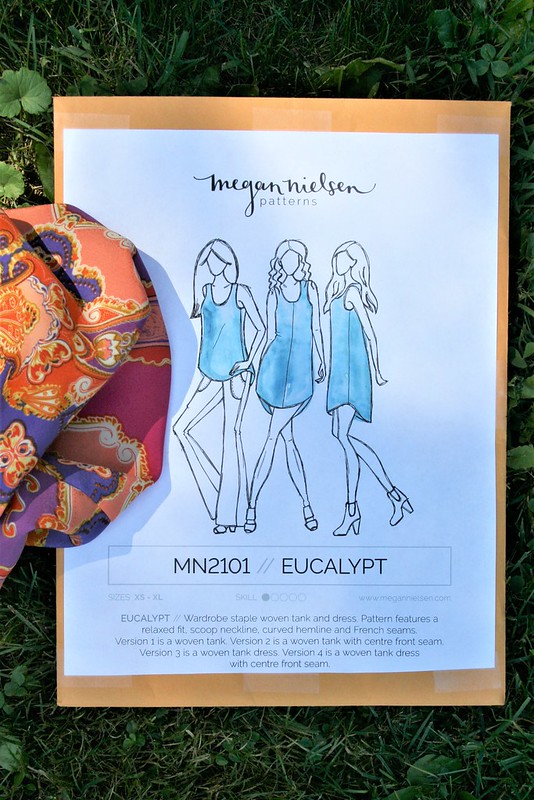 According to my measurements, I’m a medium at the bust and a large at the waist and hips, so that’s what I made for my first version.  I made it from a polyester crepe de Chine I bought at Hobby Lobby a few years ago that I’ve been saving to use for a wearable muslin.  Since the fabric is pretty shifty, I traced my pattern pieces out as full pieces rather than half pieces as printed.  Whenever I do this, I layer two pieces of tracing paper on top of each other and tape them together.  Then I line up my tracing paper at the cut-on-fold line, and trace the half piece.  I cut that out and then unfold my taped together tracing paper into a full pattern piece!  Since this was a PDF and I cut the pattern out, I just taped a piece of tracing paper to the pattern piece and cut it out to the same shape.  Then I opened it up so I could have a full piece.  Check it out: 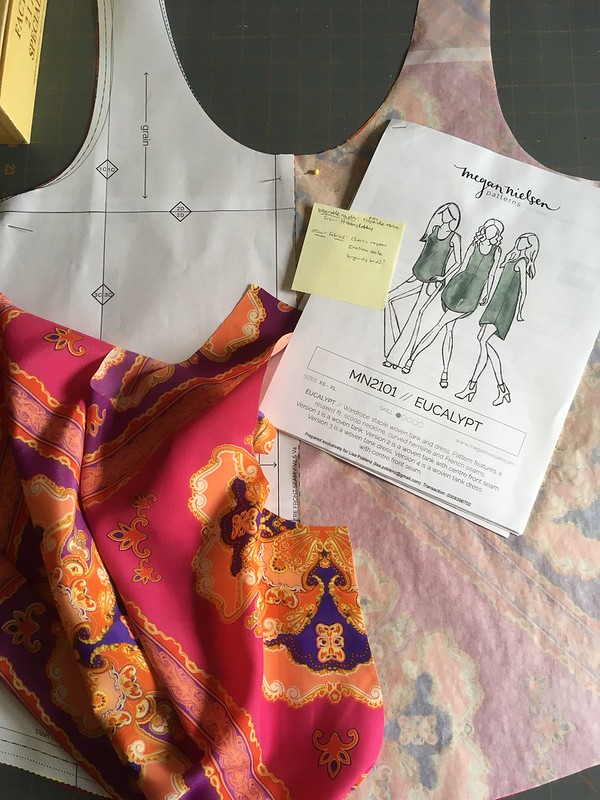 Version one was a bit tight across the back and the bust and was also a little tight on the front armscye.  I decided to go up a size on the bust and make a straight large for my second version since I was having some tightness all around. 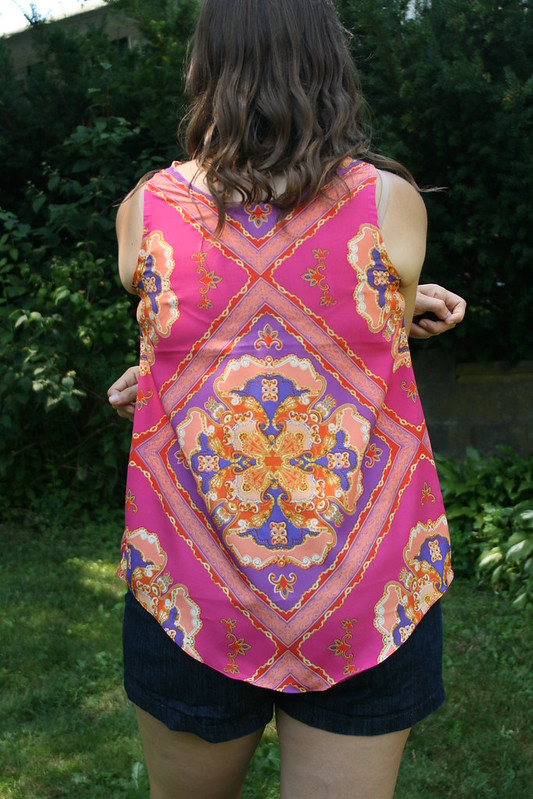 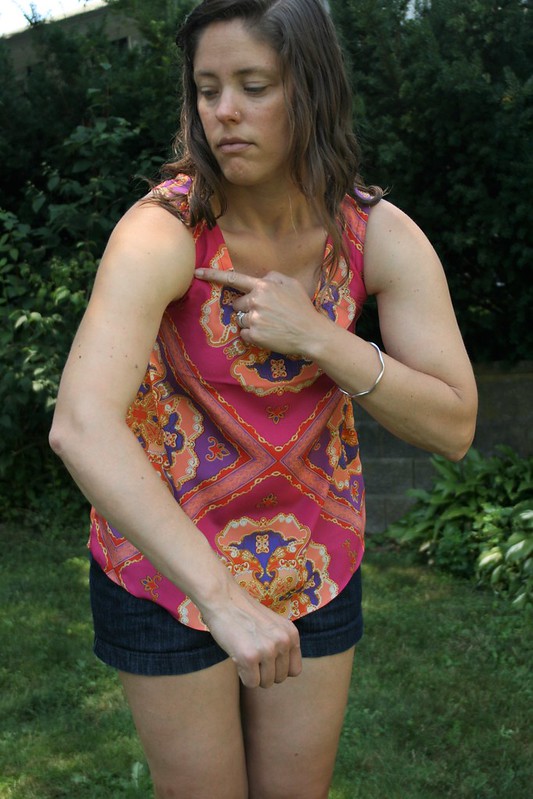 Tightness on the armhole front

Version two turned out a lot better!  I’m much happier with the fit overall. 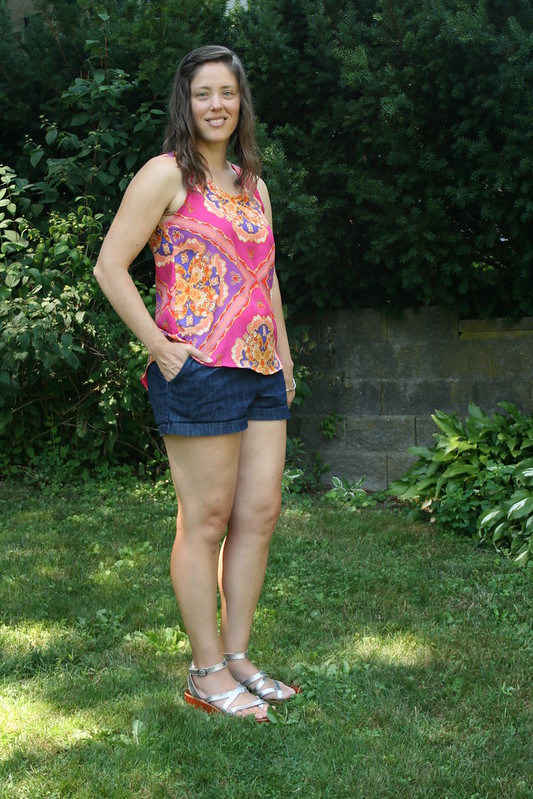 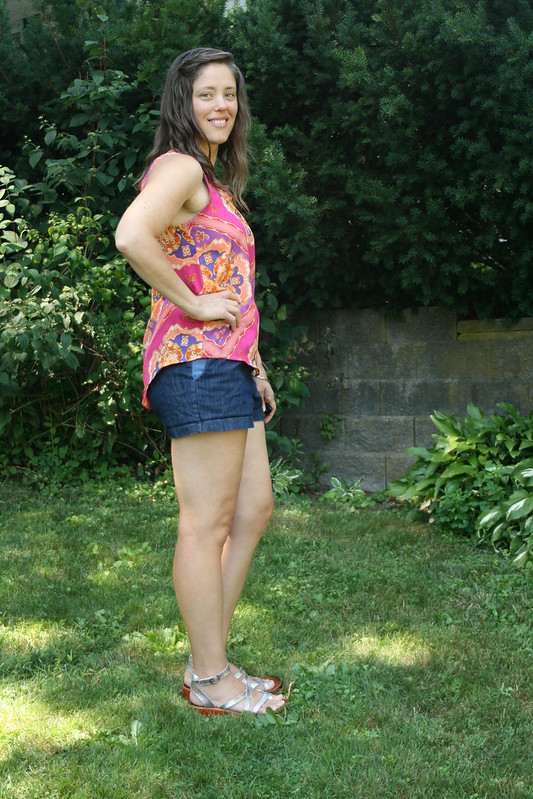 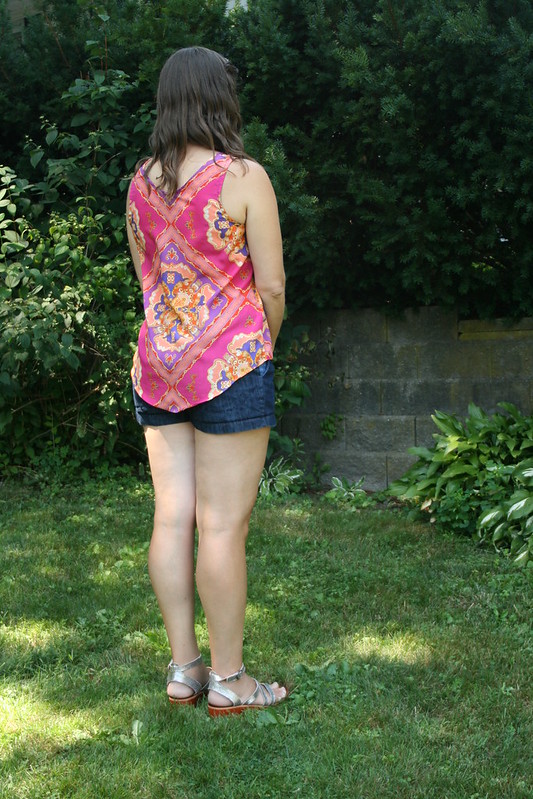 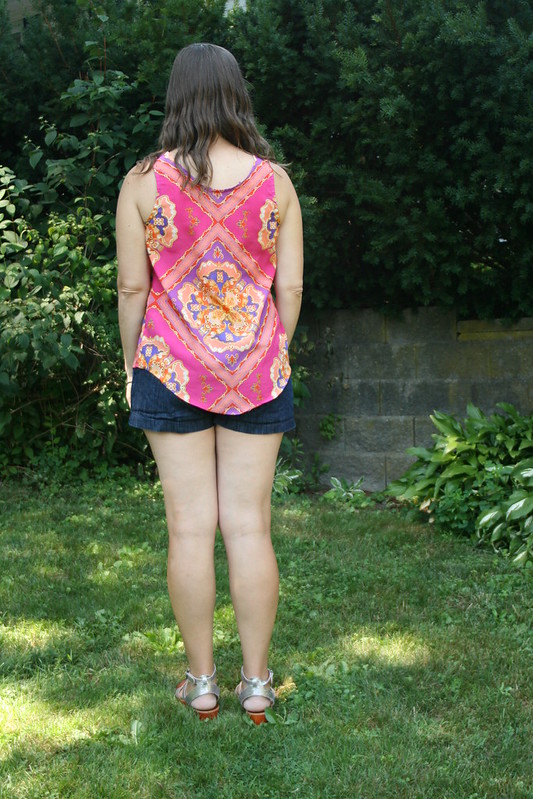 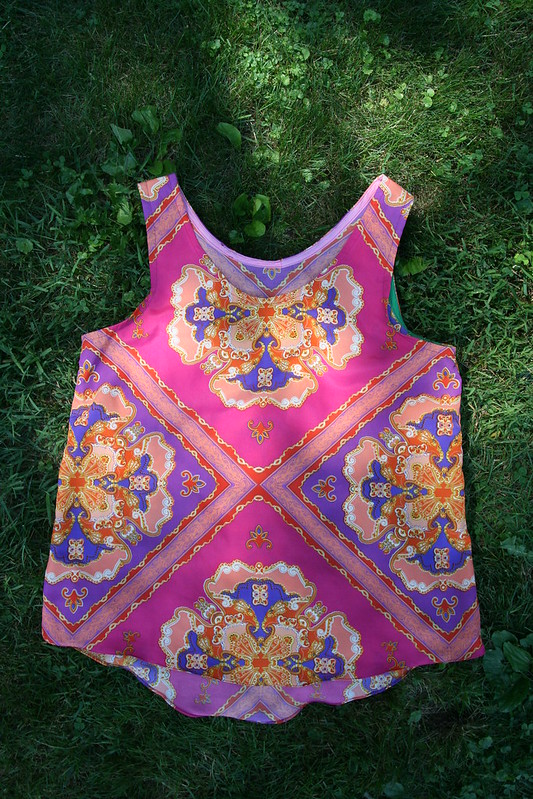 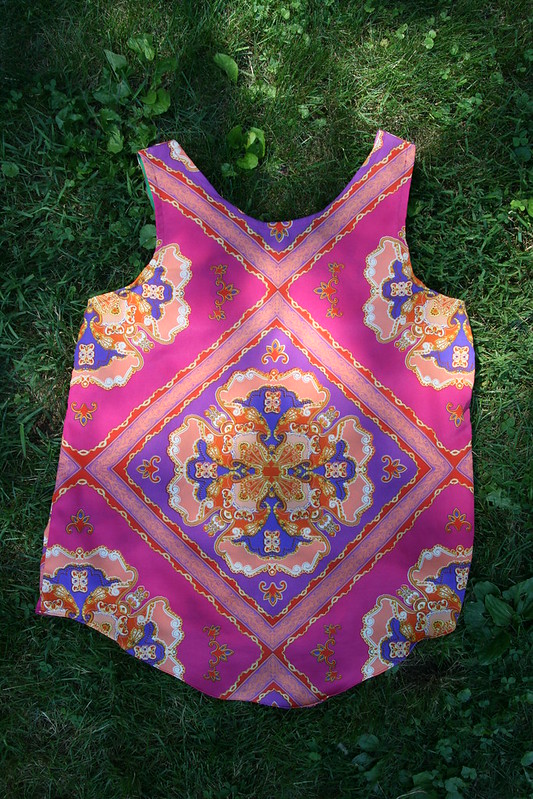 So, now, here is my quandary.  There are a few fit issues despite how comfortable it is.  The shoulder seam line looks like it is too far back. 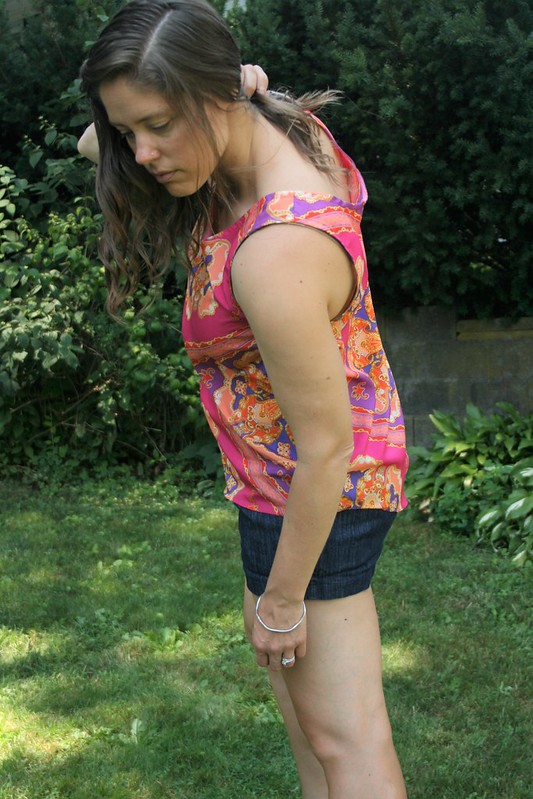 The side seam also curves as it reaches the top in a way that I’m sure it is not supposed to. 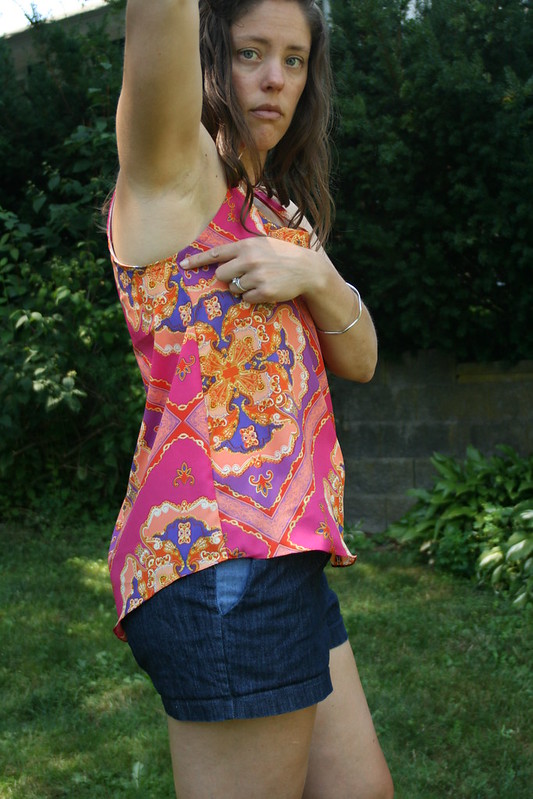 And I have some excess fabric in the back, that makes it look like I need a swayback adjustment. 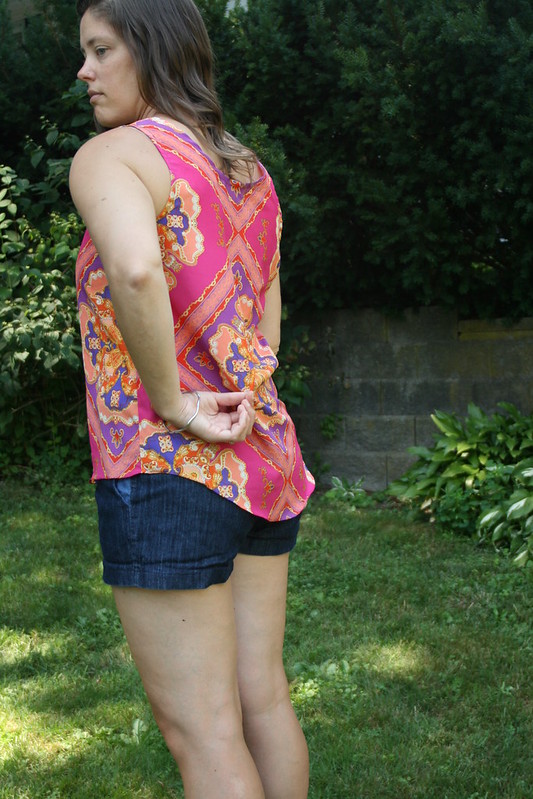 If I wear the top as is, it is comfortable and provides good undergarment coverage.  If I pull the shirt forward so that the shoulder seam sits where it should, the swayback problem disappears, but I have gaping in the armholes that make it look like I need a dart.  So, do I just ignore the weirdness and make any future tanks just like version two?  Do I do a swayback adjustment to get rid of the excess or add a dart?  Do I tinker with it?  Do I care enough to do a bunch of stuff?  I don’t know.  It is really nice to have a quick and easy pattern that you like and can just whip up.  What would you do?

Lastly, ever since I finished my 2017 Make Nine, I’ve sort of been floundering around with my sewing.  I feel like I have a very short attention span, want to sew all the things, and get tempted by new patterns left and right.  I missed that sense of purpose I felt when I made my MakeNine goals, so I decided that since summer is really only half over (we have until the autumnal equinox in September!), I was going to make a summer sewing plan. 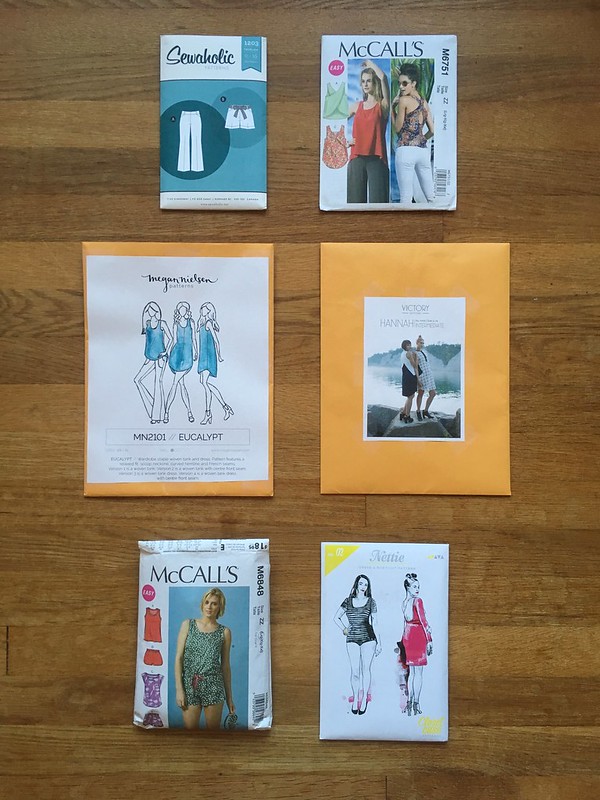 I posted it on Instagram and even made a hashtag for it:  #2017summersewing.  I only chose six garments, and I’ll feel free to slip other little things in if I want to, but these are things I plan to make.  So, one down and blogged, five to go!  I’ll keep you posted, but feel free to join in with your own projects if you want to!  I already feel more focused and creative in my sewing.  🙂