It’s not often that a dress pattern comes along that is fascinating and mysterious.  That’s not to say that you see a line drawing of a pattern and automatically picture every step just because you know how to sew, but you often know the general process of putting a garment together as well as what the pattern pieces might look like once you have been sewing for awhile.  So when something puzzling comes along, it’s kind of fun.

I’ve been sewing long enough now (and taking in massive amounts of sewing information through the magic of the interwebs) that a lot of patterns look similar to others that I’ve seen.  It takes a lot more for a pattern to surprise me, but that is just what happened when I saw Heather Lewenza’s Hannah dress from Victory Patterns. 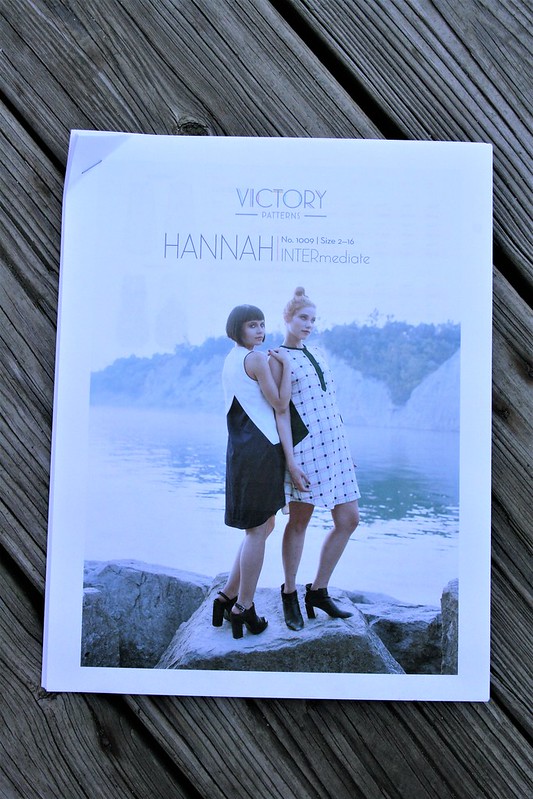 Link to the pattern here. 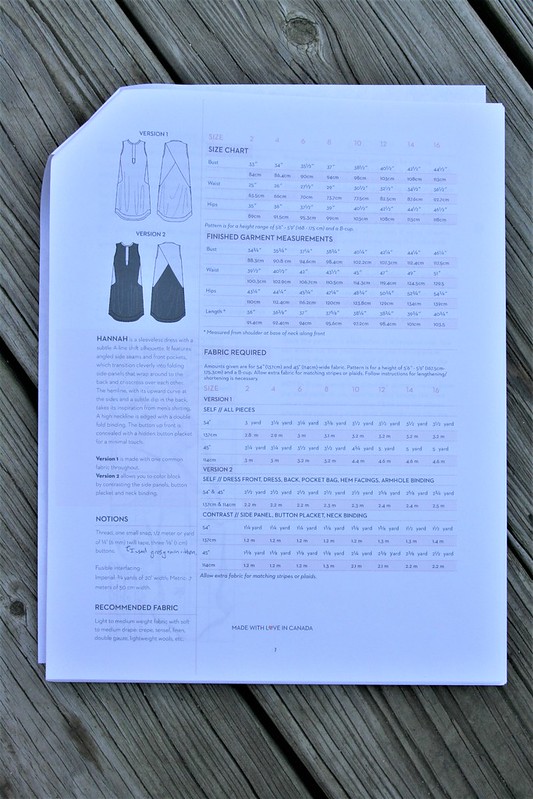 Heather made her dress from crisp cotton so you could really see the interesting back crossover that wraps around the sides of the dress to end in the pockets.  I had never seen a dress like that.

As I researched it online to see what other sewers thought of the pattern, I read over and over again that the pattern pieces were different from any they had ever seen, and that it was fun and intriguing to sew.  I tried to resist the aura of coolness that this pattern exuded, and for awhile I was successful.  It only came in PDF, which is usually enough to make me pass on a pattern, but in the end, I bought it.  I had to try this for myself. 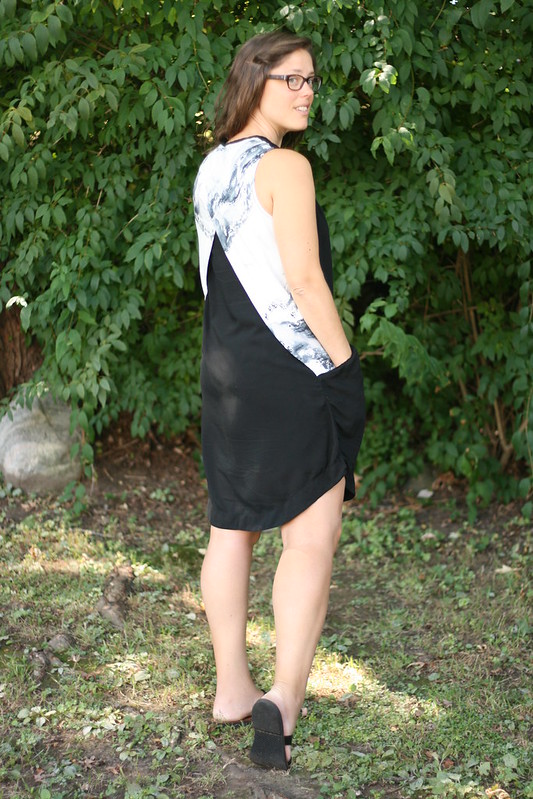 I deliberated over fabric choice for awhile, but finally decided to go with rayon challis for its fluid drape.  Another plus was that I had two coordinating rayons already in my stash–a black one from Field’s Fabrics in Kalamazoo, MI, and a grayscale watercolor rayon from Pintuck & Purl in Exeter, NH.  I had been saving that last one for just the right project, and I had finally found it. 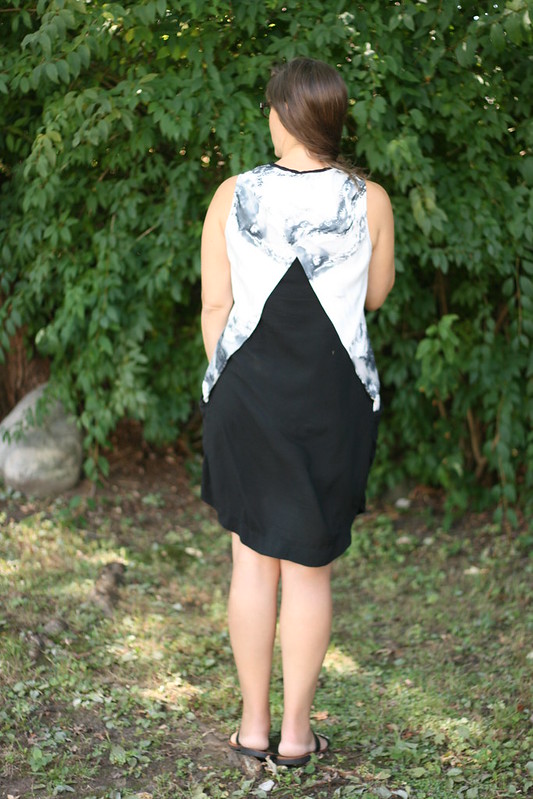 Once I was ready to get started, I decided to make a straight size 12, which meant sizing up on the bust.  A number of reviews I read said that the bust ran a bit small, so I sized up, which also meant I didn’t drive myself crazy trying to figure out how to grade between sizes.  This isn’t a pattern you want to try to blend sizes on or adjust beyond lengthening or shortening.  The pattern pieces are just too different. 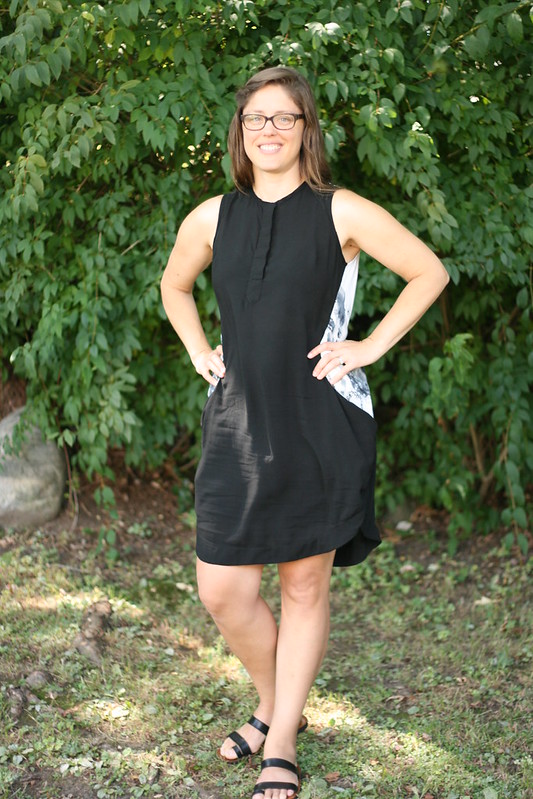 As soon as I began, I questioned my fabric choice.  You do a lot of stay-stitching initially, and mine puckered my fabric.  I immediately switched to a microtex needle and my walking foot, and hoped for the best.  The directions are so precise, which is great, but because of my inexperience working with rayon challis, I found that I was often stressed out, worrying that the dress wouldn’t turn out.  In the end, it did turn out just fine, but it has a lot of puckers that it shouldn’t have.  So, the rayon was good and bad. 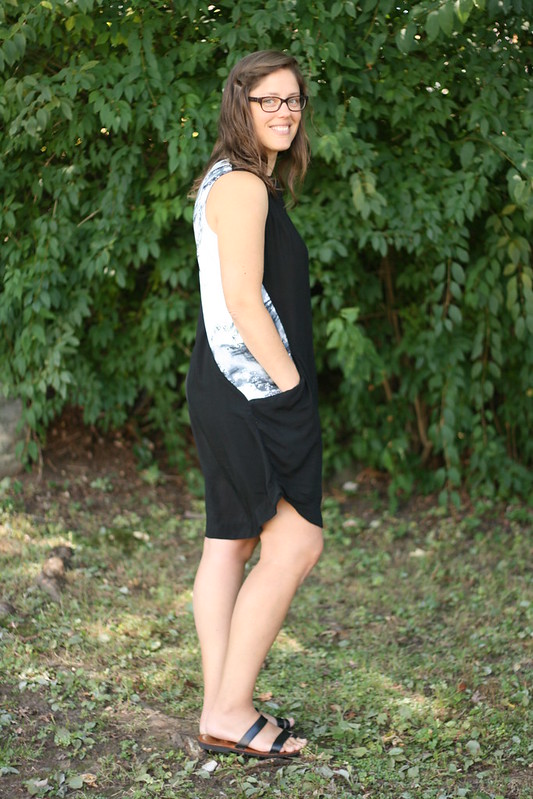 My overall takeaways are that (pro) I now have more experience working with rayon challis and the black hides most of the puckers, but (con) the dress isn’t as well-made as I would have liked.  I think if I made this again, I would make it in something more stable, which would admittedly make the silhouette more A-line, but would also be more enjoyable to sew.  The other thing that I am beginning to think after sewing four garments from rayon this year (not all blogged) is that with the exception of the Cotton + Steel rayon, it doesn’t feel durable.  It’s comfortable and presses well, but something about it makes me think it won’t last as long as garments I’ve made from other fabrics.  We’ll see if that proves to be true or not.  So far I think I like silk crepe de chine better. 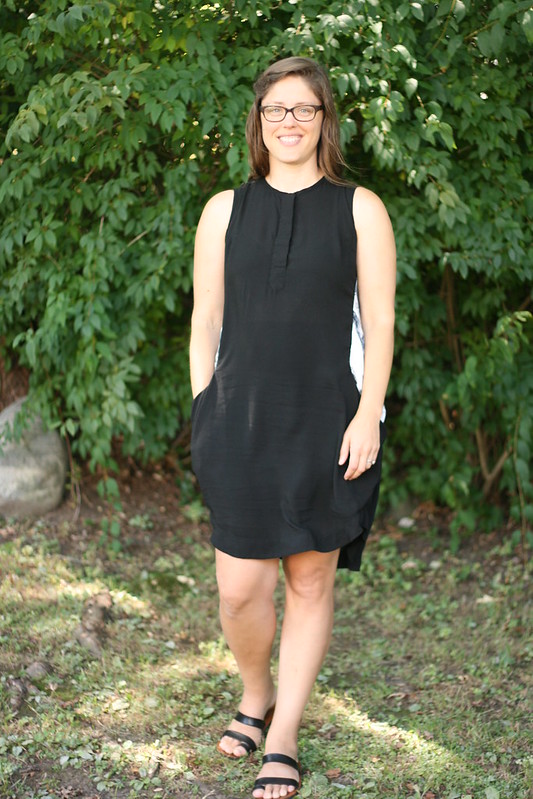 But, despite my learning curve with rayon, this dress did get finished and has been worn.  And I love it.  It’s so cool!  I would certainly make it again and would recommend it to intermediate sewers.  I’m so glad I took the plunge and bought the pattern.  I’m also hugely impressed that someone’s brain could come up with this.  I wish I had taken pictures of the unique pattern pieces as I sewed, but I didn’t.  😦 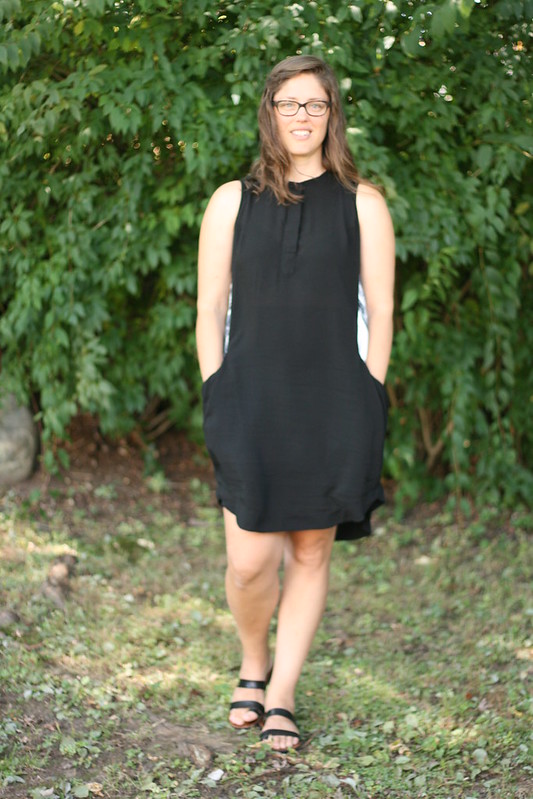 So that’s one more down on my 2017 Summer Sewing list.  The autumnal equinox is today, but I managed to get my last summer garment finished on Wednesday.  It might take a little while for everything to show up on the blog, but it’s all done and now I’m setting my sights on sewing some fun things for autumn.  What about you?  Do you have any autumnal projects planned (or spring for those of you in the southern hemisphere)?  I love planning projects.  Other than completing projects, planning them is my favorite part.  🙂 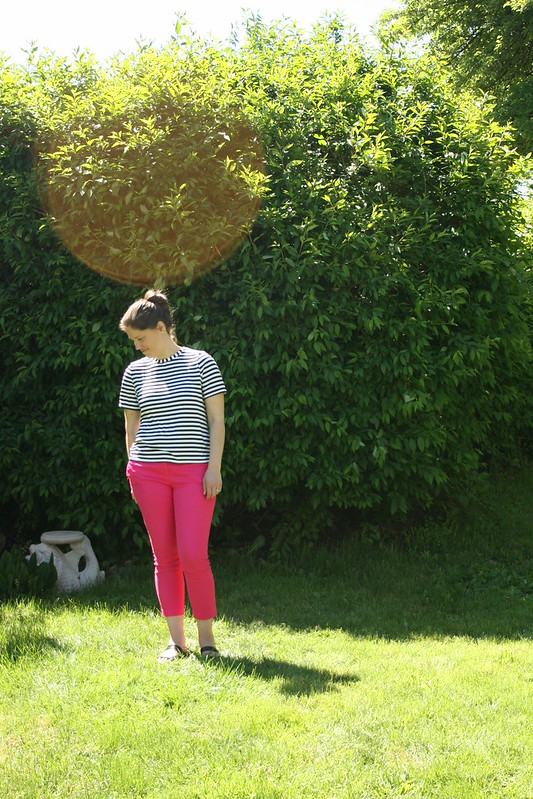 About a year ago, I would have said that it was crazy to spend time sewing t-shirts when they can be bought so cheaply, but I think differently now.  T-shirts are quick, satisfying, and really fun.  They are the perfect project in between more difficult projects because, not only are they fun and easy, they build your wardrobe.  For all these reasons, I decided to make a black and white striped Lark Tee (pattern by Grainline Studio). 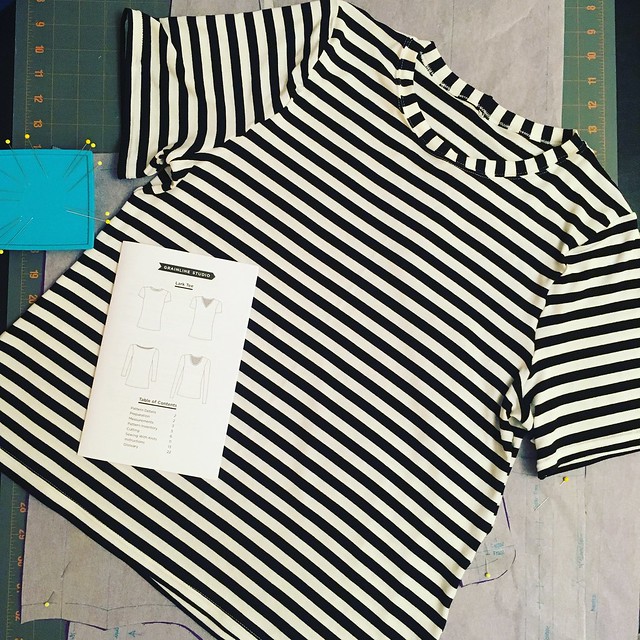 This is now my second Lark Tee (my first, a long-sleeved, scoop-neck version can be found here).  This time I went for short sleeves and a crew neck.  Here are my notes:

Because I planned to wear this shirt untucked, I cut off about 4″ using a stripe as my cutting guide, which was just right.  (For reference, I’m 5 feet, 8 1/2 inches tall.)  I tried to cut the neckband with one stripe going around the neck, but it didn’t work out well, so I switched to the neckband you see in the pictures, which I really like. 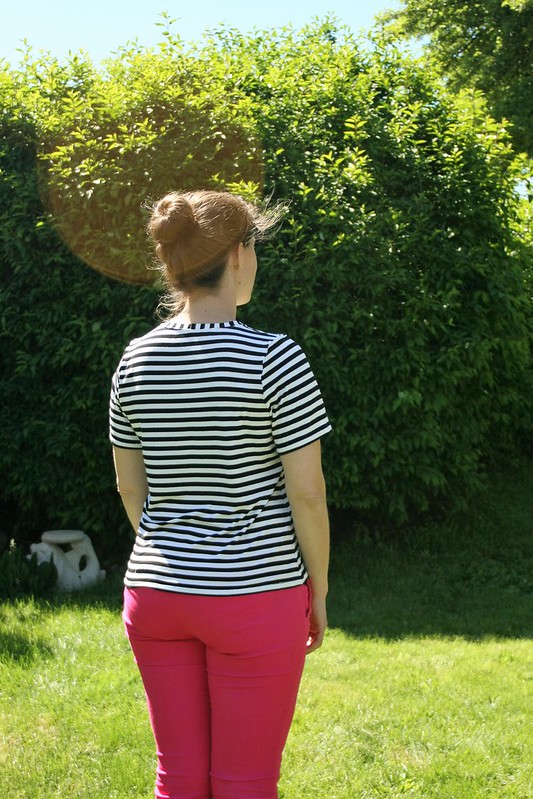 The fabric is a really nice rayon/Lycra from Pintuck & Purl.  I would say it’s somewhere in the light- to mid-weight zone, but is still fairly opaque.  It was great to work with. 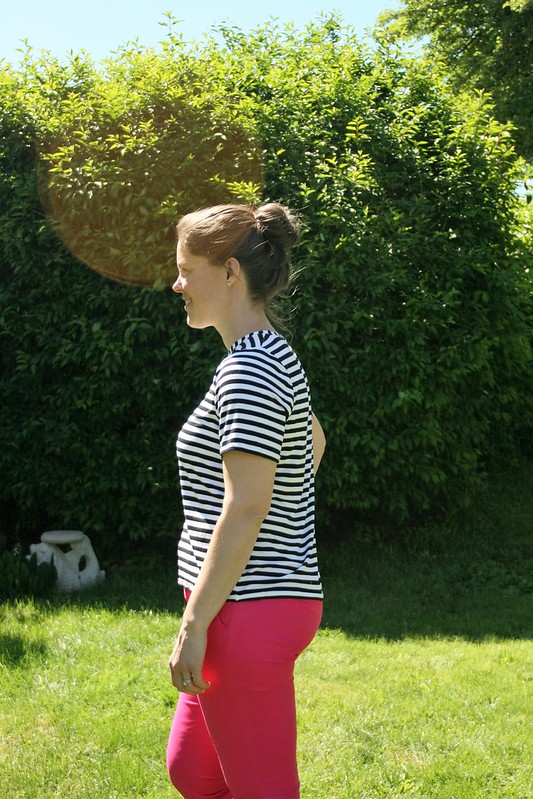 Overall, I like this pattern.  Sometimes I wish there was a little more shaping on the sides, but I can always add that later.  I would really like to try a v-neck version at some point, maybe with this fabric, but we’ll see. 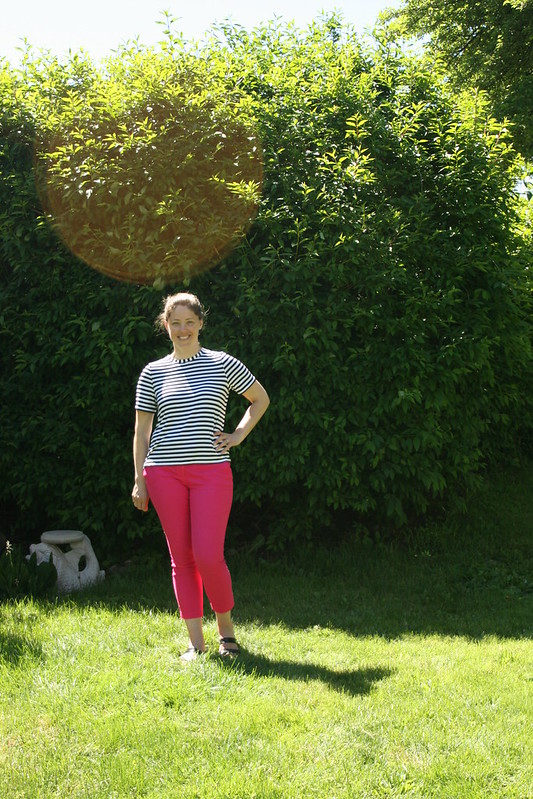 Do you have any favorite t-shirt patterns you want to share?  I’d love to hear about them in the comments.