I’m really excited about the jacket I have to share with you today.  I didn’t sew it—I upcycled it! 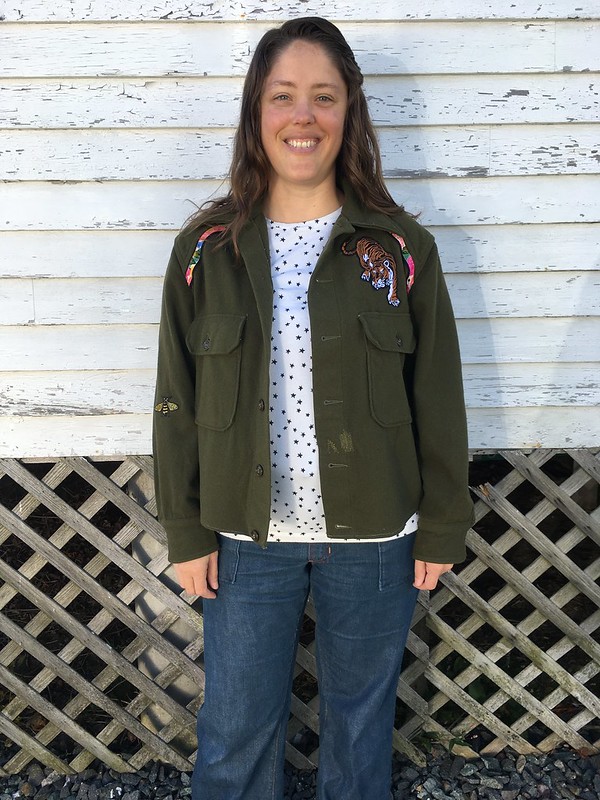 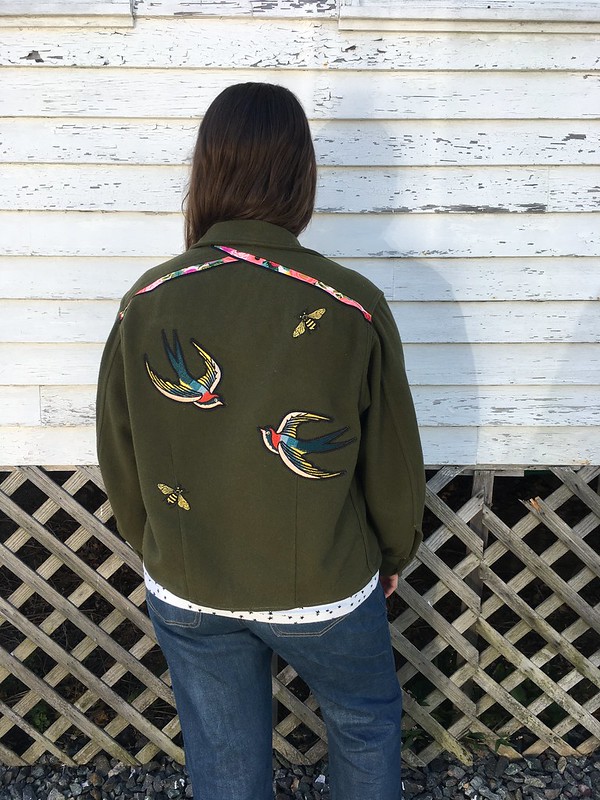 This wool shirt jacket was waiting for me at the Army Barracks, a military surplus store in Salem, MA.  I guessed from the collar that it might have been made in the 1970’s.  Do you think I could be right?  Clearly it had already been altered—there were a few patched and darned areas and the hem had been changed, but that didn’t bother me.  It gave the shirt an interesting history.  Since I love wool, olive green as a neutral, and shirt jackets, I bought it.

After getting it home and washing and drying it, I decided to redo some of the mending.  I covered the original darned area on the sleeve with more darning in a thread color that matched the jacket better.  To do that, I dropped the feed dogs on my machine and used a darning foot and a zigzag stitch.  Then I sewed back and forth in a crazy scribble all over the original darn to cover it up. 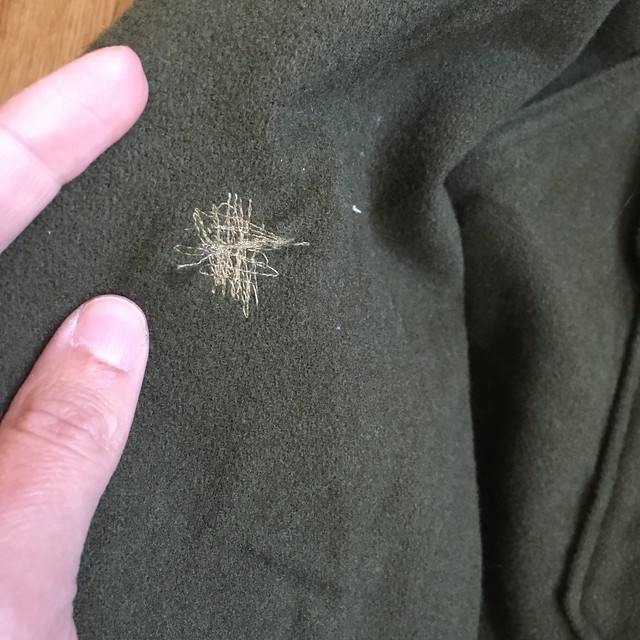 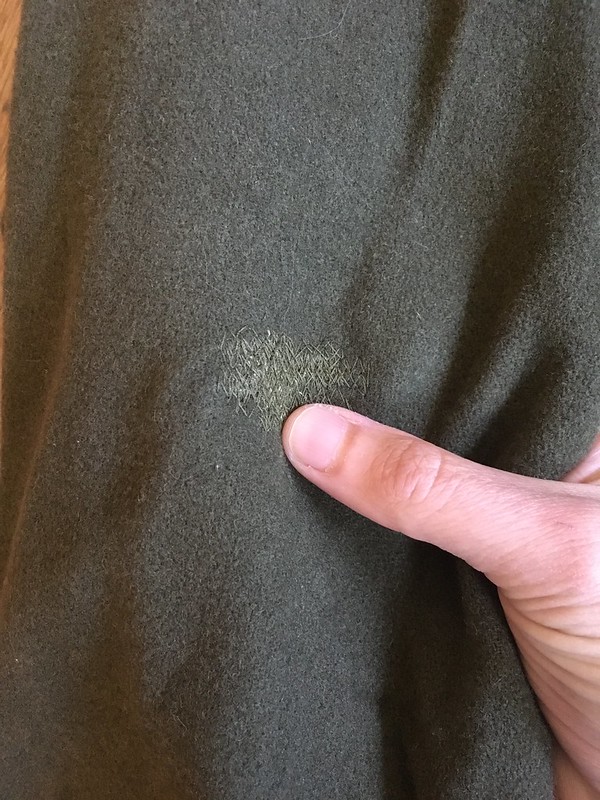 I also redid the area that had been patched on the button band. 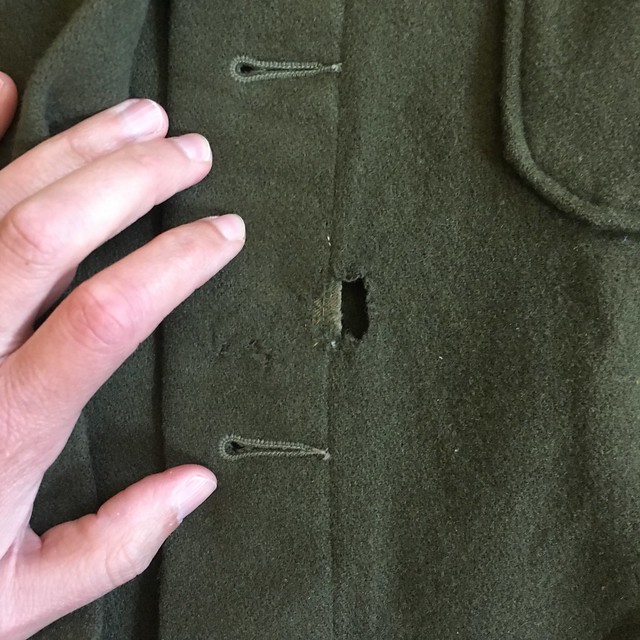 I cut a rectangle of a matching cotton twill fabric, folded and pressed under the edges, and sewed it to the back of the hole. 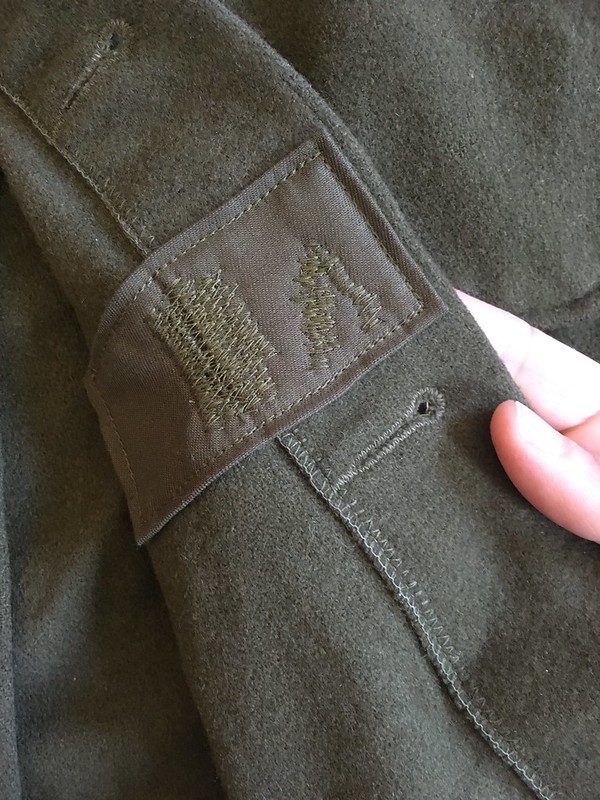 Then I darned the hole the same way I had on the sleeve. 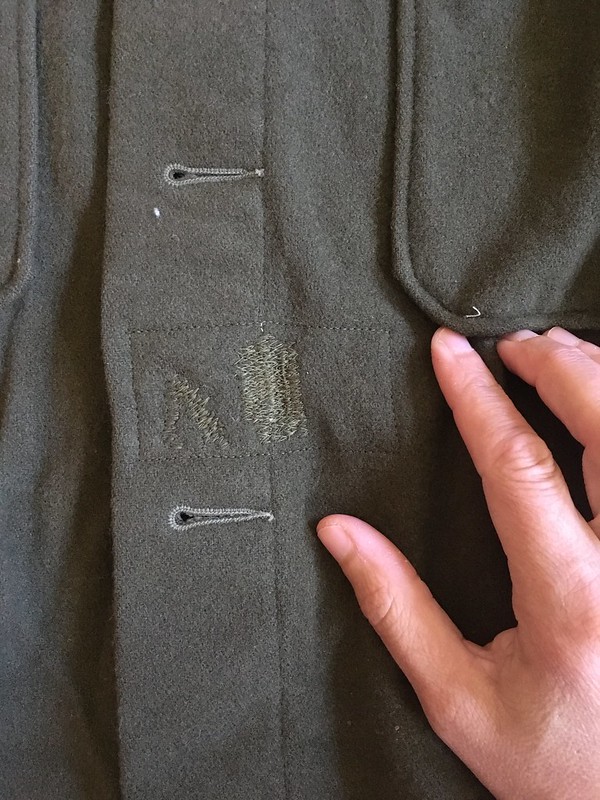 The next thing the jacket needed was standout details.

I often think about decorating my clothes, but usually talk myself out of it.  Not this time, though!  This shirt jacket seemed like just the garment to try adding a little fun to.  Pink + green, florals + utility, “flair”—I love it!  I had a lot of Rifle Paper Co. rayon Les Fleurs bias tape left over from when I made my friend a linen jacket, so that is where I started.  It seemed like a good way to highlight the unique back and front lines of the shirt yoke. 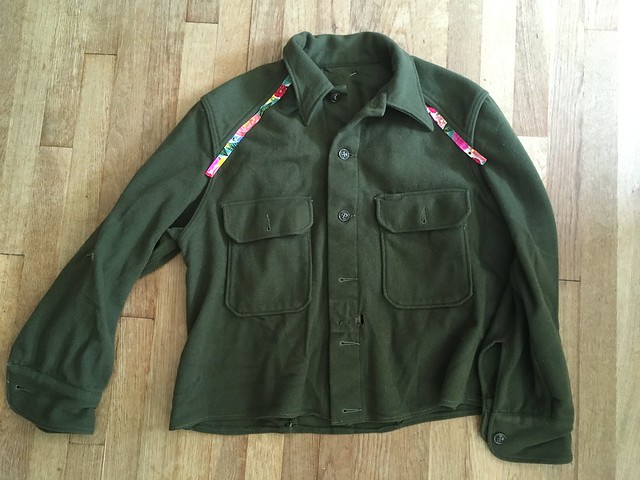 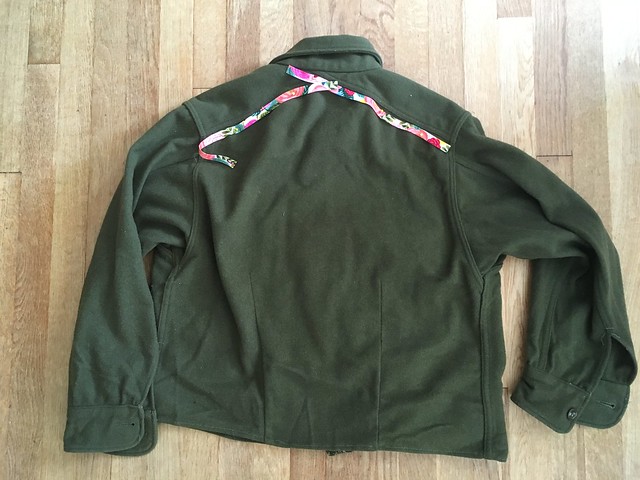 Then, I thought maybe a patch would be cool.  I found a great tiger patch at Joann Fabric.  I ironed the patch on and then used advice I had seen from Lauren Taylor (@lladybird) on Instagram, and sewed the edges of the patch with regular thread in my bobbin and clear thread on top using a tiny zig zag stitch.  I LOVED it!  But it needed something more. 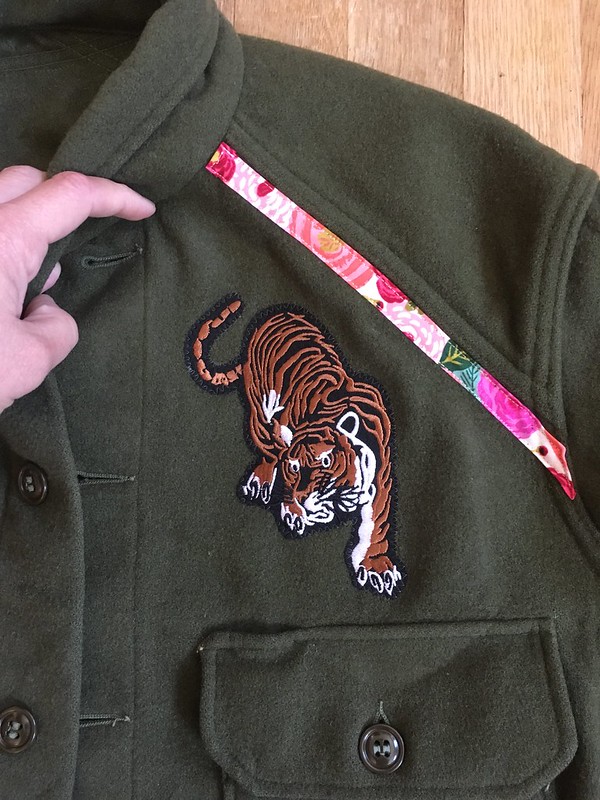 I started hunting around for patches, maybe some swallows.  Somewhere around this time, I started to see images of embroidered Gucci jackets.  Some of them I liked, some I didn’t, but I discovered a few things:  the back of the Gucci jackets I liked best had images that related to one another somehow, whether they told a pictorial story or were just grouped in a way that was visually pleasing.  I also discovered that you can find a lot of knock-off Gucci patches on the internet if you want to make your own version of a Gucci jacket.

I found a great pair of swallows on Amazon.  Once I put those on the jacket, it felt almost finished. 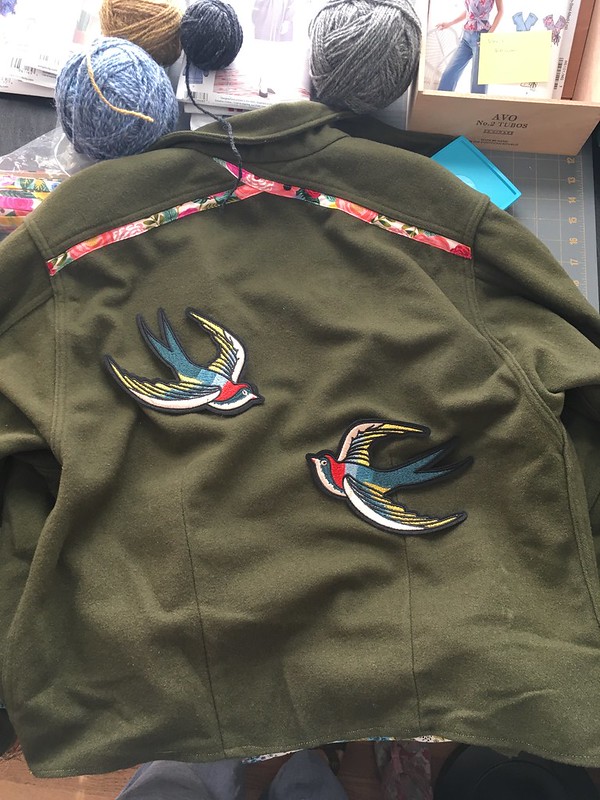 I wanted to add some bees, but not the Gucci ones with red and black bodies.  I wanted some with yellow and black bodies that were somewhat realistic looking.  I finally found them from RichLoveFinds on Etsy.  Two went on the back, and one covered the area that had been darned on the sleeve. 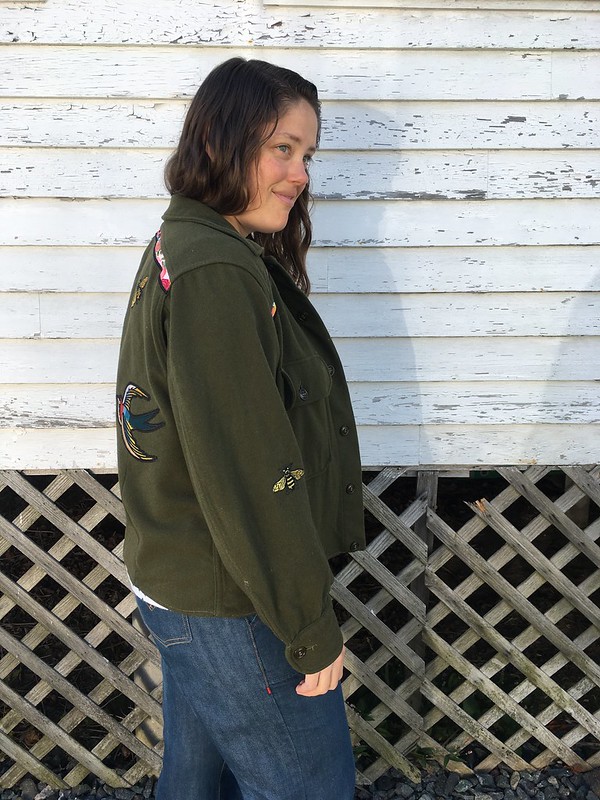 The original plan was to cover the patch job on the button band, too, but it made the front visually unbalanced, so I left it as it was.

At this point, it was so close to what I wanted, but something wasn’t quite right.  The floral bias tape related well to the jacket, and the patches related well to the jacket, but the bias tape and the patches weren’t meshing together, even though they shared some of the same colors.  Then I figured it out!  If I could find a thin black trim to sew on the bottom side of the bias tape, it would have the same outline effect that the patches had.  I found some that was 1/8″ wide at Joann’s, and sewed it on. 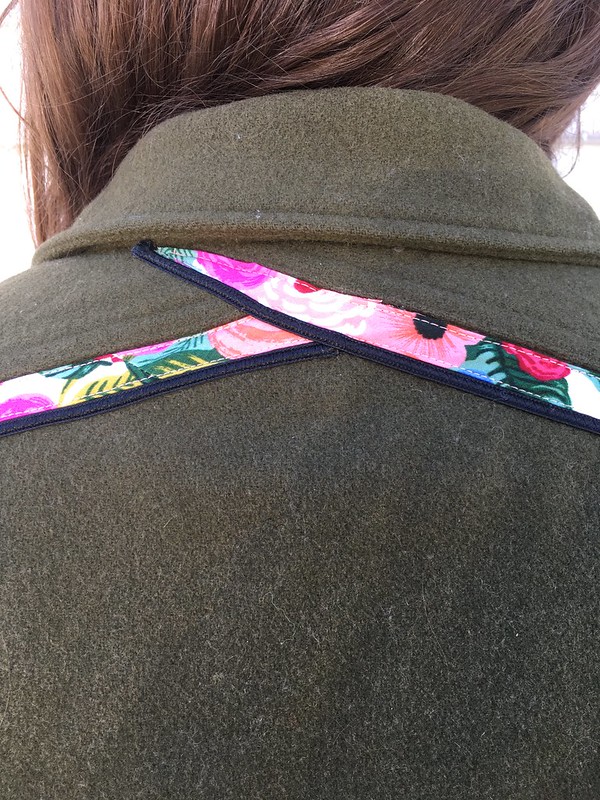 The ends tended to fray, so I tried to zigzag them, and then applied Fray Check. 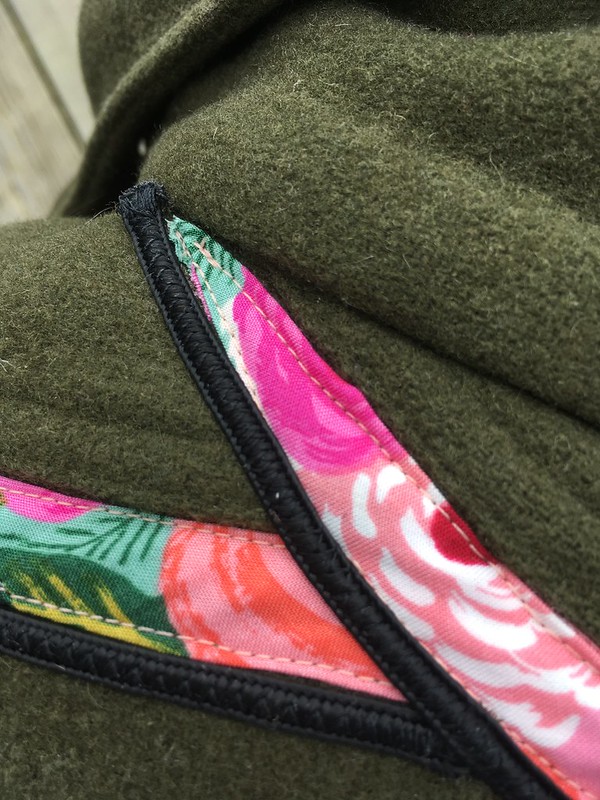 That was somewhat successful.  It wasn’t perfect, but it was close enough for me.  NOW it was just right! 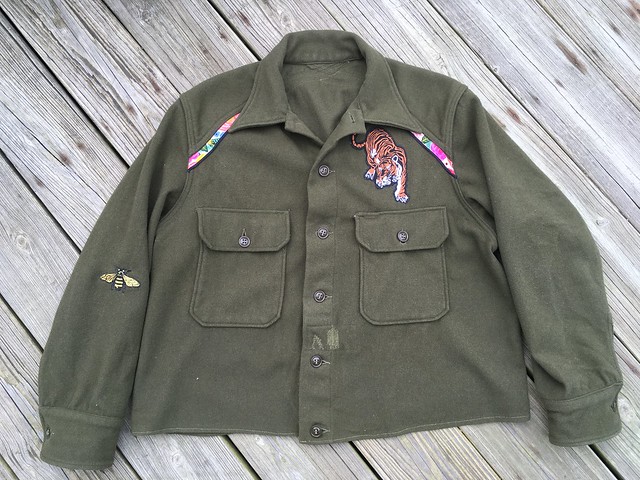 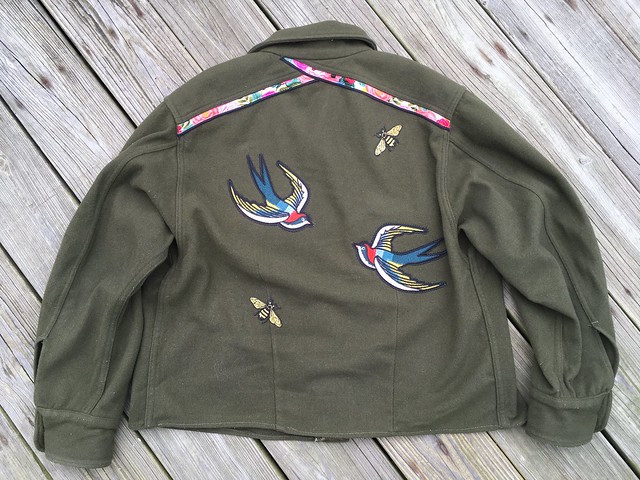 I have worn this shirt jacket so often since I made it.  It is a great layering piece as the weather cools down.

P.S.  If you suspect that all the decorations I added to this jacket cost more than the jacket itself, you would be correct.  If you take on your own project like this, you can decide if you want to think about that beforehand or not.  😉