It was a grey and stormy day when I finally cut into a project I had long been contemplating.  It was a refashion, but not just any refashion.  This one involved sewing with a material I had never tried before:  a down jacket.  I had chosen the patterns that were going to help me achieve my goal and planned a little more than half of the project, but there were still questions in my mind about how I was going to finish the rest.  Inspiration images had been pinned to my Pinterest board, but still I mulled it over…until the snow day.  It was finally time. 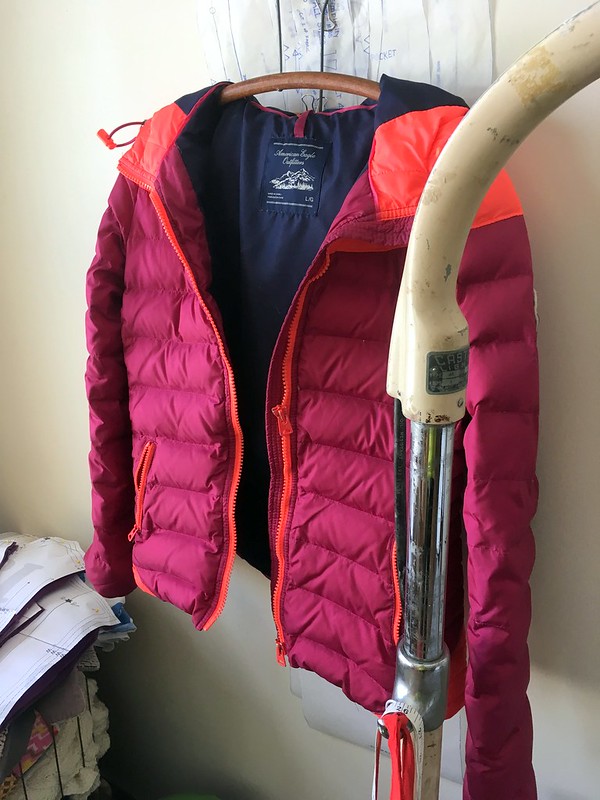 I had already been scheming about refashioning a down jacket into a scarf after seeing these ones, which was the product of a collaboration between Patagonia and Alabama Chanin, but my down-sewing plans expanded when we visited Colorado last winter and I saw a woman wearing a down skirt.  It was such a brilliant idea.

Google revealed that down skirts are actually a thing, even though the Colorado one was the only one I had seen in real life.  So, after a ton of thought, I chose New Look 6843 for the skirt portion, and the waistband from the leggings in McCall’s 7261 for my stretchy waistband.  Since I wanted this to be a pull-on skirt, a waistband and some gores/gussets/godets in the side of the skirt were in order (after seeing the skirt, you can tell me which term is the right one for what I did 😉 ). 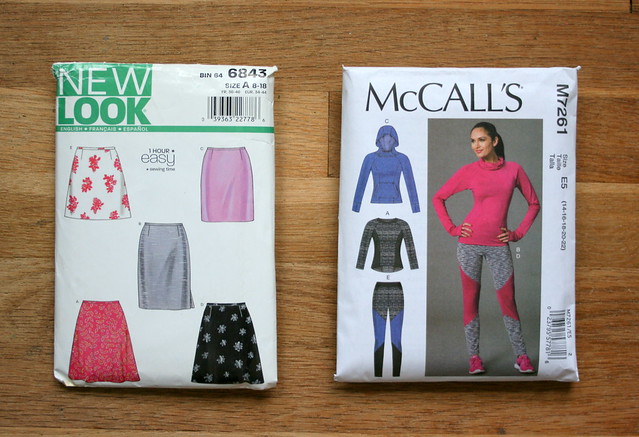 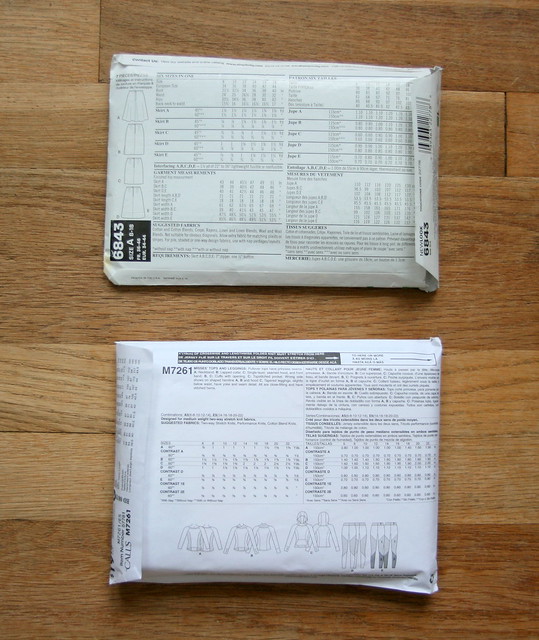 I managed to turn the back skirt into a single piece and eliminate the zipper.  All of that fit onto the back of the coat, allowing me to use the bottom of the coat as my hem.  It got tricky when I came to the front because that was supposed to be one piece, too.  I really wanted to incorporate the coat zipper in a decorative way (although I planned to sew it shut), and I also wanted the pockets both for decorative and functional purposes, but in the end, it was too much of a struggle.  I realized that by opening my sleeves and sewing them together, I would have enough for my front piece.  I still had plenty of the stretchy fleece left from my Toaster Sweaters for my waistband and gores/gussets/godets.  Then it was all construction.

This is probably the point when you are asking how in the world I cut and sewed that crazy stuff.  That is a very important question.  Here is what I did:  I marked my cutting lines with a water-soluble pen and sewed with a straight stitch on either side of my cut line in the hopes that it would hold all the down in.

Do you think it worked? 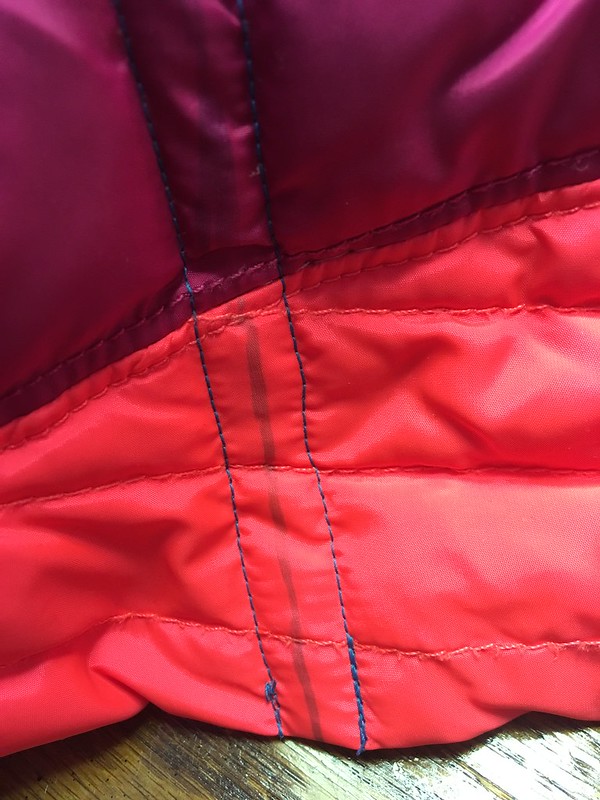 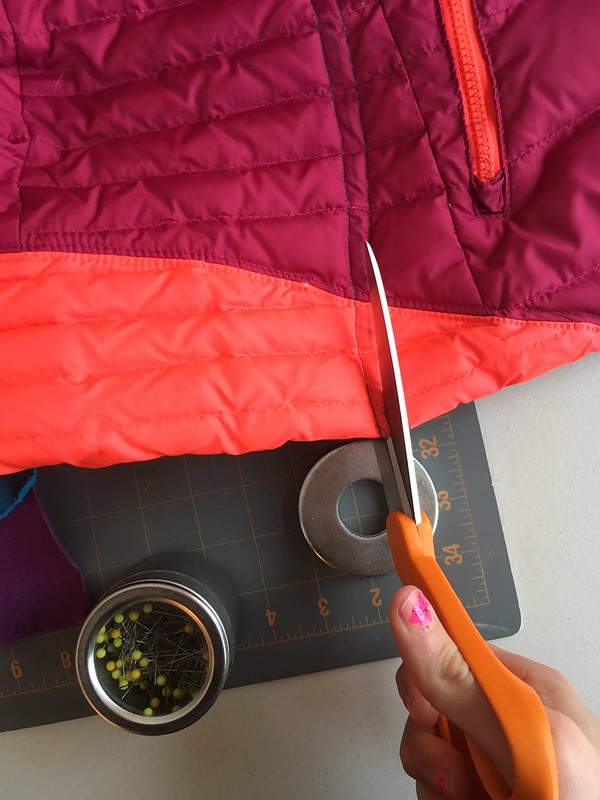 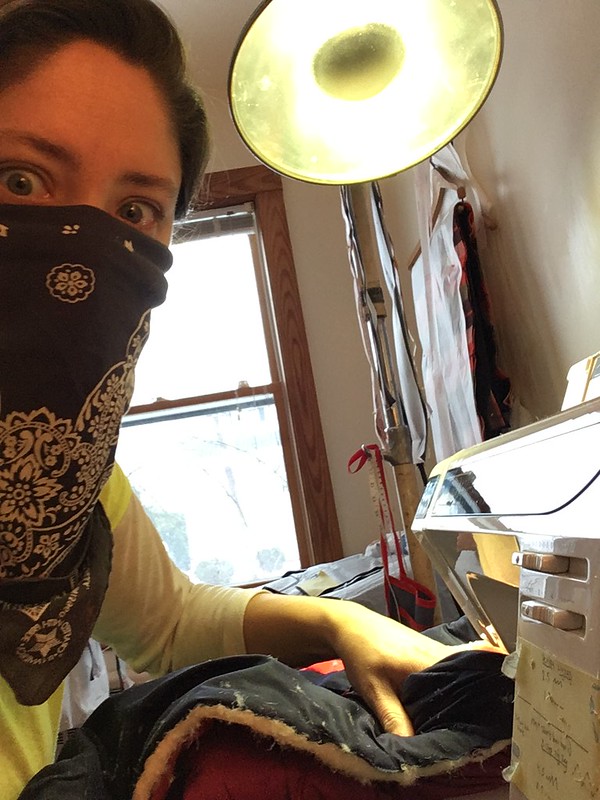 You can’t see it in this picture, but I also had pink-eye (conjunctivitis) at the time.  Nice, huh?  (Luckily no down got in my eye.  That would have been…um…gross.) 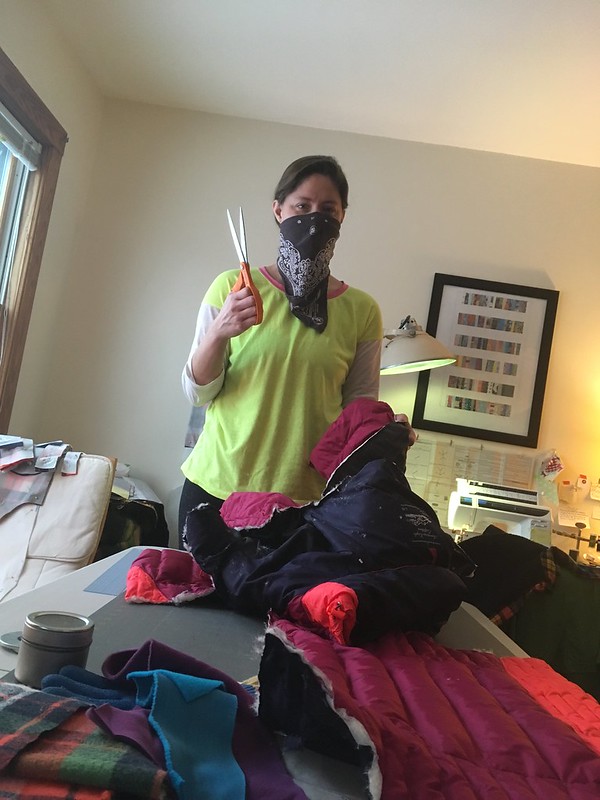 I had the BRILLIANT idea of vacuuming off the edges after I cut them.  I do not recommend this.  Maybe you thought of the problem with this.  It actually dislodged things, so it was sort of like it was snowing outside and snowing inside.  That was the point at which I realized I really needed to get this finished that same day.  We had some sickness in our house that week, and I wasn’t feeling my best, but I decided to power through in the hopes that it was all in my head.  (It wasn’t all in my head, but I powered through anyway!) 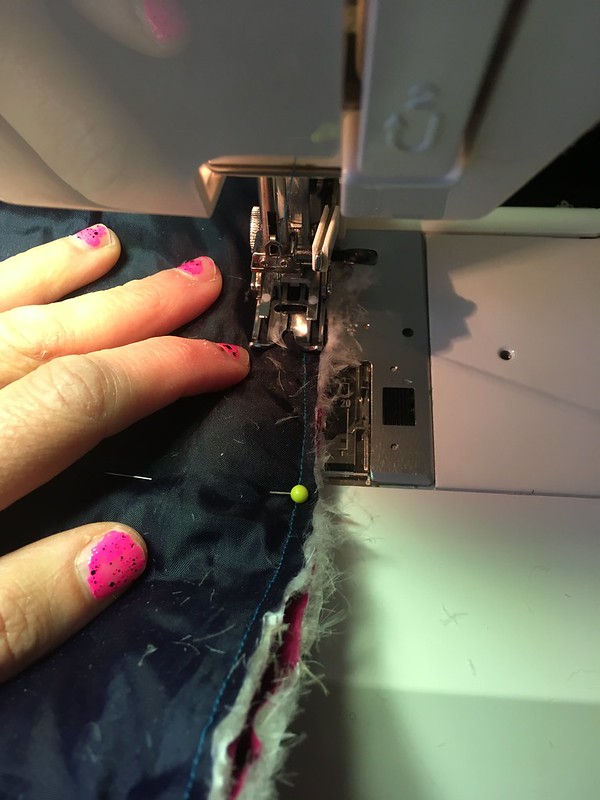 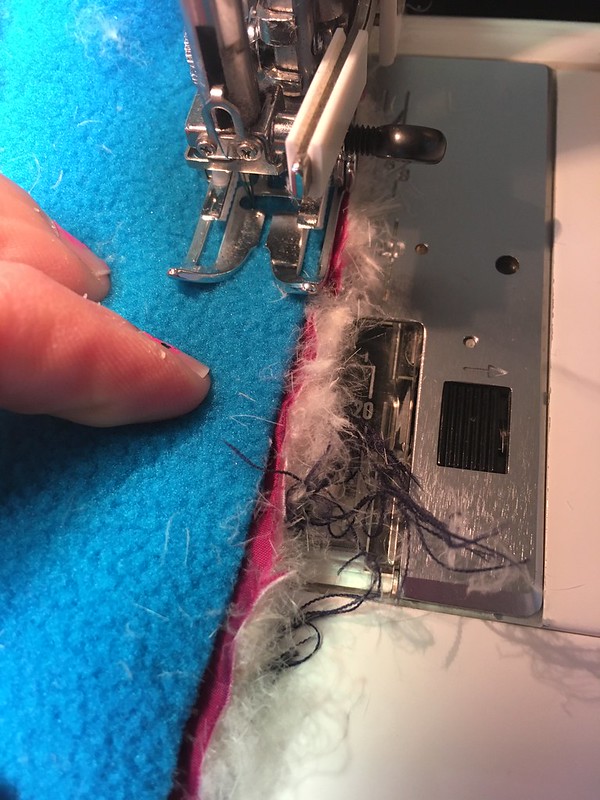 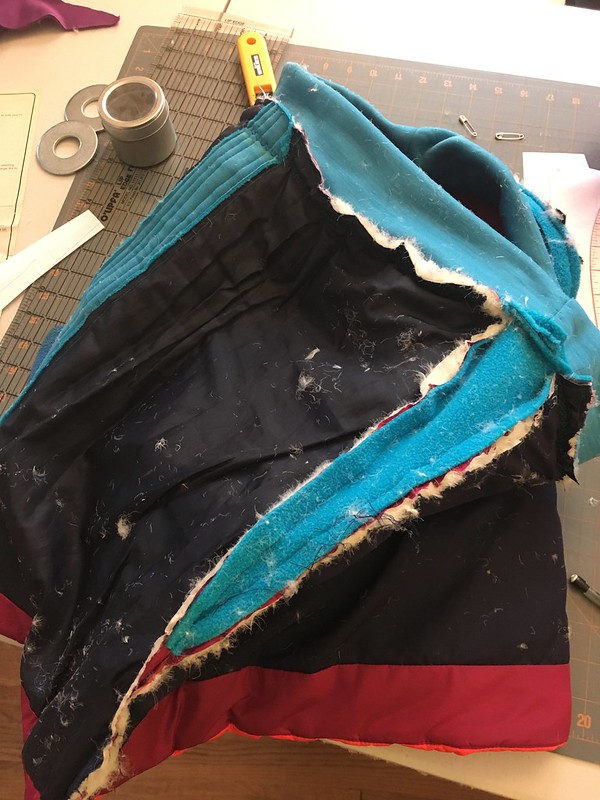 I also realized that I needed to cover every seam on the inside if I didn’t want to perpetually shed feathers.  This was the point where things got a little…”Becky-home-ecky” (sorry if your name is Becky).  The finishing, while functional and necessary, didn’t meet the vision I had in my head, but I was sort of racing against the down and my nausea.  The good news is, when I’m wearing it, I think it looks like something I could have bought at an outdoor store.  (If you disagree, you don’t have to tell me.)  It’s only if you get up close or look inside that you see the craziness, and since people don’t do that when I’m wearing it (thank goodness!), I think I’m safe.  Want to see it?  Check it out! 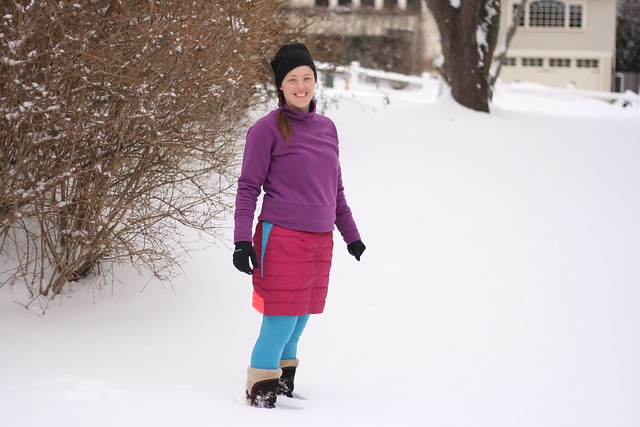 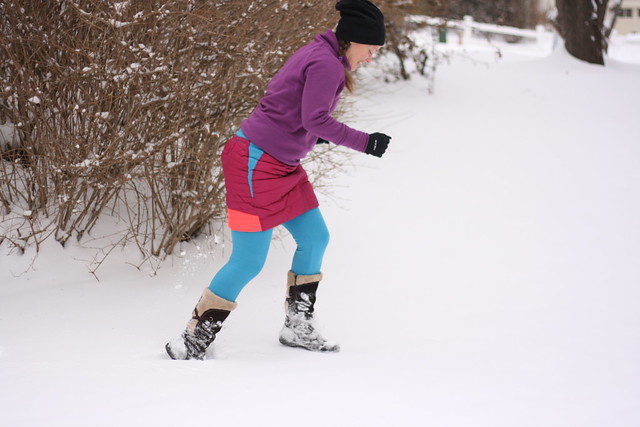 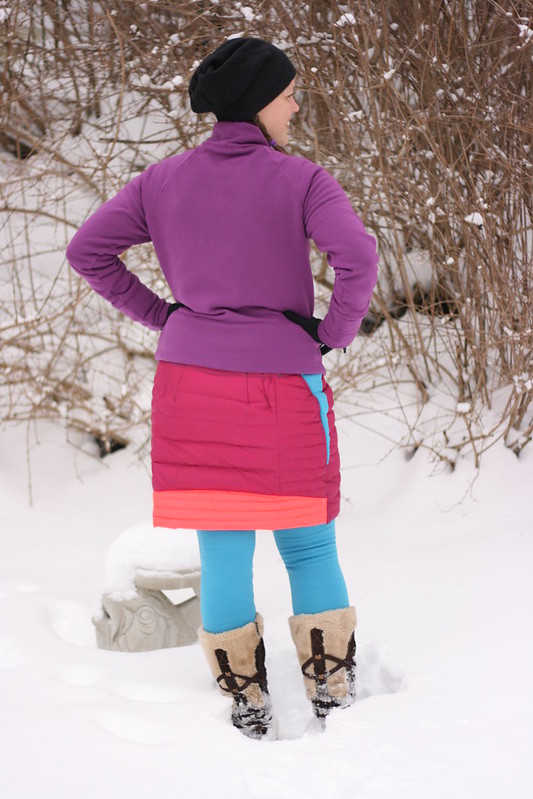 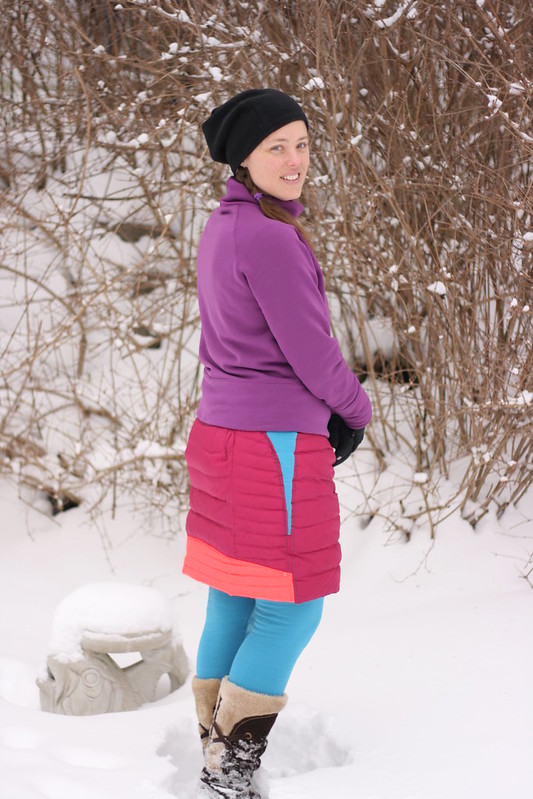 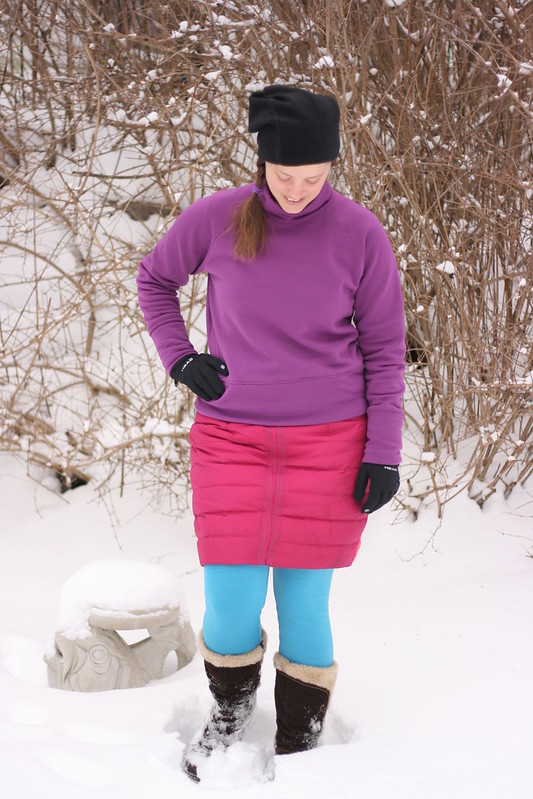 This skirt has the added benefit of a little puffy booty enhancement up top.  It’s too high for people to think you pooped in your pants, so I like to think of it as booty enhancement.  Maybe it’s because I sewed all the darts in the skirt, even though I basically negated them with those side triangles.  I needed the triangles, though because if you’re going to eliminate the zipper, you need some way to get your skirt on! 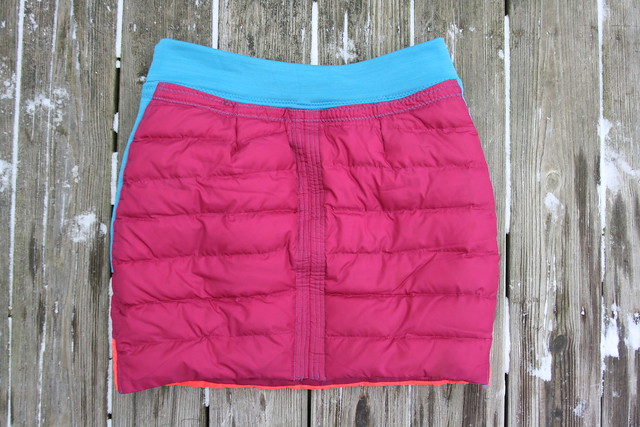 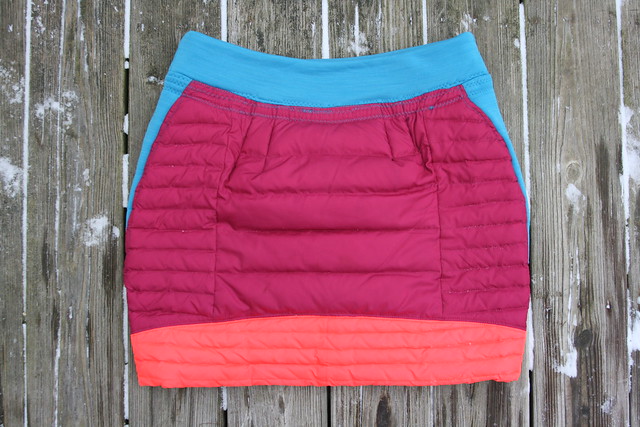 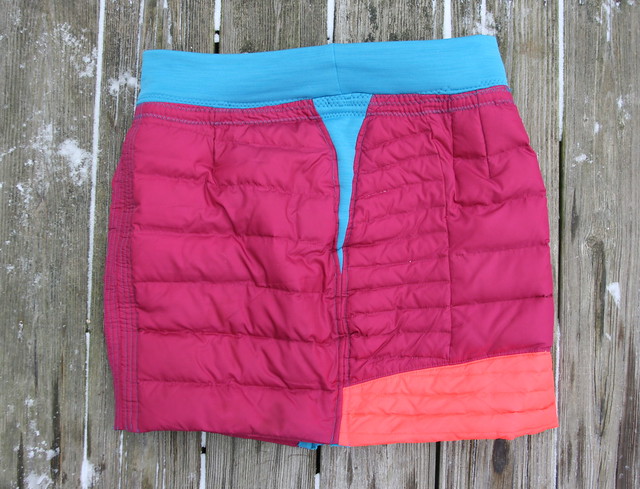 Side view (above). I folded the front of the skirt down at the top a bit because it was originally higher in the front and lower in the back, but that feels weird to me.  I want it the other way around. 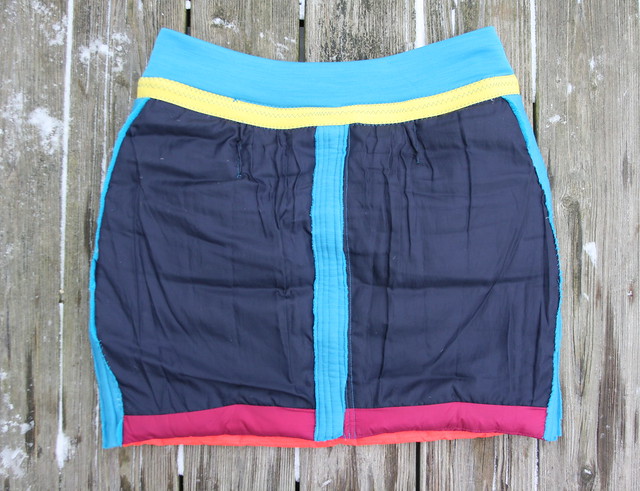 Inside front (above).  I covered my seams with fleece, but didn’t sew with a wide enough seam allowance, so I ended up sewing extra lines and hand-tacking things just to get all those feathery seams covered.  I also covered my top seams with wide fold-over-elastic (although I didn’t fold it), and used a zig-zag stitch to hold it down and allow for a little stretch at the waist.  That doesn’t look great, either, but again, you don’t really notice it that much when I’m wearing it, so whatever! 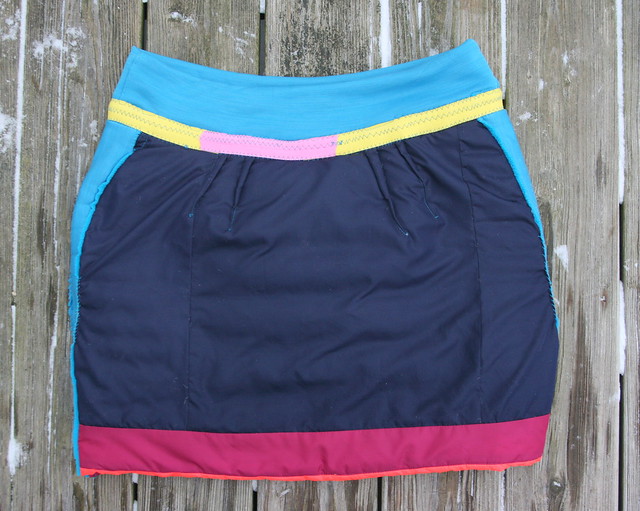 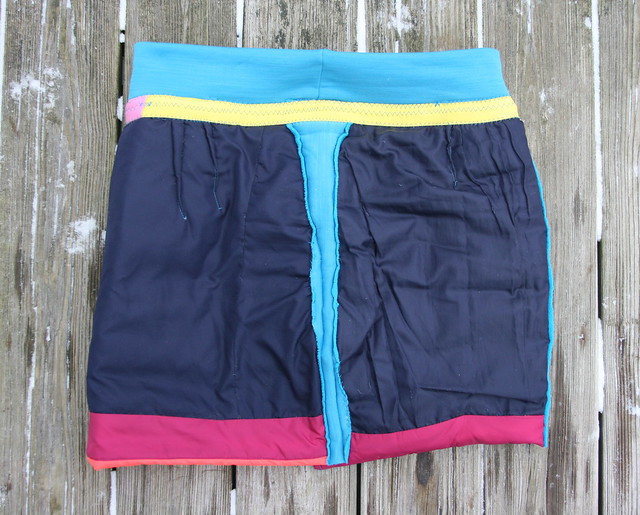 Inside side view (above).  Here’s where it started to get ugly, but I just wanted to finish at this point.  It was helpful to have the coat lining as a lining for my skirt because I could hand tack the fleece to it. 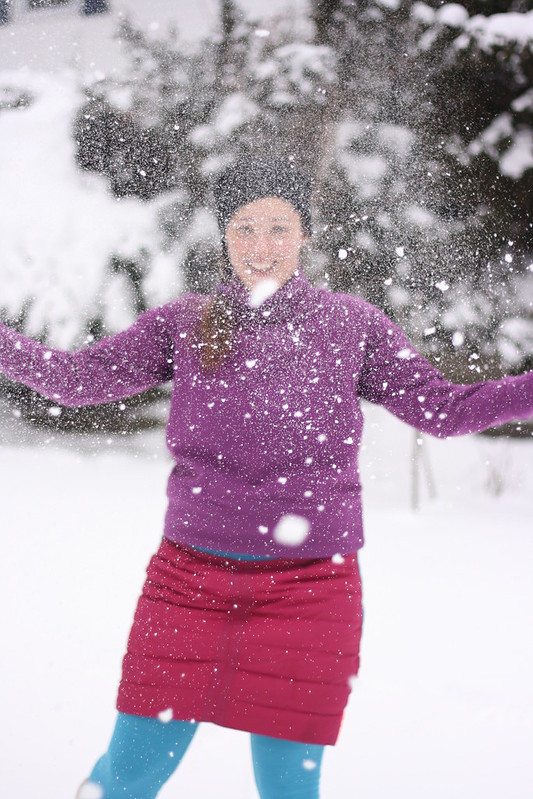 Despite any deficiencies in the finishing, I LOVE THIS SKIRT!!!!  When I wear it, I feel ready to take on winter!  The fit is great and it is so cozy that I wore it for two days straight after making it (and vacuuming my work room a.k.a. our living room…twice).  In January I made these fleece leggings and the Toaster Sweater that I’m wearing in this picture, and this outfit is pretty much winter perfection.  I love it so much.

After I finished, I contemplated making a scarf from the remnant of the jackets, but I decided to just put it away for now.  I DID NOT like sewing with all that down.  However…my husband had the brilliant idea to make a scarf from it in the summer…while sewing outside.  He’s so smart!