I am so happy to report that this flannel shirt, which was supposed to be a Christmas present in 2017, is finally finished!  It took awhile, but I’m really happy with the final result. 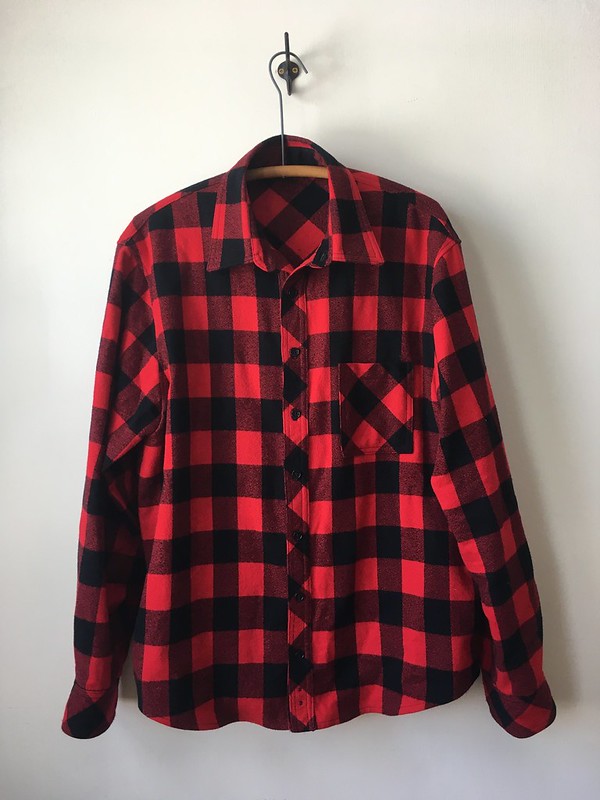 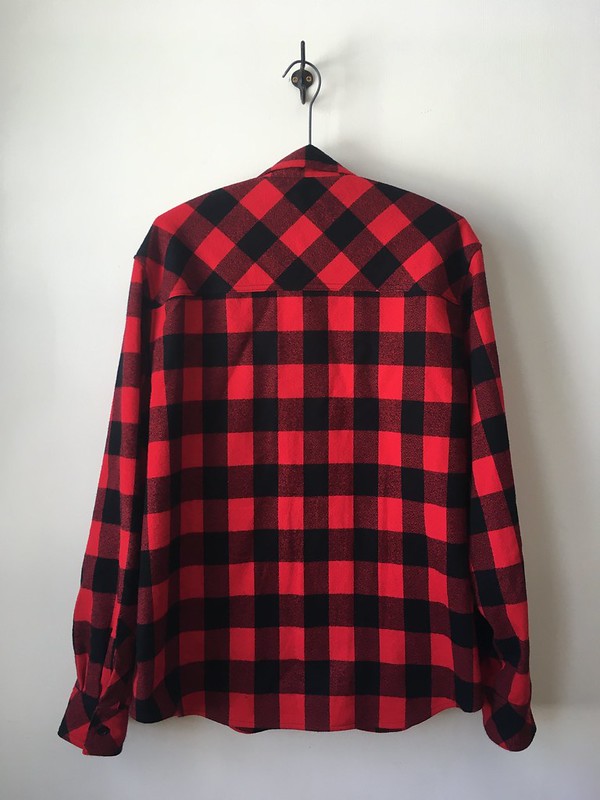 My husband picked out this buffalo plaid Mammoth Flannel by Robert Kaufman Fabrics in 2017, and we decided to pair it with the Thread Theory Fairfield Button-up Shirt.  The Fairfield is a slim-fitting dress shirt, which should have been a clue about how my initial tests would go.  What my husband wanted was a loose-fitting, casual flannel shirt.  We really like Thread Theory Patterns, which is why we tried the Fairfield, but after two muslins (test garments), it just wasn’t working out.  I made muslin #1 too big.  Muslin #2 was a great fit…for a slim-fitting dress shirt, which is exactly what that pattern is for.  What it is not is a loose and boxy casual button up.  After two muslins, I put the pattern away for a year.  I needed a break.

This past fall/winter, I decided to try again.  I bought Simplicity 1544, which is the men’s version of my own favorite button up pattern, Simplicity 1538.  I took my husband’s measurements, which put him in a size 44.  I cut out a straight 44 for him (View A without the back tab), and decided to throw caution to the wind and skip the muslin.  I really hate making muslins despite the fact that I’m always glad when I do.  After two, I just decided I was going for it and if it didn’t work out, we could find someone else to give it to.  It was time. 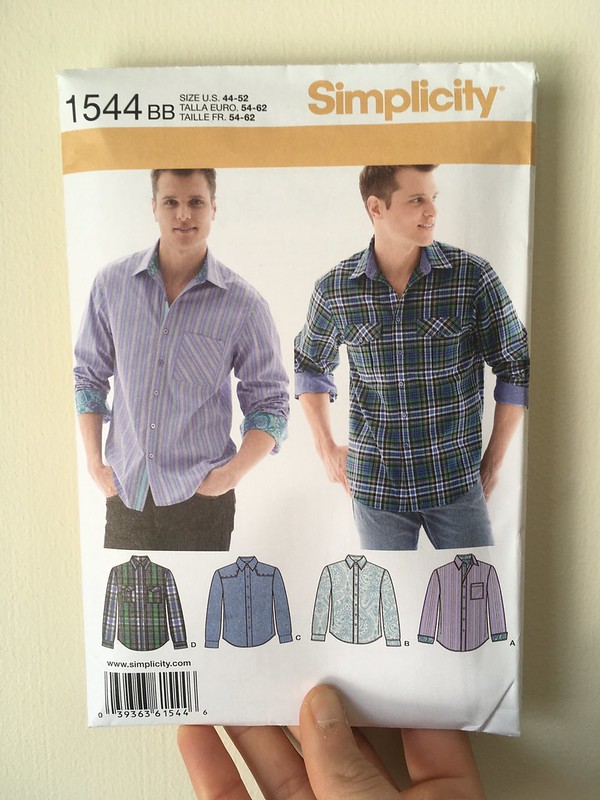 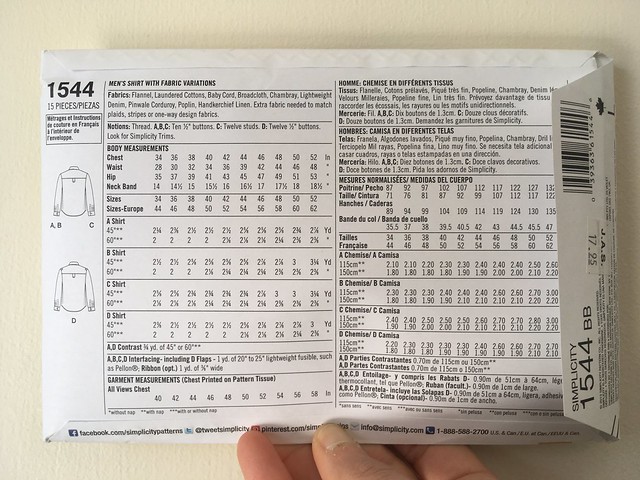 I took a lot of time and care in cutting this shirt out.  The blocks of color in this plaid are more rectangular than square, so there are some areas that I couldn’t make symmetrical, specifically the back yoke, which I put on the bias, but overall, it worked out great.

I love contrast, so I used the bias as my contrast, in a sense, putting it on the yoke, the front placket, the pocket, cuffs, and cuff placket. 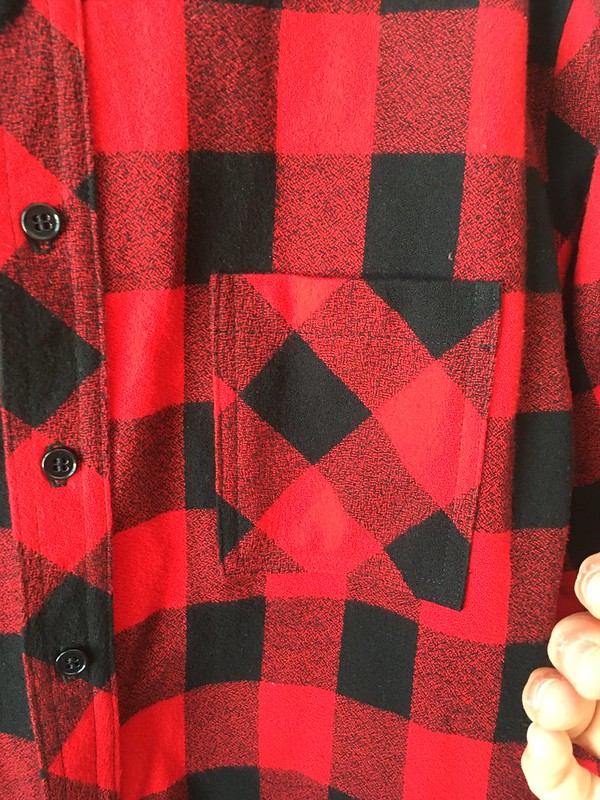 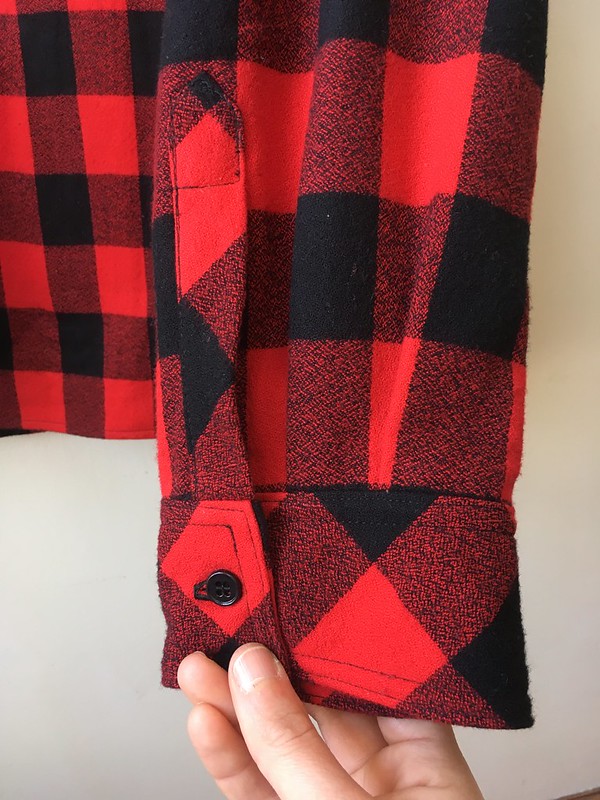 I tried to match the plaid horizontally across the front of the shirt, the back, and across the sleeves. 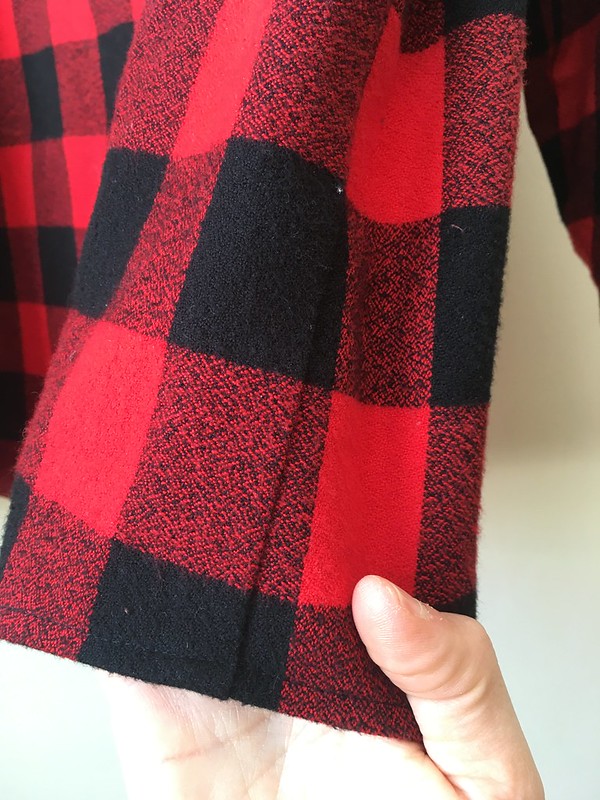 I was even careful to have the shirt’s hemmed edge fall at the bottom of a repeat (this was mostly successful). 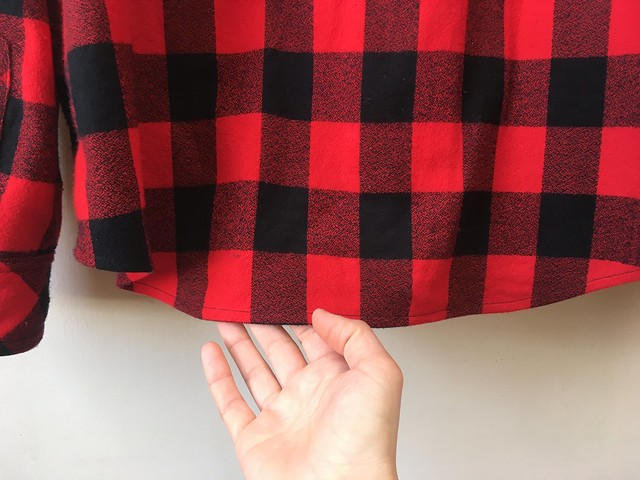 And tried to have a dividing line of the plaid down the back center of the collar and collar stand. 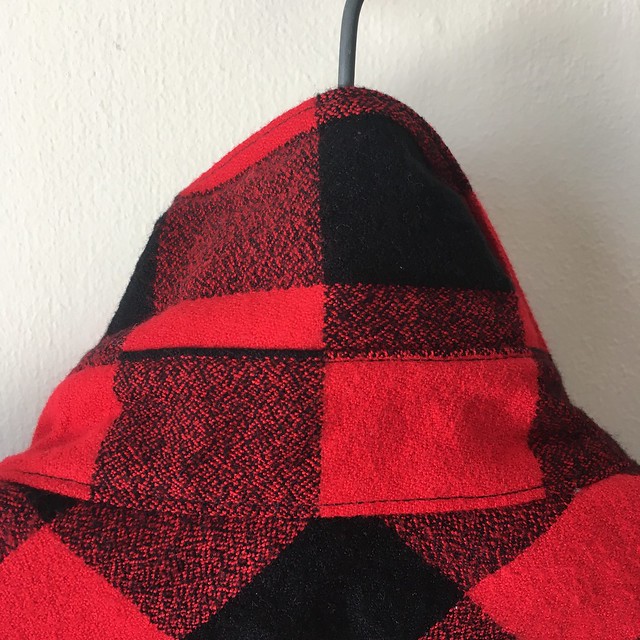 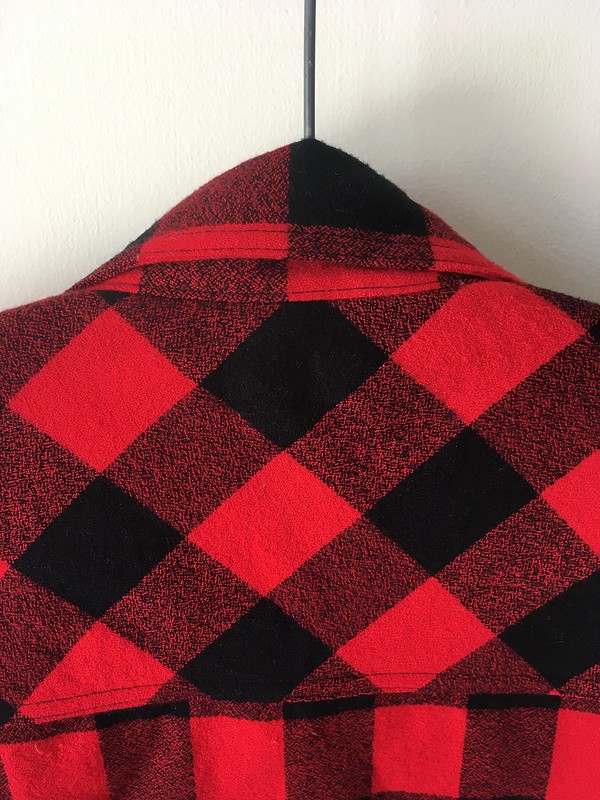 Some parts of the insides are not finished as well as I would like.  I zigzagged any seam allowances (sides and sleeves) that weren’t encased like the yoke and cuffs.  French seams would have been bulky, and I really didn’t think ahead enough to do flat-felled seams.  Luckily, my husband doesn’t care, which means I don’t either!  (Mostly.) 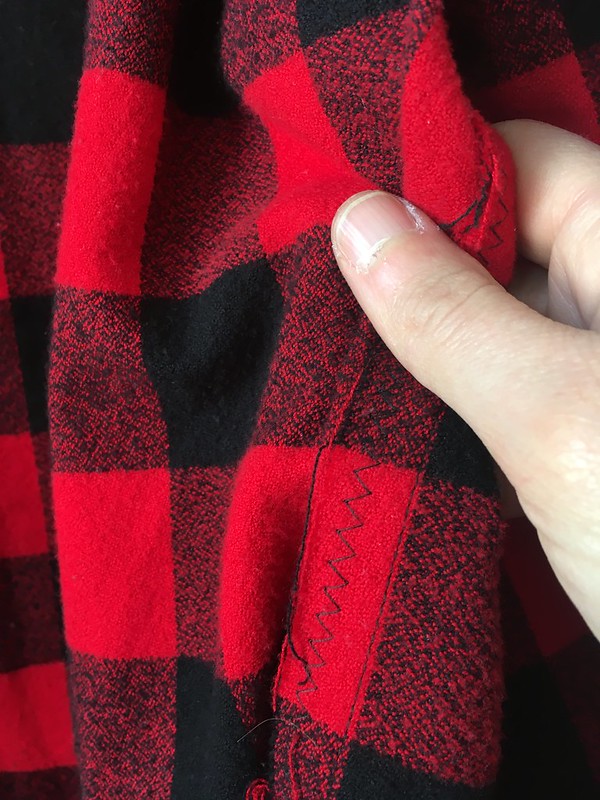 The yoke, placket, and cuffs, however, are satisfyingly finished. 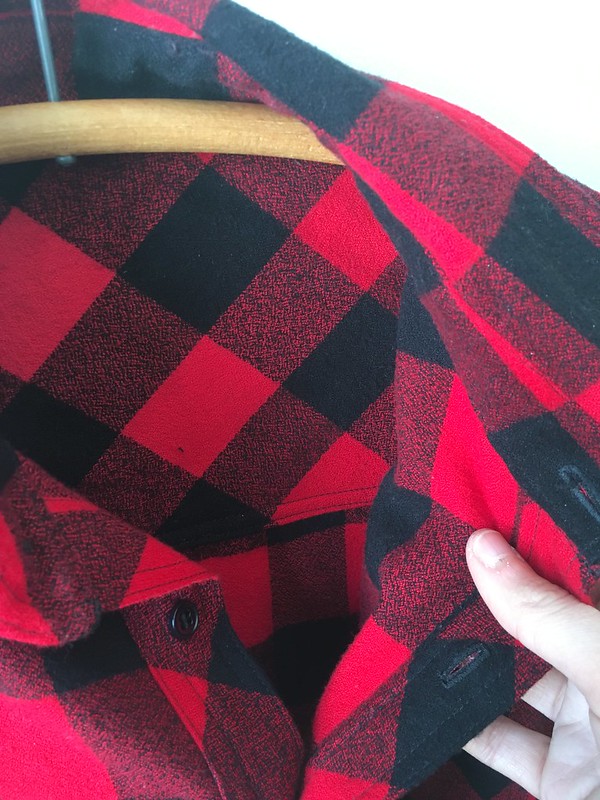 And the topstitching is a really nice detail. 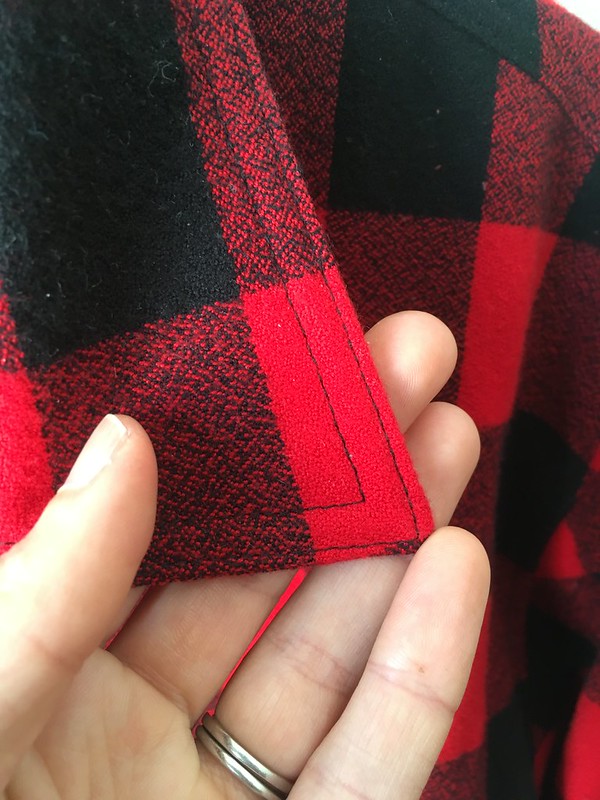 I was surprised at how much I enjoyed sewing this pattern.  I shouldn’t have been–I really like making button up shirts, but after taking such a long time to get to the sewing part of this project, I wasn’t really thinking about how I would feel while sewing.  Happily, I loved it.  The directions for this pattern are clear and well-written, and I loved seeing all my careful cutting come together is a beautifully matched shirt.  The icing on the cake was that this was exactly the fit my husband was looking for.  It’s the perfect casual flannel shirt for him.  This pattern is going to be my go-to if I make him any other casual shirts. 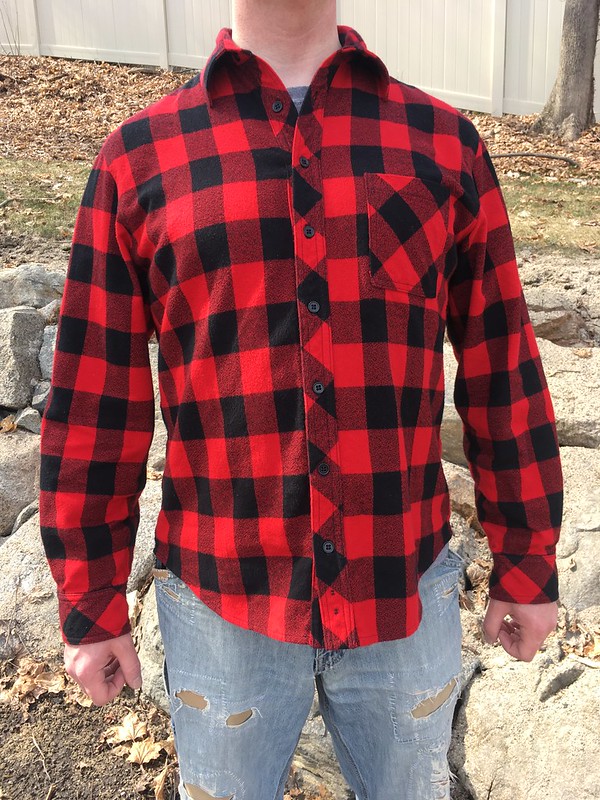 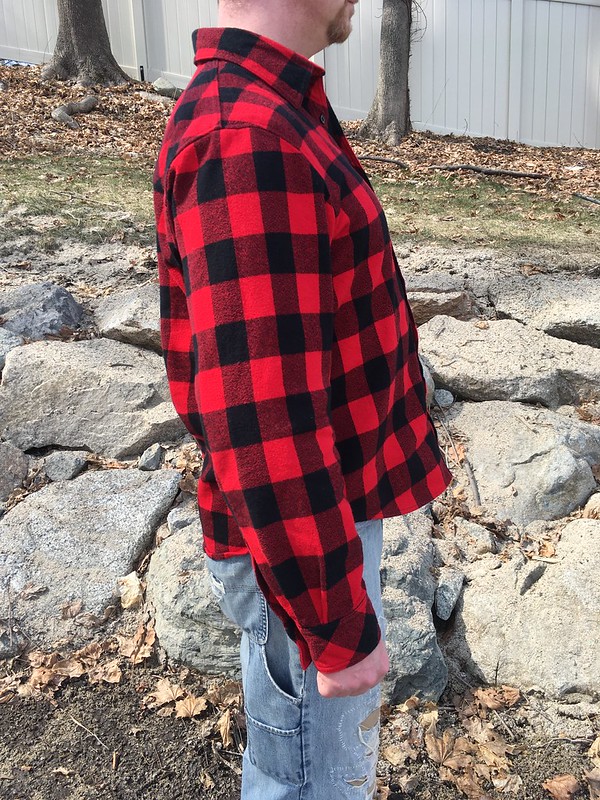 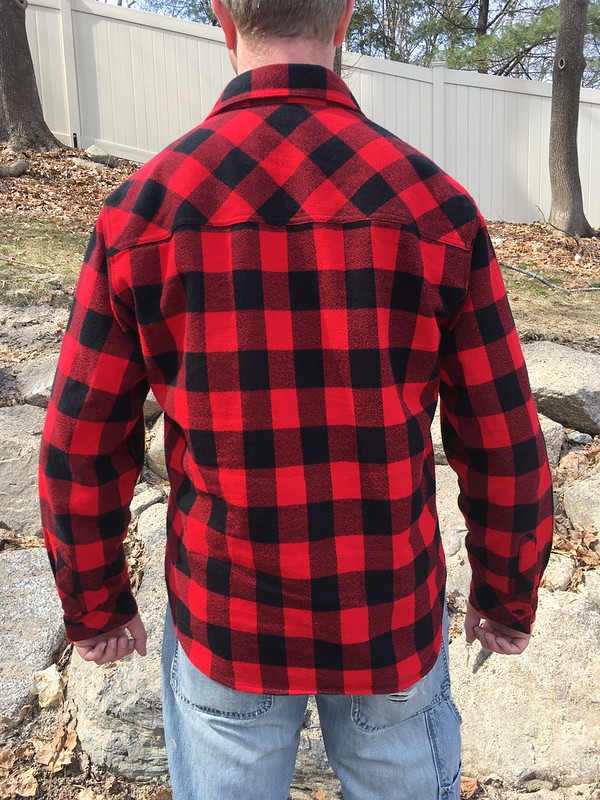 As far as the fabric, my love of Robert Kaufman’s Mammoth Flannel is pretty well documented (here’s my Mammoth flannel version of Simplicity 1538), and this is no exception.  When you buy it, it feels a little on the thin side, but as soon as you wash it, it fluffs up to be nice and substantial, with no real right or wrong side.  I like Robert Kaufman fabrics in general because there is a huge variety of substrates and styles, lots of shops carry Robert Kaufman fabric, and it’s both good quality and affordable.  This fabric and the Fairfield Shirt pattern came from Pintuck & Purl (of course) and the Simplicity pattern came from Joann’s, as did interfacing and thread.  The buttons were given to me by a friend.  They are basic black buttons, but are a perfect match.  I made sure to put a few on the inside of the placket in case any of the main ones fall off. 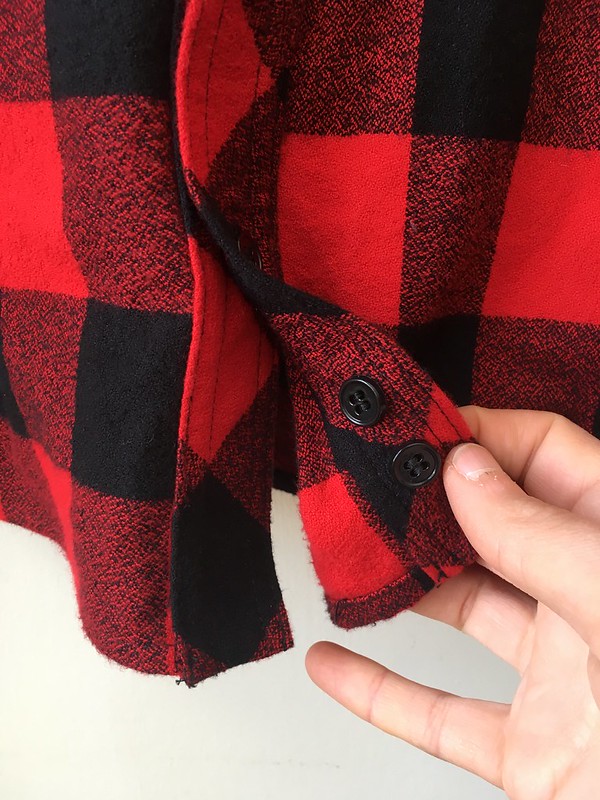 So that’s it!  Despite being finished toward the end of winter, this shirt has gotten a lot of wear.  I love how it looks on my husband, and I think he likes it too.  🙂 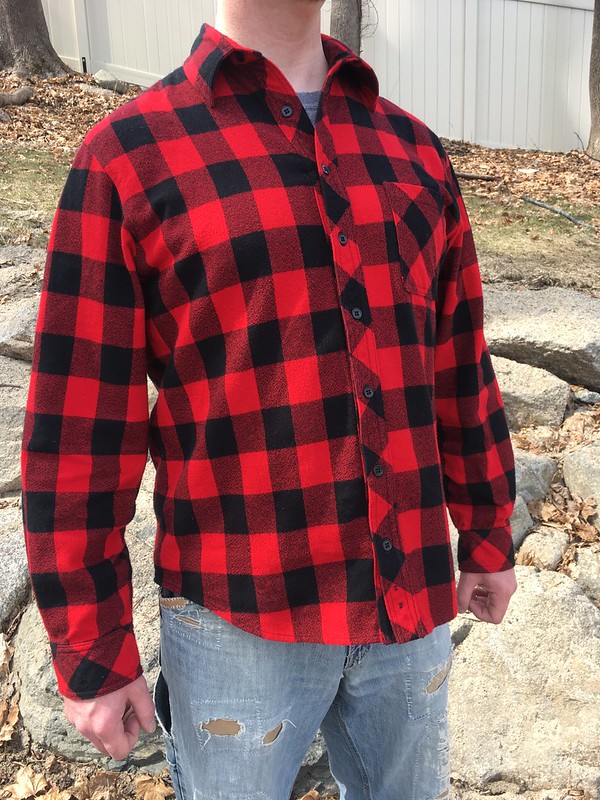