I have ventured into most areas of clothes making. Socks are one area I don’t visit a lot. I made a few pairs back in my first knitting phase, and I have sewn socks, but since picking knitting back up, I have more or less avoided socks. Rather than making one thing, I would have to make a pair. I wasn’t too sure I wanted to or that I would have the will to make both socks.

After I got a few sweaters under my belt, though, I realized that if I can knit two sleeves, I can definitely knit two socks. They are typically even smaller than sleeves! I was also inspired by my Mom, who is one of my knitting buddies, and who has gotten really good at socks. I needed to give this a try.

Last year my Mom and I decided to knit the Drea Renee Knits Sparks socks pattern at the same time.

This is a stranded colorwork sock pattern with two colors. We’re both big fans of Drea Renee Knits patterns, and stranded colorwork is my favorite type of knitting so far. I had some Hedgehog Fibres sock yarn from when I first discovered their yarn (and speckled, hand-dyed yarn in general) that I wanted to use. There was a white mini skein with speckles of green, blue, pink, and purple in it that I used at the top of my socks, and a larger white skein with pink, purple, and black speckles that I used for the rest of the sock. That skein was actually reclaimed from a cowl that I frogged (ripped out). I can’t find the colorway name of the mini skein, but the larger skein was called “Cheeky”. I paired these with some Cascade Heritage yarn (colorway: “Real Black“) from Wool & Co. because I love that high contrast. All yarn was superwash wool combined with nylon for strength. The Hedgehog Fibres Yarn originally came from Pintuck & Purl.

Making the socks was fun, and I learned a lot. The design is cool and interesting, and the heels and toes look pretty. I really like all the tips and support designer Andrea Mowry puts into her patterns because there are a lot of things to know in knitting, and those tips and YouTube videos make it easy to learn as you go, no matter your level.

In making these particular socks, I made a few…mistakes? Accidental design choices? I don’t know. I’m a loose knitter, so I sized down to some tiny needles (US 1 and US 0), but nevertheless, my socks came out a little too large…definitely too large to wear out and about every day. No matter. They could be sleep socks. I usually wear socks when I go to bed and then, as my feet warm up, I kick them off. Their looseness made them perfect for this.

The other thing I did was accidentally reverse the colors on the second sock. It’s hard to remember what I was thinking because it looks like I redrew the color chart like I usually do so that I wouldn’t get mixed up, but somewhere along the line, I spaced out, and they are opposites. When I realized what I had done, I had to laugh. There are definitely socks out there that are made this way on purpose, and they look cool, but this was 100% a mistake on my part. Haha.

Since they are superwash and already too big, I have thrown them in the washer and laid them out to dry, and they have done great. I think they may have even accidentally gone through the dryer once or twice. They are pretty pilly at this point, but that’s easy to fix. They’re holding up great.

My second pair of socks were the DRK Everyday Socks.

I used these as a sort of slow-and-steady, easy project since a lot of the pattern is knit 2, purl 2 ribbing. They were the project I brought along when I was listening to a speaker or knitting in front of the TV or in the car, and I worked on them slowly little by little over several months.

Come to think of it, I have done a lot of knit 2, purl 2 ribbing over the last year across three different projects and I discovered a few things.

1. I like doing this kind of repetitive ribbing best when knitting Continental rather than English style.

2. I also find it a lot more fun if I am using an interesting (rather than a plain) yarn.

Two of my three ribbing-filled projects have used a plain yarn, but these socks were more fun because I was using this great speckled sock yarn (colorway: “Pixie on a Bender“) from Birch Dyeworks for most of it. For the rest, I used a mini skein that I had which was also from Birch Dyeworks (colorway: “Mom’s Hot Pants“). The speckled skein, which is a white and pink base filled with pink, green, black, purple, yellow, blue, and even the occasional trace of orange was a gift from Maggie at Pintuck & Purl. Back when I used to work there we made plans to knit socks together so I could learn two-at-a-time Magic Loop*, where you knit two socks at once. Well…we didn’t get beyond about an inch and a half and the two-at-a-time technique never cemented itself in my brain. Even though those socks never materialized, I got to keep the yarn, and have always wanted to put it to good use. And those speckles really kept it fun.

My knitting was tighter on these socks, which I was happy about, so they are only slightly loose, and work great as everyday socks in general. I have worn them a few times, and I’m not sure yet if I like them as much as store-bought socks or not. When I first put them on, I can feel the texture of the sock under the front part of my foot, and I don’t love it. As I go along, I stop noticing it, but the jury is still out on whether or not I love handmade socks for everyday wear. I do love them on cold days with slippers, though!

This pattern was fun, I learned some interesting new things, and while I like the look of the Afterthought Heel in the Sparks socks better, both were great to knit. I like being able to have contrasting toes, heels, and cuffs, and both patterns allow for that in different ways.

It was also interesting to see what a dramatic difference blocking made in the look of the finished socks. Even though they are not at all necessary, I bought some Bryspun sock blockers by Bryson from Pintuck & Purl before finishing these. You can get a sense of how the socks looked before blocking in this picture of them soaking.

After knitting both of these, I feel like I have a good handle on using Magic Loop to knit one sock at a time. *If you haven’t heard of it, Magic Loop is a technique wherein you use a long circular knitting needle to knit smaller-circumference things in the round rather than using double pointed needles (DPNs). I’m fine with double pointed needles, but I am really glad I learned to knit this way too. I never really thought I would like it better than using DPNs, but I think I may be starting to.

Now that my DRK Everyday Socks are done, I’m trying to finish up a cowl I started in a class I took as well as a sweater. After that? Probably some Speedy Selbu mittens…just time time for Spring! Haha.

Today’s project has been a long time in the  making.  And the inspiration for it comes totally and completely from an amazing seamstress on the other side of the world:  meggipeg. 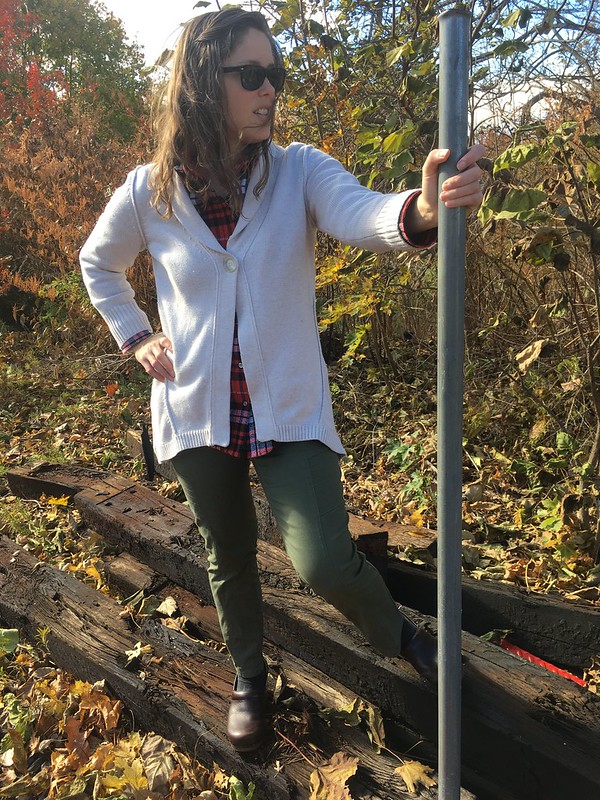 Ever since I saw her version of a pair of Balmain jeans made from the Jamie jeans pattern by Named, I wanted my own.  But, like a lot of projects that I knew were going to take some work, I had to psych myself up.  I didn’t own the Jamie Jeans pattern and, like most indie patterns, it wasn’t cheap.  I kept thinking about it, and almost committed to buying the pattern before realizing that with just a little more work, I could use a pattern that I already had.  And then came the perfect impetus to get going on making my dream a reality:  I had signed up for a class.  And not just any class, but a choose-your-own-sewing-adventure kind of class where you pick what you want to work on.  The time was now. 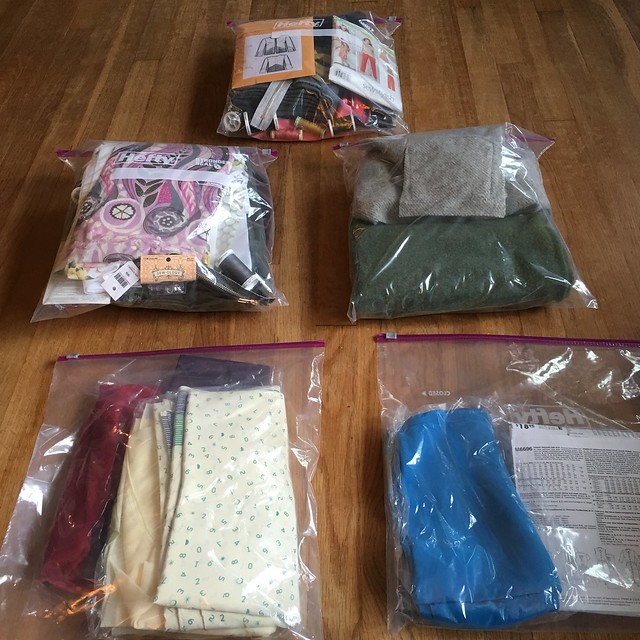 All my class projects ready to go!

I had verbally signed up for Lauren Taylor’s (a.k.a. Lladybird’s) Sewing Master Class at Pintuck & Purl way back in May, when I first heard about it.  I love seeing all the things that Lauren sews, and I knew it would be a great opportunity to work on some projects that I found intimidating.  So, along with a few other projects, I came up with my pants scheme.  It was time to finally make some super-cool pants a la meggipeg and Balmain of my own.

However…I didn’t love the idea of figuring out how to fit a new jeans pattern, especially when I also had so many other project supplies to buy, and that’s when I realized:  I could use the Ginger Jeans pattern.  All I needed to do beyond what I was already going to do was change the front pocket and add front leg seams.  I don’t hack patterns much.  But this seemed worth the time investment.  In addition to the aforementioned changes, I drew up some parallelograms for the sides of the front legs and divided up the back pocket. 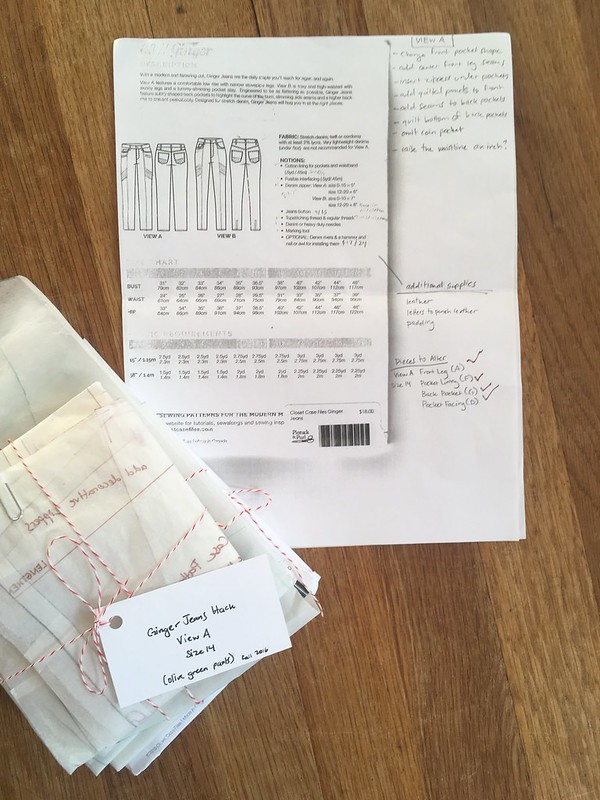 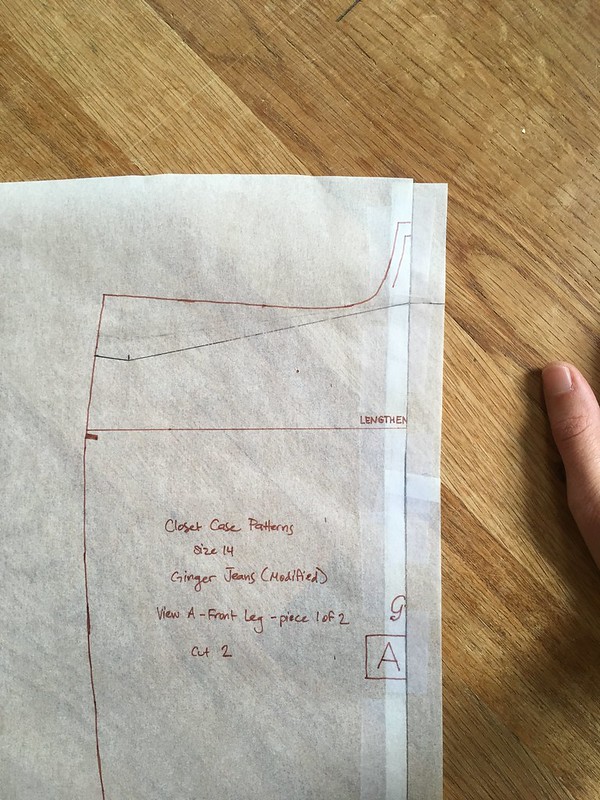 Adding a seam to the front leg. 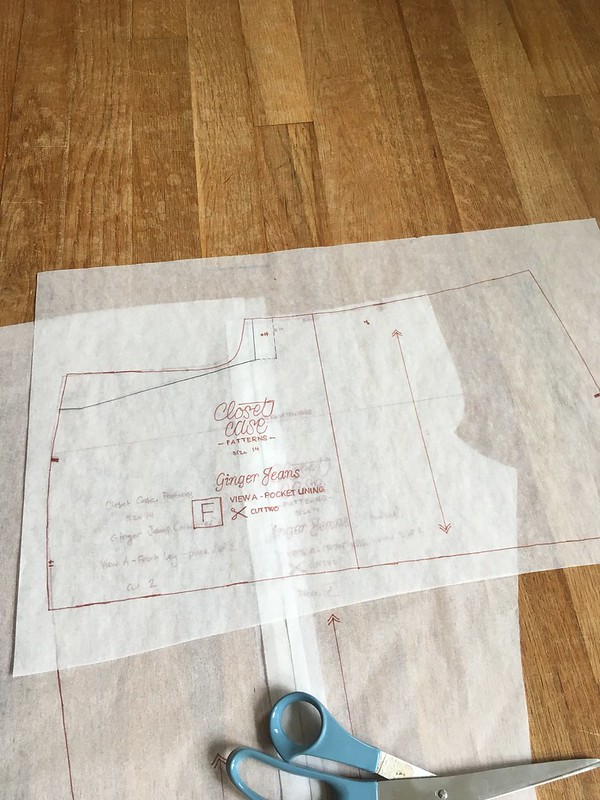 I had plans to add zippers to the front of my jeans as well, similar to Papercut Patterns’ Starboard Jeans, but these didn’t make it into the final pants (because I forgot to put them in before doing the pockets).  Oh, well!  I also contemplated zippers at the bottom of the jeans, but decided against those before beginning. 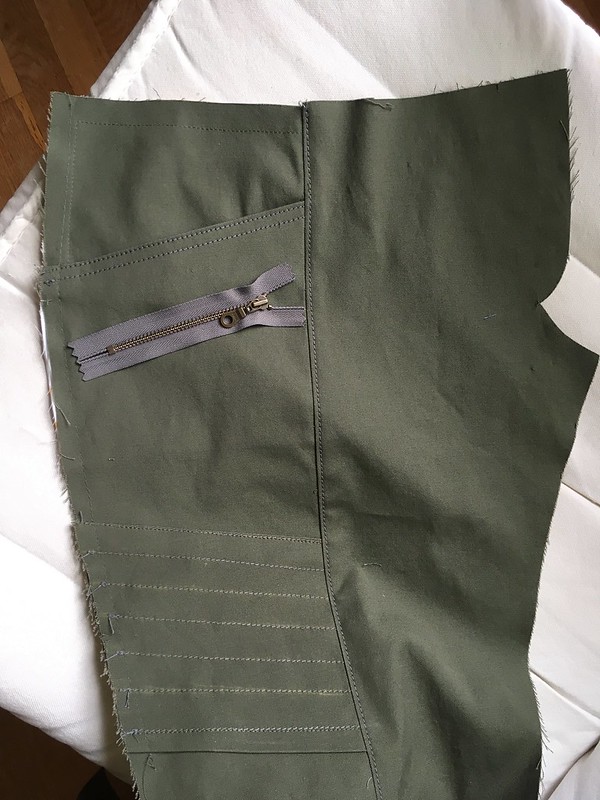 Ooops!  I forgot the zippers!

I didn’t get a lot done on these in the class, because this was the third of my several projects (not all of which will show up on the blog–sorry), but preparing for the class forced me to make the necessary pattern changes beforehand.  It got me going on the pants and I managed to cut out the pattern and get started during class. 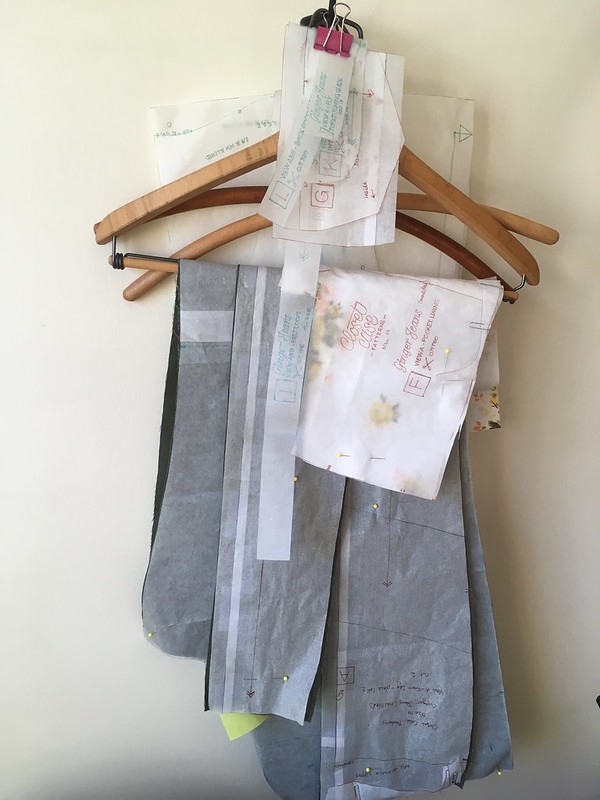 Just in case you’re wondering about supplies, I’d love to share.  Here’s where everything came from: 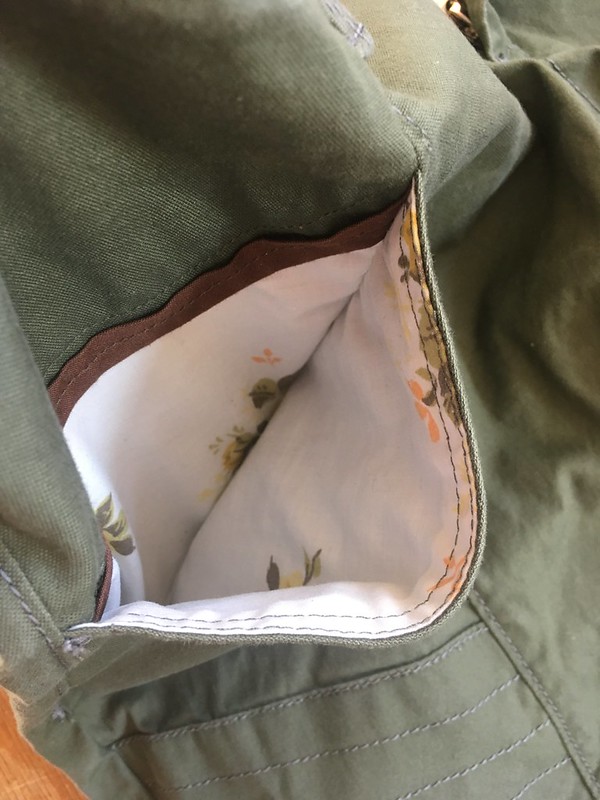 I love this vintage sheet as pocket material! 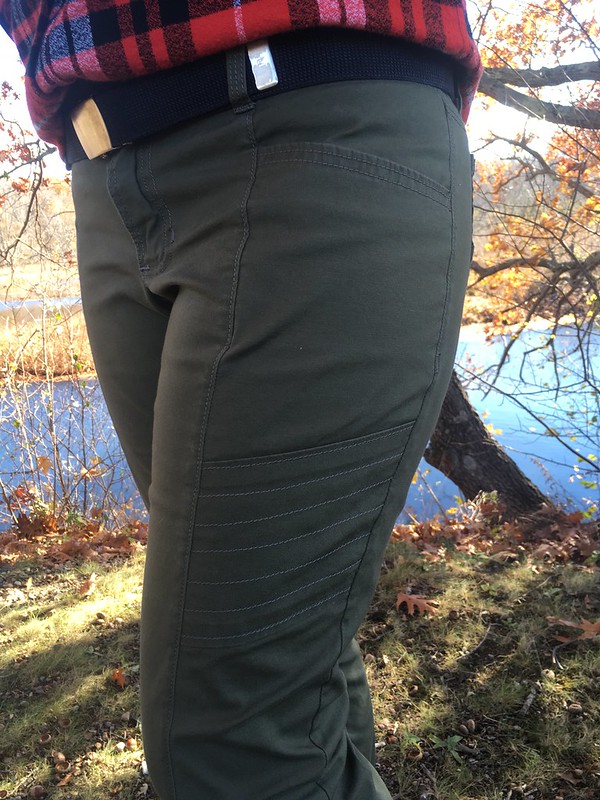 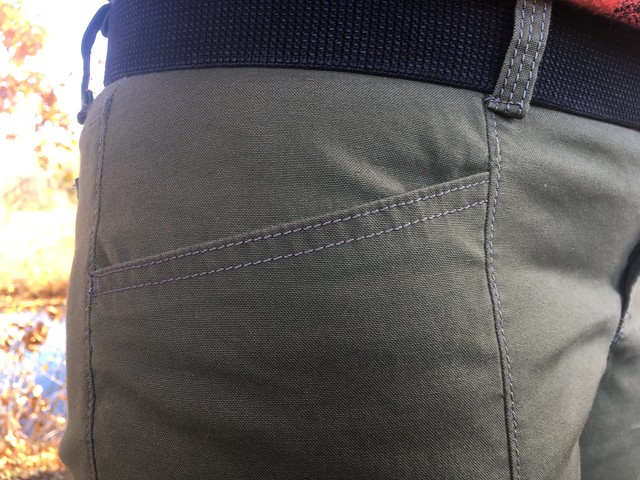 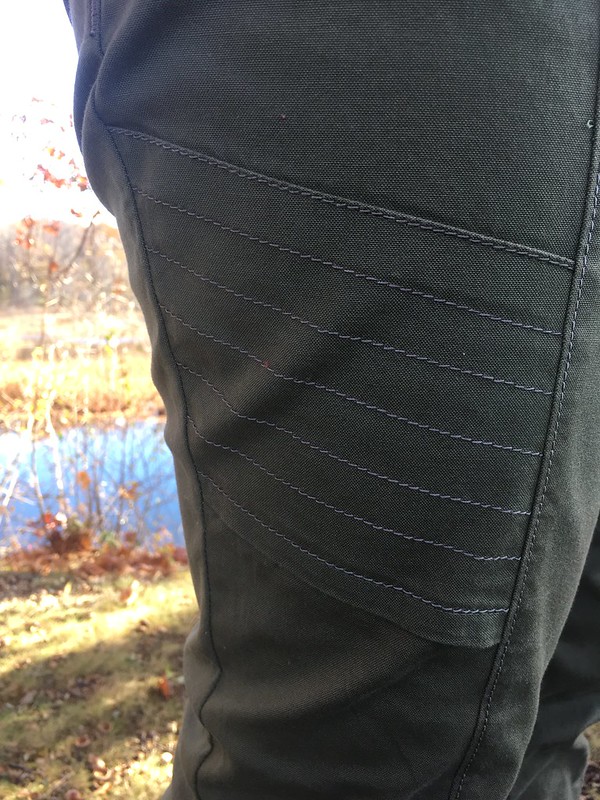 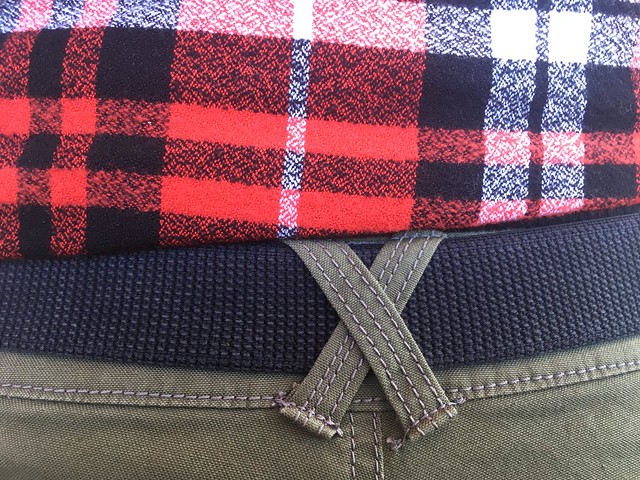 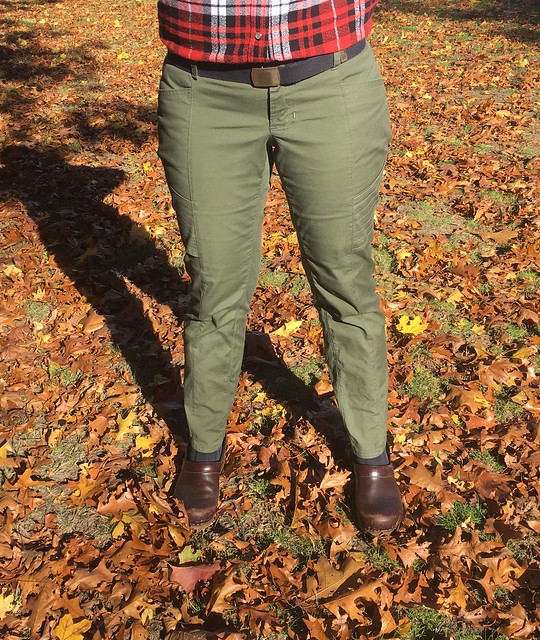 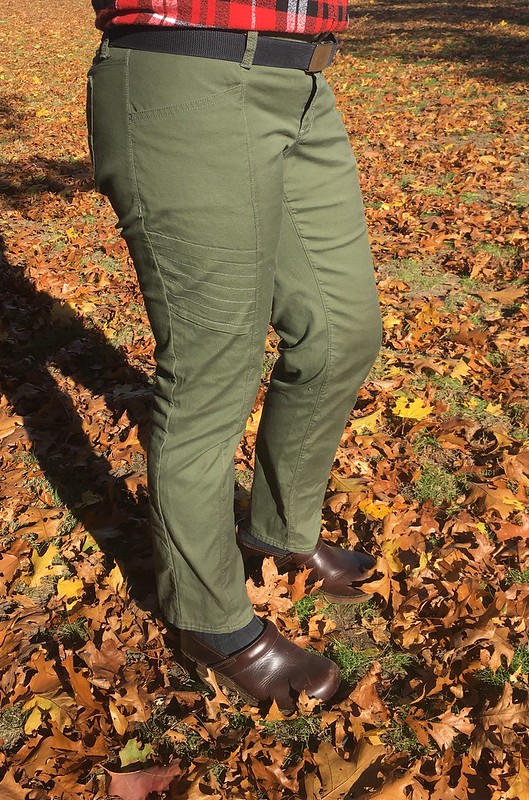 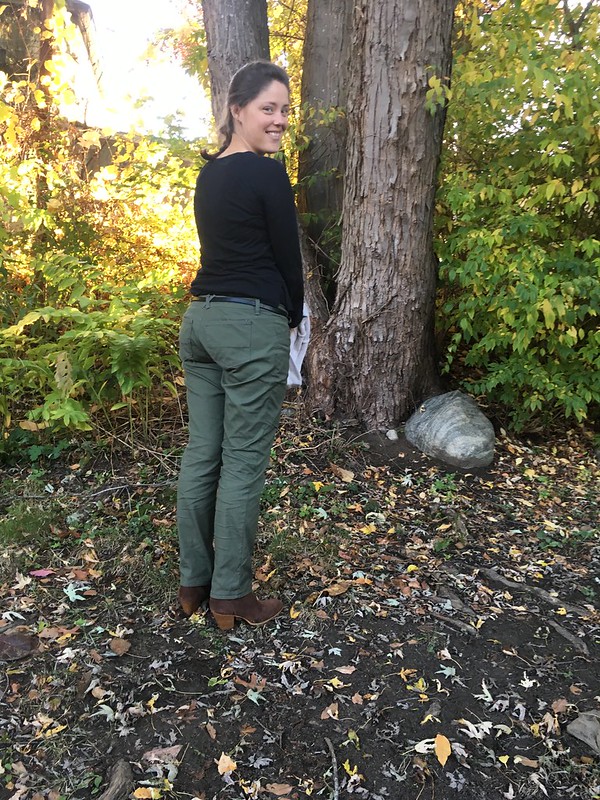 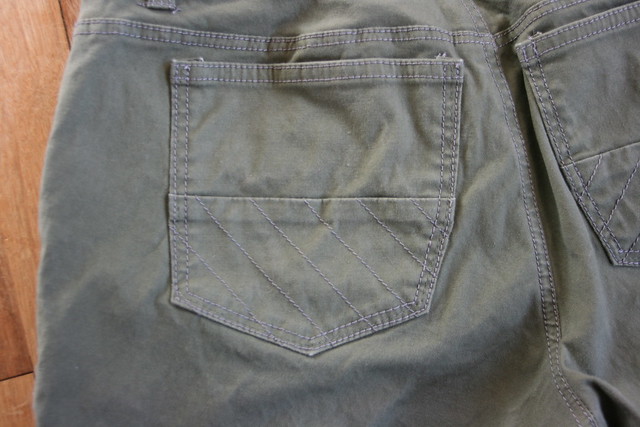 The pants themselves?  I LOVE them!!!!!  So far I’ve worn them about five days out of the last two weeks.  Yep!  I hope I’m not the only one that calculates how many people I’ll see more than once in a week so I can rewear outfits!  But even if I am–oh, well!

I love these pants so much.  The ease is great, the fit is great, the stretch is great, and the fabric is great.  It was definitely worth the effort to make these.  Thanks for the idea, meggipeg!  I hope you take my emulation of you as a compliment.  I’m always impressed with your style. 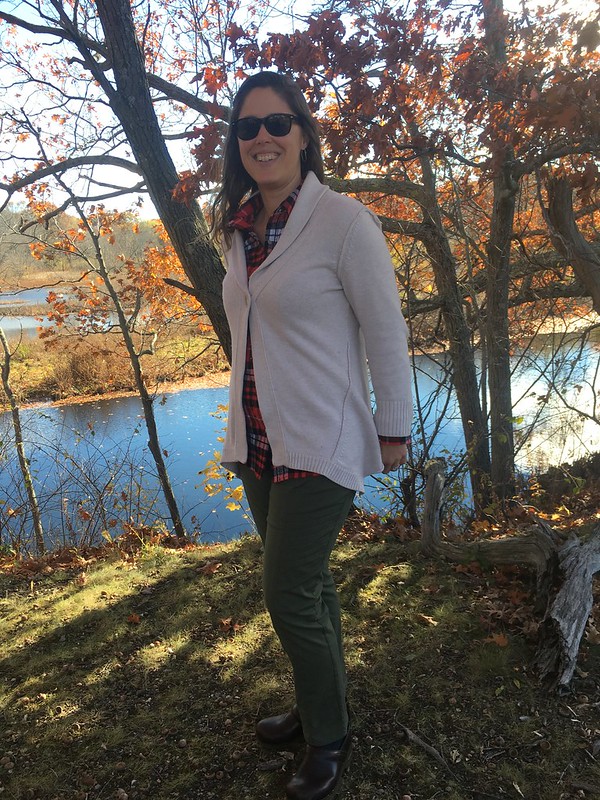 I even made a flannel shirt to go with it!  Stay tuned for more details on that…