Hey! We’re finally into the spring sewing! Granted, I have lots of smaller crafts and knitted items that remain unblogged, but that’s ok. On to spring! This is actually the only garment I have sewn for spring because I’m hard at work on my Spring Outfit! More on that in a future post.

This sweatshirt is made of the softest Tencel sweatshirt fleece EVER.

I found it at Pintuck & Purl last year, and I bought the last of it. Kali, who works there, even let me buy the little bit she had been saving for herself so I would have enough for my project (thanks, Kali!). I’ve been curious about Tencel, which is a semi-synthetic (like modal, rayon, or lyocell), but which is made with an earth-friendly process by the company Lenzing. I have a thrifted shirt in Tencel, which is drapey like any rayon challis might be, but this sweatshirt knit was a different ballgame. It is drapey, substantial, not overly heavy, so soft, and stretchy.

I got the idea in my head that I wanted to make this fabric into a Brunswick Pullover, a pattern by Hey June Handmade, with a curved hem like that of the Style Arc Josie Hoody.

I have made both of these patterns before (Brunswick and Josie), and they are two of my very favorite sweatshirts. I’m actually wearing my Josie Hoody as I type this. After checking, I had just barely enough fabric if I chose View A with the hood rather than the cowl neck. The only issue is that the Brunswick is made for heavier weight, lower stretch knits–actually for two-way stretch knits. None of these things describe this black sweatshirt knit. However, Adrianna, the pattern designer, helpfully included fitting notes for anyone who, like me, veered off-script.

Per her instructions, I sized down from my measurements (which put me at a 20 bust and 22 hip) to the 16 bust and 18 hip I had used previously. It was so helpful that I could try on the Brunswick I already had, which is still a good fit at those sizes. I also took 1/2″ off the bottom sides of the sleeves and 1″ off the width of the cuffs as suggested. Then I added the Josie Hoody hem shape at the bottom of front and back, knowing I might have to work out some issues when I got to the plackets and hem facings.

For my arm pocket, I cut into one of the two precious fat quarters of Liberty lawn that I own and underlined it by fusing some black silk crepe de chine to it. Fancy! The fusing made things a little on the stiff side, but it was fine in the end, especially after a few wears. I’ve used lawn for pocket bags in pants before and, let me tell you, it is not a good idea. It’s just not durable enough for that kind of wear and tear. This pocket wouldn’t have as much stress on it, but I didn’t like even the smallest possibility of it wearing through in the future, so underlining it was! I didn’t worry about the lawn on the plackets. They’re interfaced where necessary and don’t come under much strain.

Things went along pretty well, even at the spot where the plackets joined my modified hems and when I installed grommets for my hood strings.

The one part I wish I had done differently/better is where the sides of the hood meet in the front. The instructions tell you not to overlap the pieces, but I wonder if I understood it incorrectly. I think they should overlap in the seam allowance and just *kiss* at the seam line (at least in this lighter weight knit). Mine have a gap, so there was probably some user error in there, since Hey June’s instructions have so far proved impeccable.

I love how this sweatshirt came out. It was worth the crazy hassle to find notions that were color coordinated (why is this so hard?!) and the extra steps to modify the pattern. There is, however, one thing I should have thought about before, but completely missed. It’s not a deal breaker, but here it is. Using a shaped hem with facings actually shortens the sweatshirt from its intended length. The original pattern has you cut the front and back and add a separate piece for the bottom cuff, which adds some length. I didn’t think about that one bit until I put it on at the end. I’m cool with the length it ended up, but if I could travel back in my time machine, I would add the extra length into the body of the sweatshirt.

Otherwise, I like it. It has a different feel from a low-stretch sweatshirt. It is drapey, stretchy, and has a pleasant weight that isn’t overpowering. I’ve been wearing it a lot, and it’s only increased my love for these patterns and fabric.

It’s taken so long for this project to make it to the blog, but here it is:  the Style Arc Josie Hoody/Hoodie in pink Polartec Power Stretch.  (I’m not quite sure how to spell the “hoody” part of the name since my printed copy spells it with a “y” and the PDF on the Style Arc website is spelled with an “ie”.  Either way, it’s the same pattern.) 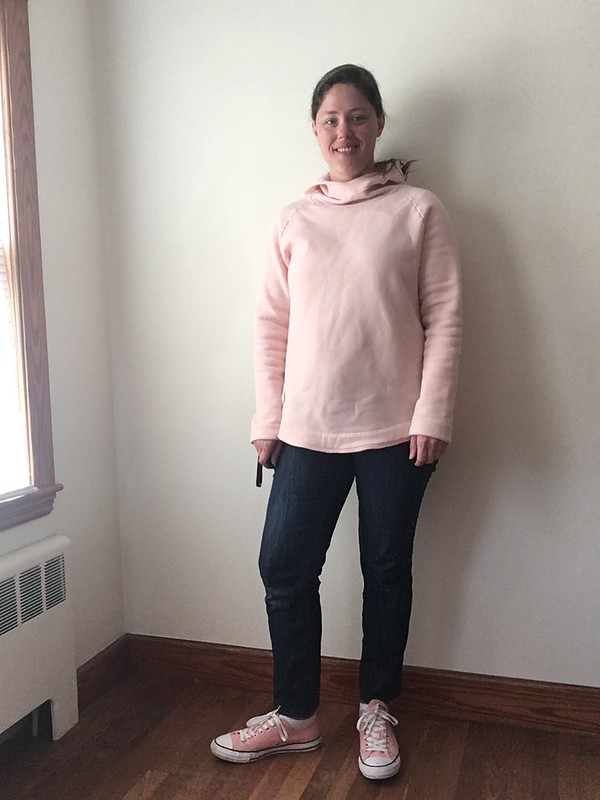 This sweatshirt is the ultimate in coziness, and a big part of that is fabric choice.  The pattern and fabric were birthday presents from my kids, and I’m so happy that they got them for me.  I fell in love with this pattern when I saw Devon Iott’s version (@missmake on Instagram), and after sleuthing around the internet looking at different iterations, I put it on my wishlist.  Did you know you can buy printed versions of some of Style Arc’s patterns on Amazon?  They come printed on nice, sturdy paper. 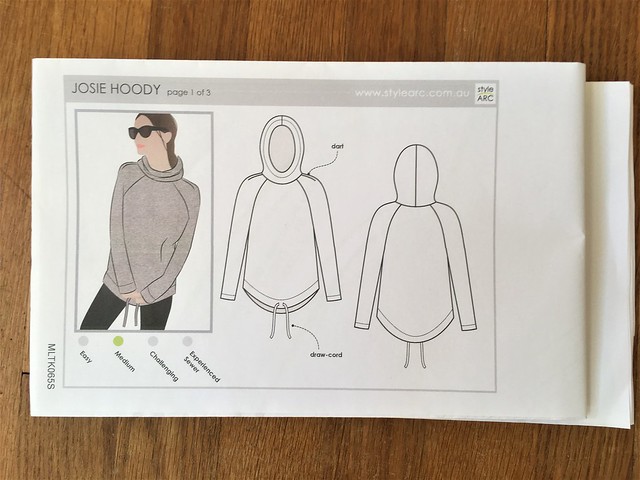 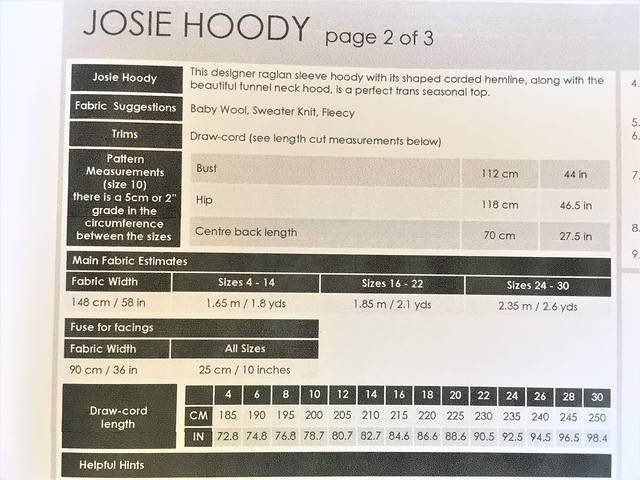 The fabric is Polartec Power Stretch from Mill Yardage.  For the last few years I have gotten Polartec/Malden Mills brand fleece either at Field’s Fabrics in Kalamazoo, MI or millyardage.com.  When I order from Mill Yardage, I often look at the seconds because, although Polartec has marked them as lower quality, whatever defect they have isn’t obvious, which means great fabric at a lower price.  After trying Power Stretch one year, I fell in love with it for its soft, stretchy fluffiness, which makes it so comfortable.  I thought this color and type of fabric would make a great Josie Hoody.  The only downside is that it can get dirty a little more quickly than a darker color, especially around the cuffs.  So far, any dirt has come out in the wash, though. 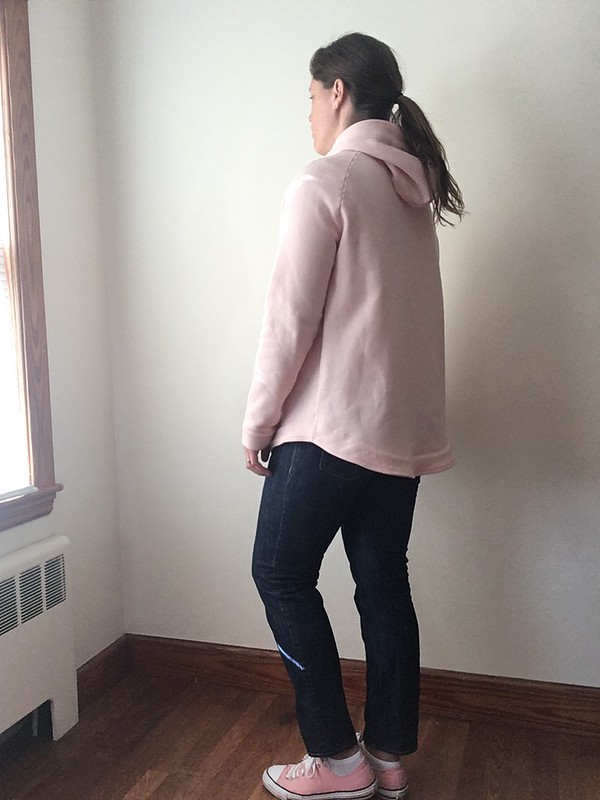 When sewing the pattern, I thought I would be really smart and lengthen it and add some pockets.  I wanted to make sure the sweatshirt covered my backside because I had visions of myself wearing this and leggings, all snuggled up inside on a snowy day or going over to a friend’s house for coffee some cold morning dressed in my sporty sweatshirt.  Some of the versions I had seen online were made by people shorter than me, and the fit looked great.  I’m 5′ 8.5″, and I wanted to be fully covered.  I added 4″ to the length, and then I saw a sweatshirt my sister had with pockets!  That seemed brilliant.  Tilly and the Buttons had a free pocket pattern with a little tutorial for adding them and I thought, “I hardly ever hack patterns.  It’s time to up my game a bit and at least start adding pockets to everything.  This will be great.”

The length turned the cool sweatshirt into a sweatshirt dress that didn’t really look cool.  And the pockets gaped, turning my not very cool sweatshirt dress into a cocoon dress (i.e. big hips when that wasn’t what I was going for).  Yikes!  I was down to only scraps of Polartec, so I had to be careful and seam rip the hem facing so I could save it, remove the pockets, sew up the side seams, and cut off the extra length before reapplying the hem facing.  Luckily, all my “super cool pattern hacks” proved to be reversible and, amazingly, the pattern was just great as originally drafted.  Imagine that!  😉 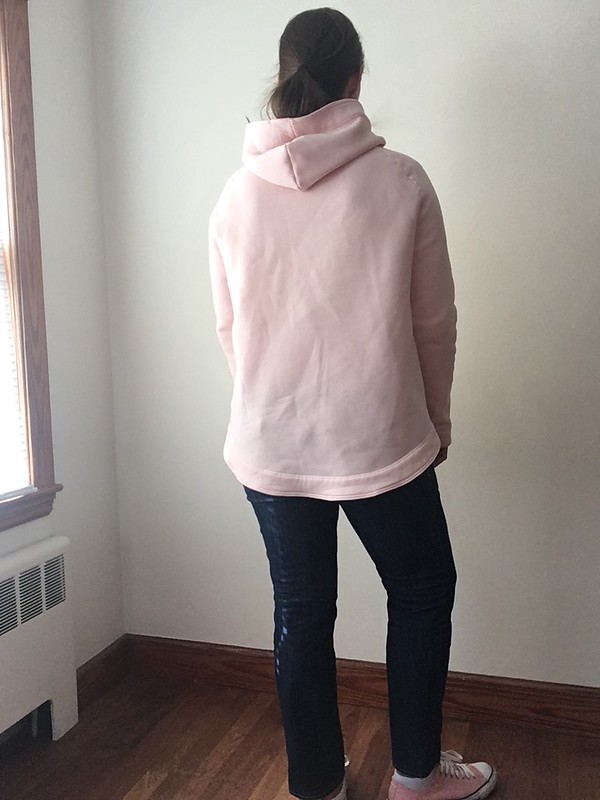 Although I tend to prefer zip-up sweatshirts to over-the-head sweatshirts, this quickly became a favorite.  I love the light color, the feel and squishiness of the fabric, and the style of the pattern.  I did take a little off the top of the hood so that it would fit better, but in a drapier fabric, I might leave it so that the hood stays nice and deep. 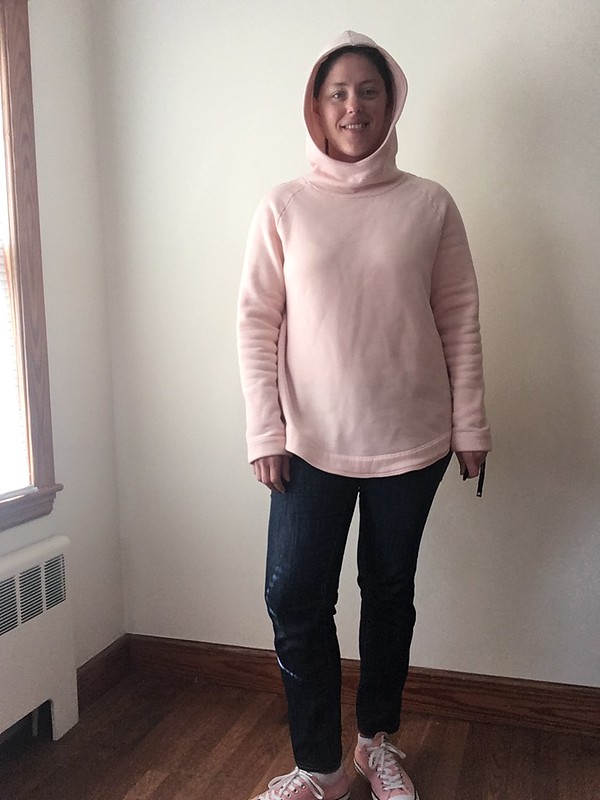 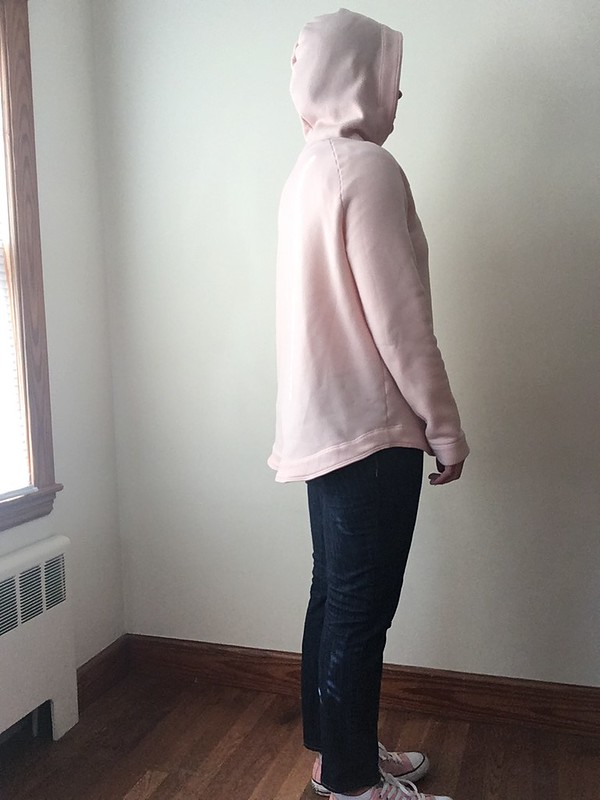 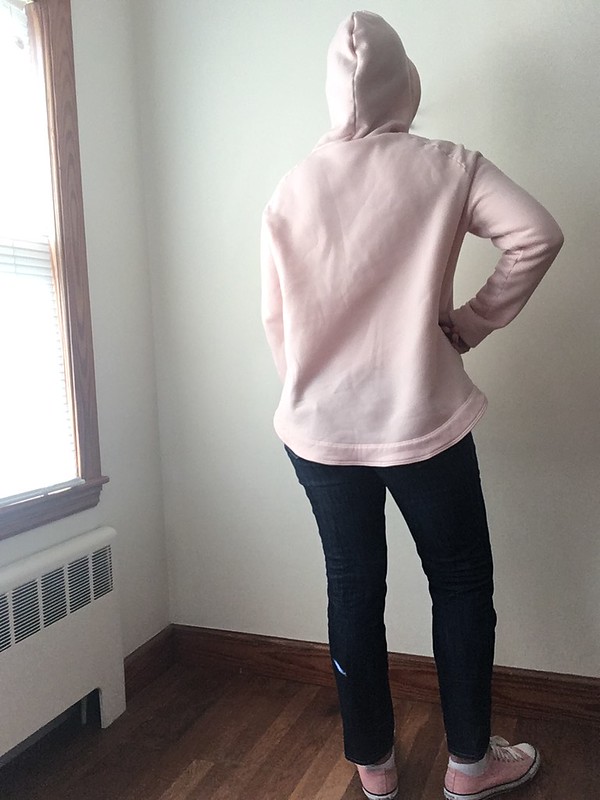 This is my first finished project for my 2018 Make Nine plans, and also my first Style Arc pattern.  I would definitely make this again and hope to use Power Stretch again as well.  For those who like technical details, here they are: 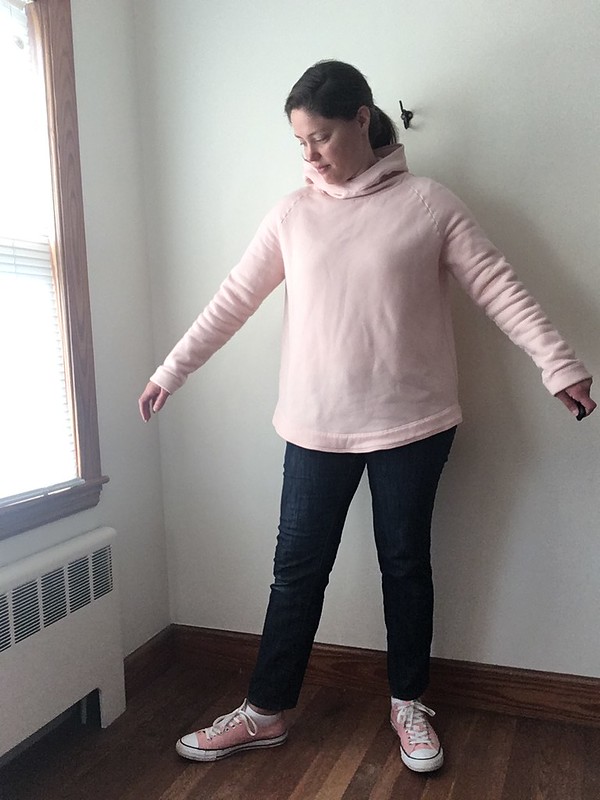 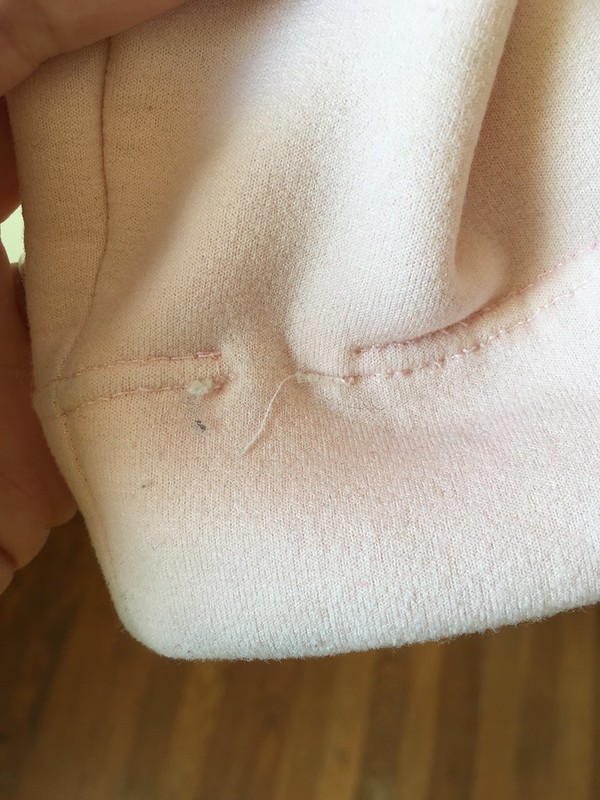 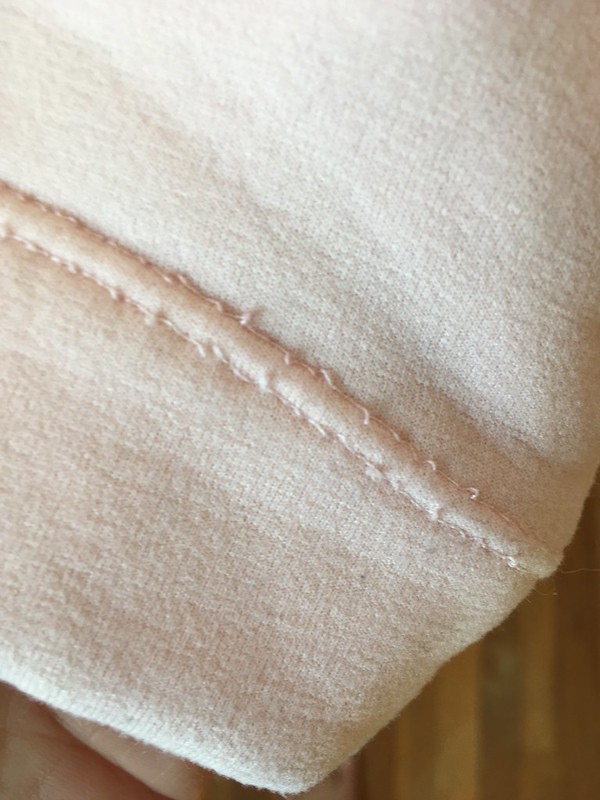 This is a great sweatshirt that is quick to make and great to wear.  I definitely recommend it! 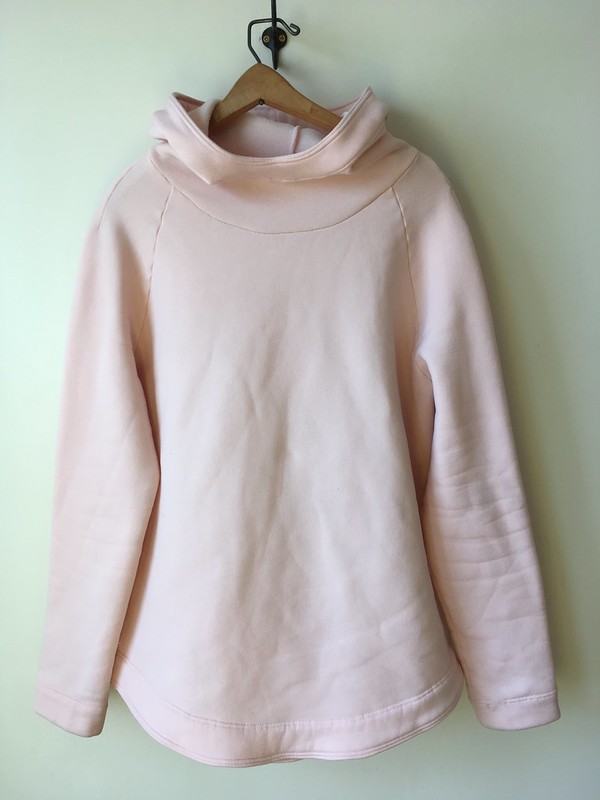 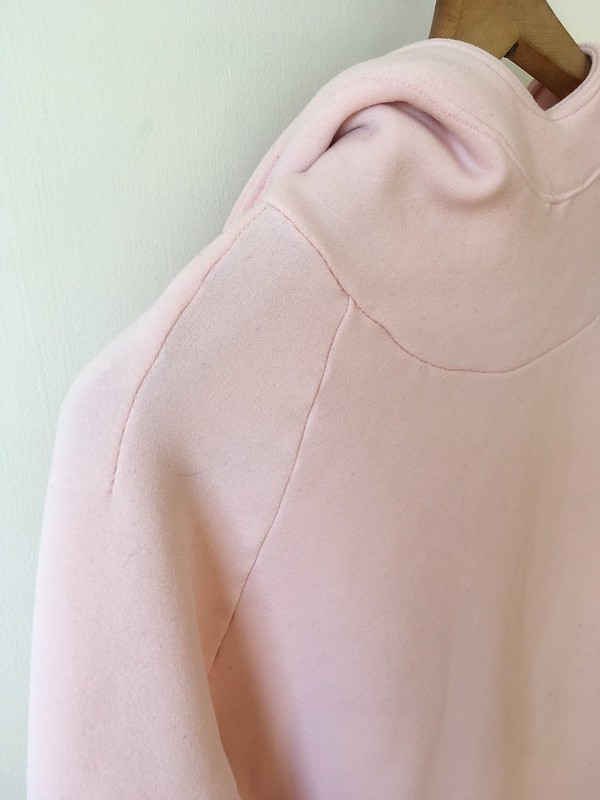 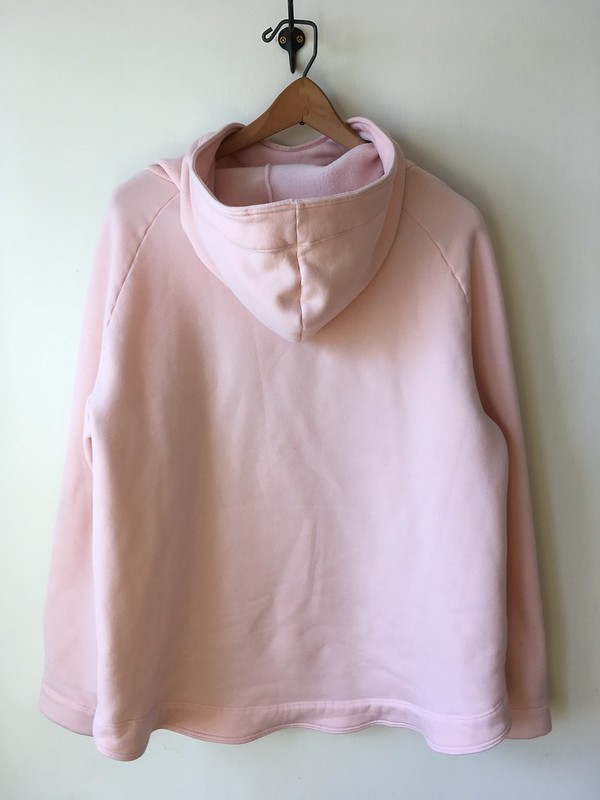 It’s late summer here, and I think it’s time I introduced you to my most-worn shorts of the season.  This year I finally realized that the shorts I’ve been making myself are kind of…well, short.  This may have been obvious to everyone around me, but it really wasn’t obvious to me until I realized that I wanted some longer shorts and only had one pair that I had thrifted.  But I know how to sew, so that’s a problem I can fix!  😀 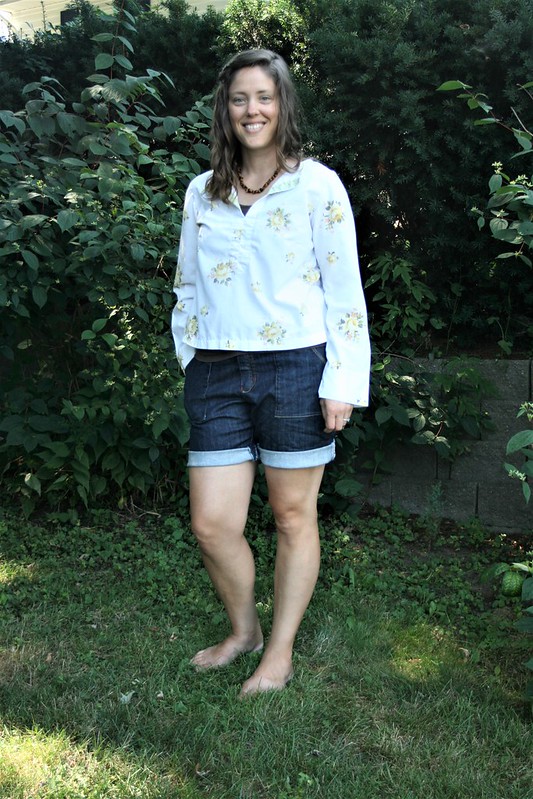 Enter what is quickly becoming a favorite pattern not only for my husband (see versions one and two of his cargo pants from this pattern), but also for me (my pants version is here):  Thread Theory’s Jutland Pants pattern. 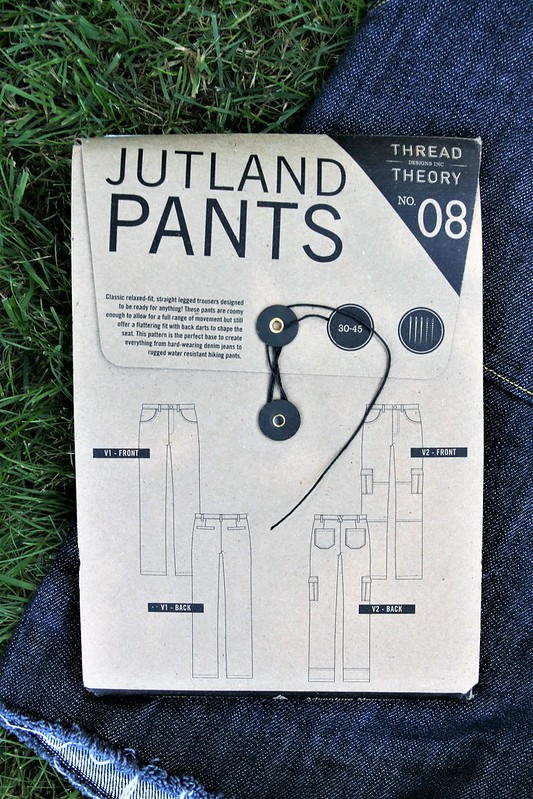 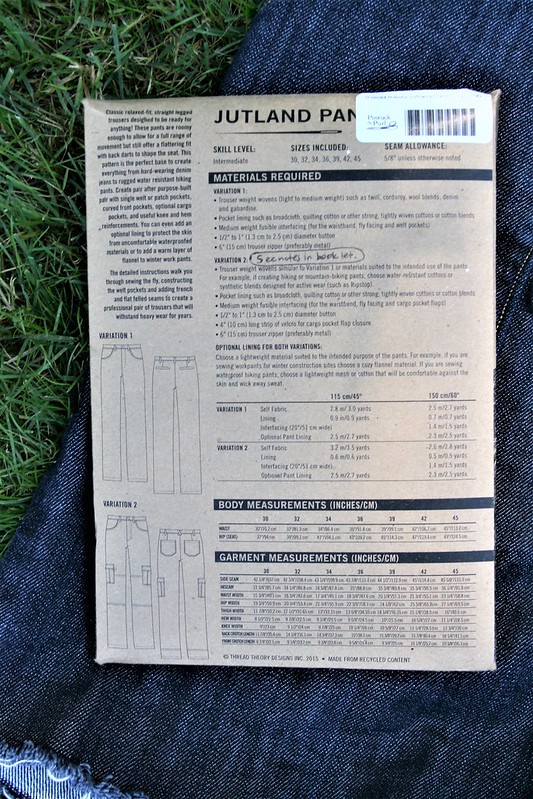 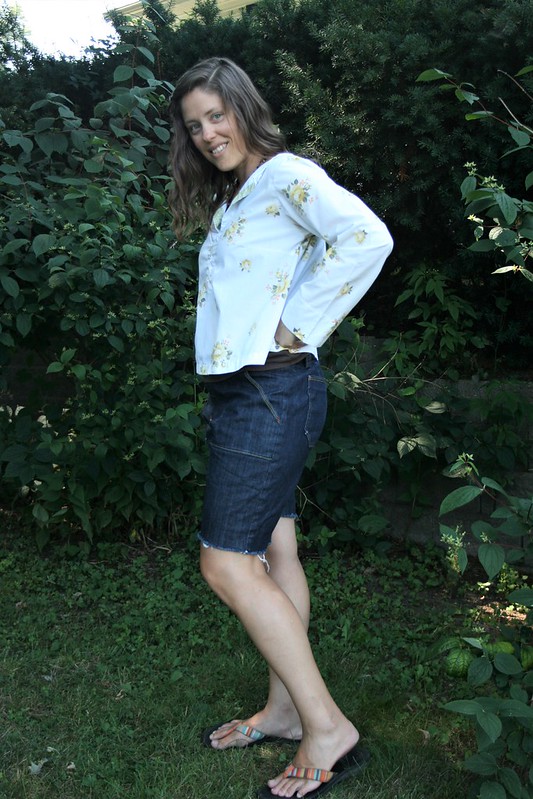 This summer, I dreamed of a pair of long cutoffs that weren’t tight, but were loose and comfortable.  More and more, I realize that I want my summer clothes to be loose and breezy, and my winter clothes to feel like a warm hug.  😉 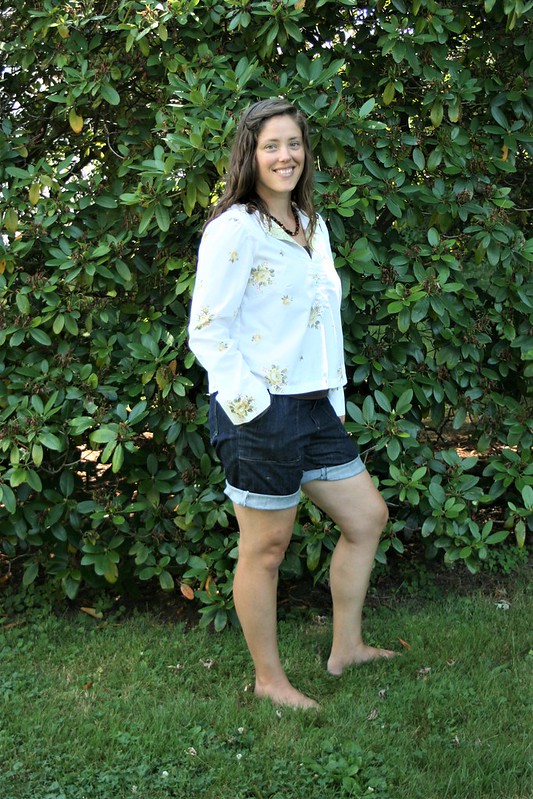 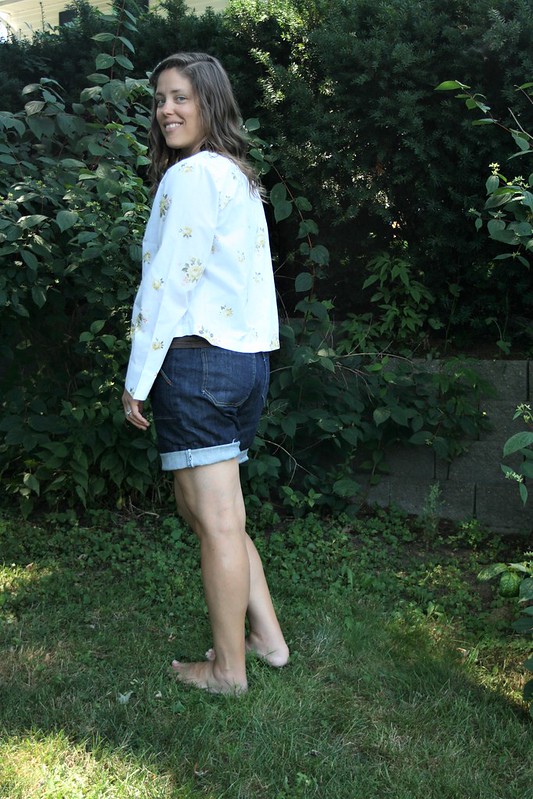 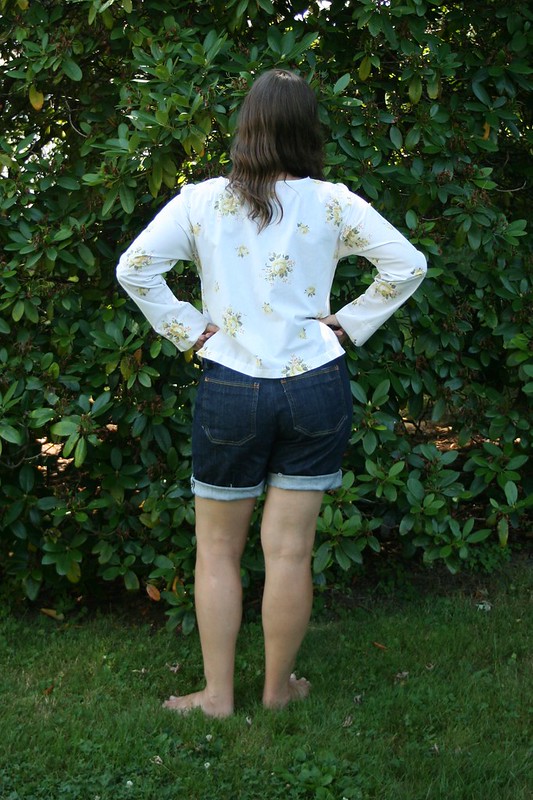 Before our trip out to visit family earlier in the summer, I cut these jeans out of a non-stretch denim that I bought at Fabric Place Basement, and flew through the sewing!  I wanted these done FAST, so I didn’t do much extra top-stitching or any seam finishes beyond zigzagging my seam allowances.  I didn’t even hem them, because I wanted them to look like cutoffs.  I figured that I was making them secure enough to last, but if they showed some fraying and wear and tear, they would have even more of that authentic look.  And let me just say, I LOVE these shorts.  In fact, I have to hold myself back from wearing them every day. 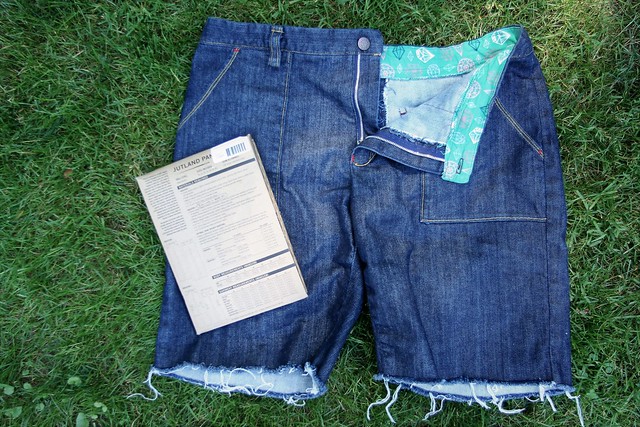 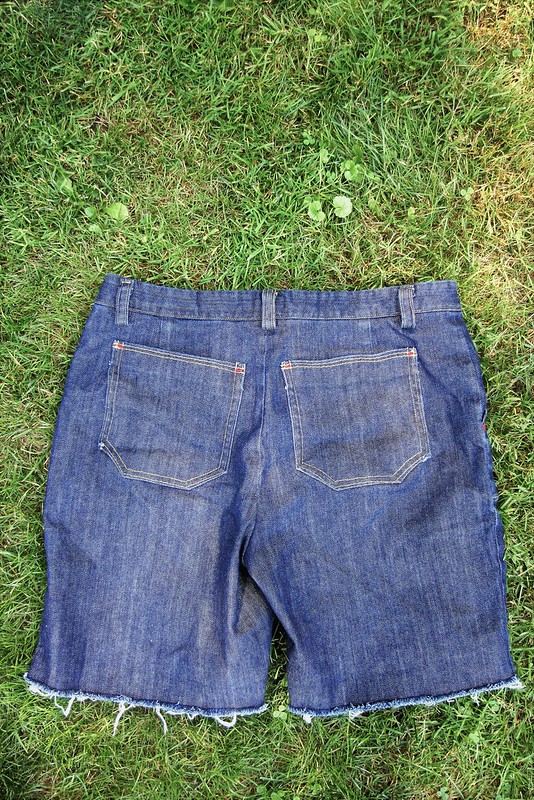 Another thing I like about these shorts is that you can wear them long or roll them up one or two times, giving you some different options.  I probably wear them rolled up twice most often, but I really like all the different lengths I can achieve.  Now I’m beginning to wonder if they would look good in canvas and if I have enough left over from other Jutland pants I’ve made… 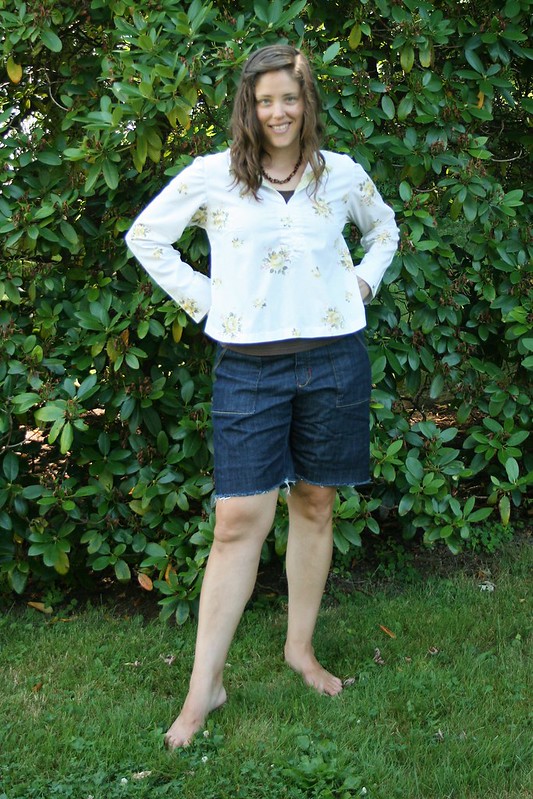 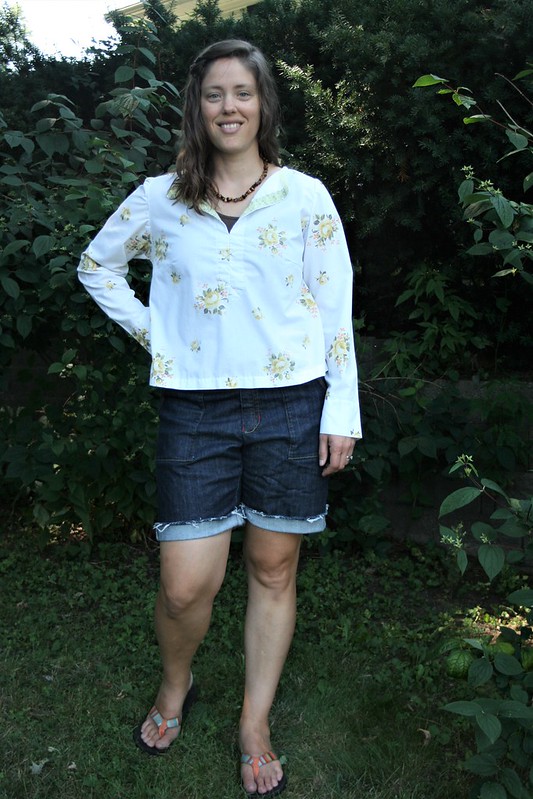 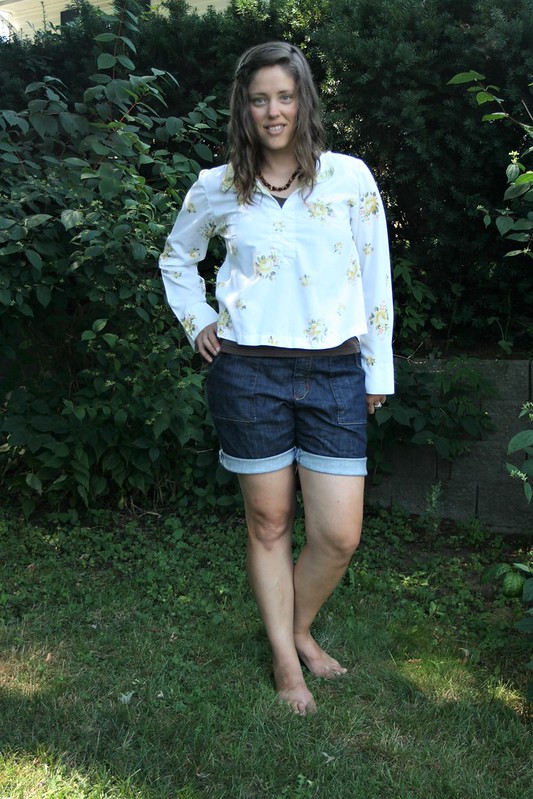 That might be a job for next summer, though.